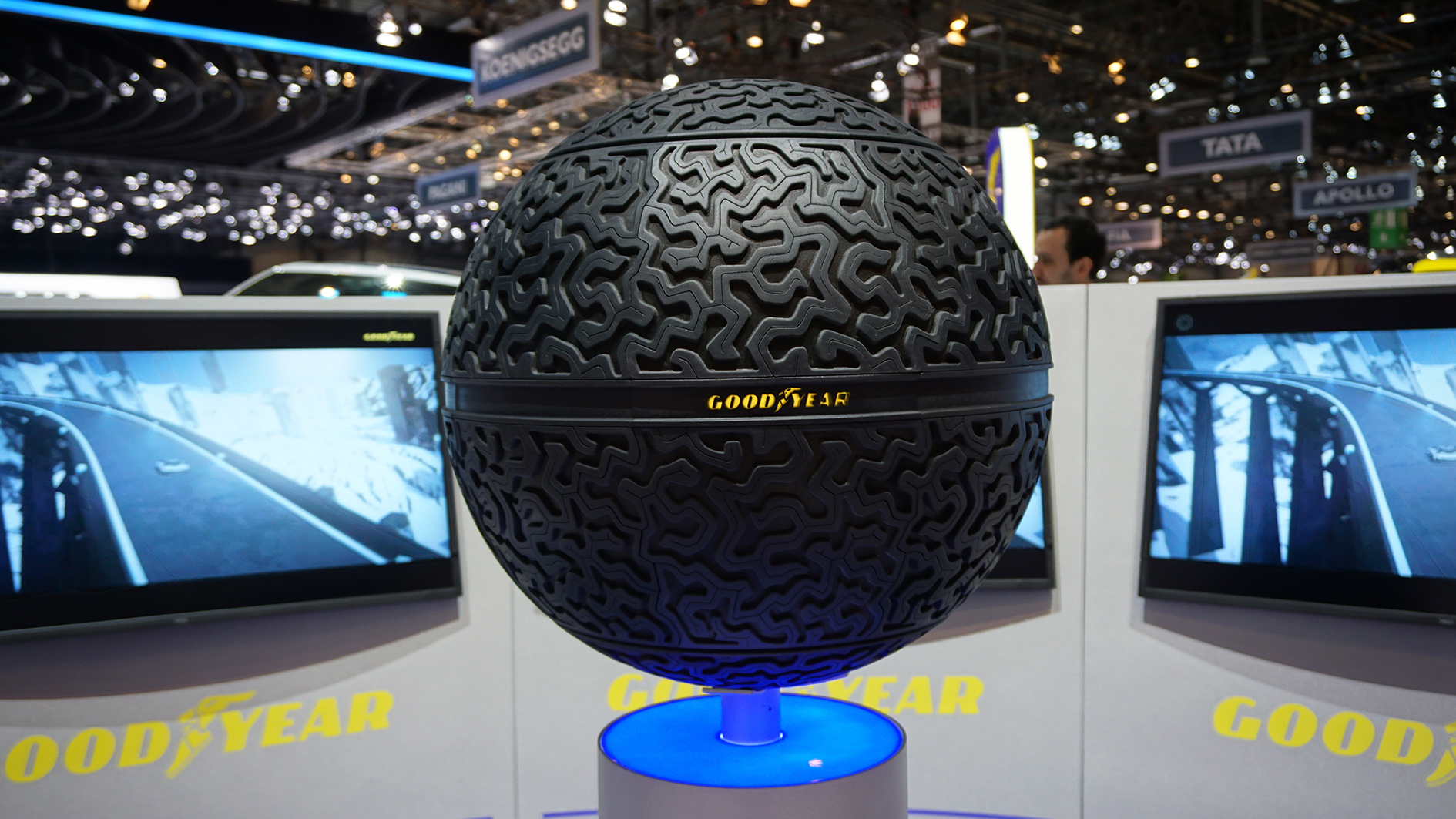 To some of us, this might seem as weird or loopy, but the GoodYear’s concept of a sphere -Eagle 360- tire is actually worth some read. On the surface the concept has many shortcoming (which I will explain later) but it is an unbelievably sophisticated, nature-inspired, magnetic levitation infused ball shaped tire which is being lauded as the ‘Next Big Thing’ in shaping the future of automobiles.

The USP of this tire is its ability to have a larger contact with the ground, which allows more control. The design allows it to hurl the water away from its surface by employing centrifugal force. And just like a trackball, this tire is omnidirectional.

Alright, now that a few lines have been used to describe what it is, we are now going to focus on its purpose, how is it going to fit in a car and lastly what are the current limitations or hurdles in its deployment?

i: First up, what is the company trying to achieve with this Eagle-360 wheel?

Till this day, tires have been used to travel in a limited direction at one point. Today’s cars -as you understand intuitively if you’ve ever tried to parallel park and failed miserably- don’t go sideways, the purpose of this omnidirectional tire is to get rid of this limitation and support lateral movement. In other words, Your car’s limited range of motion means you can’t just pull up alongside an open parallel parking space and roll into it sideways, moving at a sweet 90 degrees to the way you’re pointed and that’s where this tire comes in.

The appeal of spherical tires are pretty clear, to have the ability and freedom to move multi-directionaly is a very efficent way of moving. Just watch Goodyear’s amazing video and see the concept car with its concept ball tires pass a bus without changing the orientation of the car, or recover from a skid by moving the tires in four different directions at once to regain control. As The Inverse points out, car engineers have been dreaming for decades of being able to use this technology. The problem is, just how do you attach a sphere to a car without limiting that perfect range of motion?

The answer is, you don’t. Goodyear Eagle-360 would use magnetic levitation (MagLev) to suspend the vehicle over the tires by a magnetic field.

MagLev isn’t the only reason Goodyear’s bringing back the sphere tire dream, at least in a far-out concept. A car can do much more on these tires than it can on today’s version, but doing so also demands an insane amount of control. When four wheels go in basically the same direction, a person can control them with a steering wheel. When they can go in any direction, you need a computer to manage that. Now that our cars are about to drive themselves, it’s high time to see what’s possible.

iii: Last but not the least, Limitations!

Regardless of the fact that this technology requires lots of research to be implemented, it is however necessary to mention some of the limitations of this technology.

One school of thought believes that this technology will require a flat surface for parking, or a locking mechanism grappling the wheels when the multiple electromagnets suspending the car over the wheels isn’t active. And then there is a school of thought which states that theoretically getting the technology to work would be easier than making it work effieciently for the use of moving vehicles forward (nevermind the safety issues it poses on a road).

Honda CG125 is Being Sold with Ridiculous Own Money