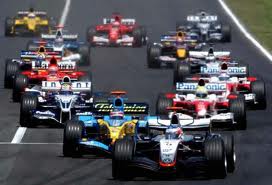 The spirit of competition brings out the best in people on most occasions in life. The hunger for winning & building a lasting legacy epitomizes the element of competition ingrained in the human psyche. The need for speed is another element that drives us to push the human limitations to the maximum & break all barriers. Formula 1 is one such arena where speed is worshipped & is the tool for reigning victorious.

Formula 1 represents the pinnacle of car racing around the world. It’s the ultimate dream for all car racing drivers & professionally is the highest & most respected level of motor racing. The formula in the name refers to a set of rules to which all participants and cars must comply and was originally and briefly known as Formula A. The history of Formula 1 traces its origins  from European Grand Prix motor racing of the 1920s and 1930s but it was not until the 1950’s that the first world championship race was held at the Silverstone race circuit in Great Britain. At the initial stages the governing body of the world championship called Fédération Internationale de l’Automobile (FIA) had to go through many alterations in terms of implementing rules & regulations. There were no shortages of private drivers who operated on their own and who bought and raced their own cars. Nevertheless, the formula was dominated by major pre-war manufactures such as Alfa Romeo, Ferrari, Maserati and Mercedes Benz. Although Giuseppe (“Nino”) Farina won the inaugural title, the key driver in the 1950s was Juan Manuel Fangio who won the drivers’ championship in 1951, 1954, 1955, 1956 and 1957 with five different manufacturers.

Today’s modern Formula 1 standards largely differ from the early days. Now there are explicit rules regarding safety measures, & team regulations as well as the on circuit action. In order to enter a race the drivers must go through the qualifying period which is divided into 3 stages. In the first qualifying round which is termed Q1 for the first 20 minutes all cars together on the track try to set the fastest time & the slowest seven cars are eliminated, earning grid positions 16 to 22. Then we enter the second stage termed Q2 where the 15 remaining cars do another round, their previous lap times having been cancelled. The slowest five cars are eliminated and take the grid positions 11 to 15. The third & final stage called Q3 the 10 last cars fight for the pole position or No. 1 spot on the grid, and qualify no lower than 10th.

Over the years Formula 1 has produced some of the most phenomenal race car drivers who have cemented their names in history forever.  Juan Manuel Fangio set the benchmark with five world championships. However his record was broken by the German maestro Michael Schumacher who won 7 championship titles which included 5 consecutive titles. However after his first retirement the scene become quiet competitive as new faces emerged. These include Fernando Alonso, Lewis Hamilton, Jenson Button, Kimi Raikkonen, and the current three times in row world champion Sebastian Vettel. Although the sport has mostly been dominated by men but there are few women who have dared to challenge the odds and conquer the race circuit.

Five women racing drivers have entered at least one Grand Prix, although only two of them ever qualified and started a race. The woman who competed in the most Grand Prix is Lella Lombardi, with 17 entries and 12 starts. Desiré Wilson became the only woman to win a Formula One race of any kind when she won at Brands Hatch in the British Aurora F1 series on 7 April 1980. As a result of this achievement, she has a grandstand at Brands Hatch named after her.

The new Formula 1 season is on the horizon destined to offer numerous twist & turns. Will a new champion arise or will the dominance of Sebastian Vettel continue who aims for achieving his fourth consecutive title. A exciting season awaits us in March & will surely be worth watching.