Tire Rights in Pakistan; a guide for buying the appropriate rubber

Whether you own the most prestigious car out there with top of the line features or the cheapest thing to commute from point A to B, its only contact patch with the road is through one of the most important parts i.e. the tire. The correct selection of tire would make one of the biggest differences in your ride’s safety, comfort, economy, handling and for some the looks also. While we invest quite heavily in getting the best car we can within the available budget and getting accessories which would result in no added benefit compared to those a good quality tire would, many people accord less importance to this area where in fact saving some expense on it is a bad option altogether. If a tire explodes while driving there is not much one can do to control the car and it results in very serious consequences, so it’s a good idea to do whatever can be done to avoid this beforehand.

Knowing the correct size of the tire for your ride is essential, it is printed on a sticker affixed on the car’s body near driver’s seat. Any deviation greater than 10mm in tire width would mean you would be compromising on the car’s economy while putting extra strain on the suspension also, plus the wider tire might not be safely mounted to the genuine rim leading to incorrect and unsafe use. Moreover in order to move to wider tires, switching for cheap, heavy and unsafe alloy rims is the worst thing you can do to your ride, so please refrain from it unless you are ready to buy good ones which cost a lot.

As shown in the picture, P215/65 R15 means that the tire is 215 millimeters wide, the profile of the tire that is the height from rim to where the tire ends is 65 percent of 215 i.e. 139.75mm in this case, and the digits after the R (for radial) depict the diameter of the rim on which this tire can be mounted.

As an example, the new Honda city comes with stock 175/70 R15 tires. Switching to a set from a good brand with specification 185/70 R15 while removing the euro star that it came with would lead to added advantages with no harmful outcome since the later are of really bad quality, although deviating more than that would mean you are ready to sacrifice many good factors as mentioned before. Sometimes a little deviation from the original profile for a slightly higher one is required in order to enable the car to safely maneuver through the potholes and speed breakers (pretty much car breakers) in the locality you live in. A little deviation in the profile would affect the speedometer reading a bit, but this would not be much and neither are they calibrated accurately in most cases.

If the tire shop owner tells you it makes no difference to jump to wider tires e.g. 195/65 R15 in this case, and you would not find the size you are looking for anywhere, interpret it as he does not have them in stock and look elsewhere as it would benefit you in the longer run after all. Size availability is a problem for recent imports which have really different requirements, for the local assembled ones this is not a problem.

Choosing the Right brand that suits your needs:

Apart from the size, there are many other aspects related to tire selection. The tread pattern, rolling resistance and rubber compound are the major ones among those but you do not need to study all that just to buy a tire, generally the appropriate brand selection would suffice. The premium brands available in our markets are Continental, Michelin, Yokohama, Dunlop, Sumitomo, Hankook, Kumho etc. But do check the exact series you are buying for example all Dunlops are not the same, the best bet is to search for reviews available on the internet and you would get many details for the specific series you intend to buy especially the year that series was introduced. Plus the country of manufacture also counts, a continental tire made in Europe would be expensive than the one made in Malaysia so would be a Japanese made Yokohama or Dunlop compared to a Malaysian or Indonesian. The product coming from the company’s actual origin is mostly the most superior.

Building on the example of Honda city, the options available in 185/70 R15 are many and it comes down to what your priorities are and your budget, a set of Dunlops SP300 made in japan would currently cost around Rs.7300 per tire while a Malaysian made continental CC5 would set you back Rs.10000 per tire, while the same CC5 made in Europe would cost Rs.12000 per tire. If you travel through the motorway most of the time and quietness is a very high priority then spending on the Continental’s makes sense, otherwise these Dunlop’s are really good value for money. The Japanese made SP300 are again a bit expensive then the Indonesian ones and from the other Dunlop series like Eco, LM 702 and LM 703.

One crucial thing that should be checked when picking up a tire is the manufacturing date engraved on the sidewall, since rubber degrades over time, dries out, cracks and eventually, fails to hold air or explodes. Even if this extreme condition is not faced it would not work as a good tire and deliver a rough ride, increased braking distance and other disadvantages and safety risks. 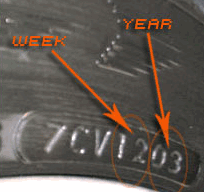 The manufacturing date is engraved as a four digit code e.g. 1203, the first two digits are the week number (12th in this case) and the last two the year of manufacture (2003 in this case). But it is very common in our local markets that expired tires are re-stamped (which costs around Rs. 150) which is a fraud, leading to expired stuff being sold at the price of new. Such re-stamping though can be checked firstly by comparing different brands of tires on the shop since all manufacturers have a different font of engraving; if the font appears same for different brands available at a shop then something is fishy. Rubbing the date code would also lead to the fake stamp wearing off, this should sound some alarms. But the best way is to purchase the tires thorough a reputed dealer, since the professionals would come up with reasoning which might convince you to buy even the expired stuff.

The Right time to change:

If you are wondering whether the set of tires on your ride needs replacement or not, first check the tread wear indicator which is a small hump between the gaps in the tread shown below. Even if the remaining tread is very close to this raised surface it’s time to change the set. One can also check the tire for manufacturing date if it’s more than five years old or for visible cracks / swollen sidewalls. Every tire has a different tread wear and there is no rule of thumb here in predicting when a change is due, generally passenger car tires are good for fifty thousand kilometers if used properly and rotated every ten thousand kilometers ensuring uniform wear for all four of them. 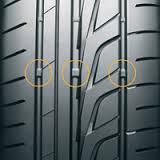 The not so Right choices:

A very common sight these days is directional tires mounted in the opposite direction, first of all there is no passenger car available here that needs such tires since performance handling isn’t possible by just putting in a set of tires. These cars are made to haul passengers and they need good comfortable set of tires to match this criterion properly, so stick to the normal ones which are also quieter then directional. But if you really have gone the extra mile which was in the incorrect direction, please do read the arrow on the sidewall to ensure that your passenger car delivers positive “performance” while going forward and not in reverse.

Many of the imports recently are coming with winter / snow tires and their owners are adamant that since there is plenty of tread left on them, there is no need to change. Well there is a good reason these are called snow / winter tires, they work in THOSE conditions i.e. extreme winters where it snows. On normal roads they are extremely noisy and result in horrendous fuel economy, so take them off…..now!

While picking the most appropriate tires for your specific ride, one very important factor has nothing to do with the ride actually but the condition of the roads you mostly ply your vehicle on. A tire that might provide the most comfortable ride on nicely paved road might prove to be an incorrect selection as soon as you come across patches of broken roads in dilapidated state, the soft sidewall would puncture or even face cuts that are irreparable (sidewall puncture lands a tire in unsafe category anyways). Therefore keeping in mind the kind of roads we have to travel through occasionally, this aspect has to be considered that the tire is able to withstand the abuse expected. Which means that some really soft ones which brands like Yokohama offers in the passenger car category might not be the best shot, unless you are ok with getting replacements very often apart from other risks.

Do get one thing straight, putting in extra wide tires in hilariously under powered vehicles like the locally available ones and specially the “economical passenger car” thought of as a “sports car” i.e. the civic; does not make them look cool! It is unwise to start from and only leads to you paying more for the tires in the beginning and bad fuel average in the longer run apart from other increased maintenance costs and terrible lack of comfort. So stick to the proper size and reap the benefits that the car has to offer as per its intended function instead of sacrificing on them for some assumed ricer advantages. Low profile tires are not meant for these underpowered passenger cars, it is like making a baby wear DMS boots (the ones that soldiers wear) to make him look tough. Neither would the baby be extremely uncomfortable with moving in them while they hurt him, those who look at him would curse you instead of appreciating the intent that you had.

Since this was meant for novices, things like speed, load and temperature ratings were skipped; these things usually are not required to be checked when buying passenger car tires from good brands. For any suggestions you can leave a comment which would be answered as per my best judgment, drive safe and stand up for tire rights.