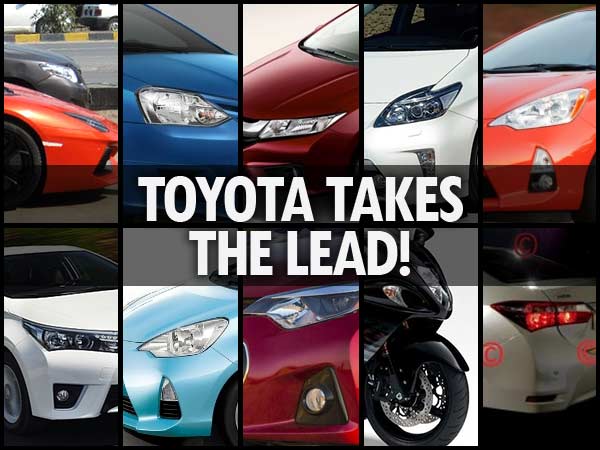 2013 has come to an end, and continuing with our trips down memory lane, we’ve compiled yet another Top Ten List. It’s blogposts this time, and we see some interesting results! Toyota, as always, beats everyone and tops the list again! And that, too, with a significant margin. Scroll down and take a look back at 2013.

10. Pakistan’s First Lamborghini Aventador LP700-4!
It had been quite a while since the last hyper car entered Pakistani territory. This year started out with a bang for the automotive enthusiasts in Pakistan in the first week of February, the Pasban Group of Faisalabad imported one of the most advanced and… [Read More]

09. Pics: 2014 Toyota Corolla launched in the US
The current Corolla came back in 2008 and since then, it has been fighting with Ford Focus to be the best selling car in the world. After more then five years, Toyota apparently realized that they had to let go off the ugliest… [Read More]

08. Indus Motors all ready to introduce Prius Hybrid in Pakistan after July 2013
Babar S. Khan, Head of Corporate Planning at Indus Motors, said that they have completed extensive testing of Toyota Prius Hybrid in view of local conditions. He further added that the customers would now have the option to buy imported brand… [Read More]

07. Indus Motors will launch Etios Valco hatchback in Pakistan
Indus Motors didn’t make the best of decisions when it chose to launch Fortuner instead of a much needed small hatchback since Cuore went out of production. Fortuner sales dropped from 580 units to just 120 in a duration of couple of months due to various factors however, as we… [Read More]

06. Pakistan to go Green – Duties Slashed Off of Hybrid Cars
Pakistan starts on the road to a greener tomorrow. The new government has made significant changes to the import duty structure. According to the budget announced today by finance minister, Ishaq Dar: Electric/Hybrid vehicles upto… [Read More]

05. Indus Motors to launch Toyota Prius by the end of 2013
Market forecasts and trends of local automakers come from the imported cars market it seems; when importers begin importing a particular car. Such is the case with Hybrid cars, as soon as the government dropped the duties and taxes around Hybrid cars, car importers had ready stock to be… [Read More]

04. Suzuki launches heavy bikes in Pakistan
If you’d hide the Suzuki logo and then show the pictures of the launch event to anyone, no one would believe it was Suzuki’s event, the world’s most boring company. The event, as covered by our members was… [Read More]

03. 2014 Honda City makes global debut in India
Honda had announced that the new 2014 City will be unveiled to the world in India where it is the most efficient as well as the most popular sedan. The new City uses Honda’s new design language which comprises of “EXCITING H DESIGN!!!”, and City is the… [Read More]

01. New Toyota Corolla expected to launch in 2014 in Pakistan
We first reported that Indus Motors’ is working on towards assembling Toyota Fortuner locally and it is expected to launch in the first week of March 2013. Although locally assembled Toyota Hilux was significantly cheaper then the imported one, however those who had the opportunity to… [Read More]

New car prices increased a total of three times in 2013