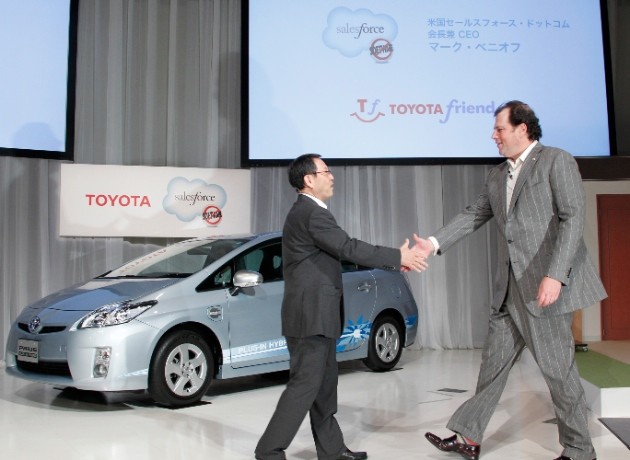 The power and reach of social networks is big and more and more companies are starting to take such networks seriously where word can be manipulated and opinions are drawn. Toyota in light of the disastrous past year has announced to create a social network of its own to help revamp its tampered image.

Toyota has paired up with Salesforce.com, makers of the Salesforce Chatter which is a private social network designed to allow a specific group to communicate. But Toyota Friend, which is the name of Toyota’s social network, will connect owners with dealers, manufacturer and each other. Toyota Friend will even connect owners to their cars with the car’s telematic system. However, all this will be made available in Japan for 2012 initially, especially to those who have bought the 2012 model.

Toyota Friend to Be Powered by Salesforce Chatter

TOKYO, May 23, 2011-Salesforce.com [NYSE: CRM] and Toyota Motor Corporation (TMC) [NYSE: TM] announced today that they have formed a strategic alliance to build “Toyota Friend”, a private social network for Toyota customers and their cars. Toyota Friend will be powered by Salesforce Chatter, a private social network used by businesses, and will be offered, first in Japan, initially with Toyota’s electric vehicles (EV) and plug-in hybrid vehicles (PHV) due in 2012.

Toyota Friend will be a private social network that connects Toyota customers with their cars, their dealership, and with Toyota. Toyota Friend will provide a variety of product and service information as well as essential maintenance tips, creating a rich car ownership experience. For example, if an EV or PHV is running low on battery power, Toyota Friend would notify the driver to re-charge in the form of a “tweet”-like alert. In addition, while Toyota Friend will be a private social network, customers can choose to extend their communication to family, friends, and others through public social networks such as Twitter and Facebook. The service will also be accessible through smart phones, tablet PCs, and other advanced mobile devices.

“Toyota and salesforce.com share a vision to take the auto industry into the future. Social and mobile technologies will transform the car ownership experience, and we are excited to be Toyota’s partner in this transformation.”

“Social networking services are transforming human interaction and modes of communication. The automobile needs to evolve in step with that transformation. I am always calling for Toyota to make ever-better cars. The alliance that we announce today is an important step forward in achieving that goal.”

To date, TMC has developed its own telematics services to connect people, cars and their surroundings. Through Toyota Friend, TMC aims to offer its telematics services worldwide. Moving forward, TMC plans to advance toward the realization of future mobility by teaming up proactively with global IT companies.

Although TMC and salesforce.com will launch their partnership with the building of Toyota Friend, in the future the companies plan to develop cloud services for TMC’s open platform and create new business opportunities leveraging their respective strengths.