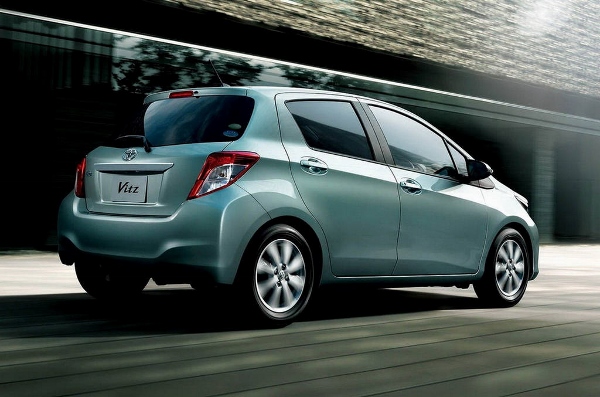 When it comes to buying a subcompact hatchback in Pakistan, the two most popular car models you must consider are Suzuki Swift and Toyota Vitz. Both cars have a huge market share in the country, particularly in the metropolitan cities like Lahore, Karachi, Islamabad, and Faisalabad where people now prefer to drive smaller cars due to heavy traffic.

Toyota Vitz is a line of three- and five-door hatchback subcompact cars produced since 1998 by the Japanese automobile manufacturer Toyota. Now in its third generation, the name Toyota Vitz has been used consistently in Japan, with most international markets receiving the same vehicle under the Toyota Yaris name, or formerly as the Toyota Echo in some markets for the first generation.

The Toyota Vitz 2013 comes in 17 distinct eye catching colors, with the body style designed to give an aggressive and vibrant look. The front bumper provides slots for fog lights with huge headlamps on top, which add to the overall intrusive persona of the vehicle.

Talking about the interior, the Vitz possesses a more outspoken cockpit with easy control that is just within reach. The comfortable luxurious seats offer ample amount of headroom and legroom. It comes equipped with six speaker CD player, Bluetooth streaming for phone and music, USB port and auxiliary jack.

The Toyota Vitz is powered by a 1.3L inline-four cylinder engine that generates 106 horsepower and 103 lb.-ft of torque partnered with CVT Transmission. The estimated fuel economy is about 5.5 liters per 100 kms, although it may vary with the driving habits and other factors

Price in Pakistan ranges from Rs.14 to 17 lakhs.

The Suzuki Swift is also a Japanese made product launched in the year 2000 for the low age-group consumer segment. The Swift was originally available as an imported vehicle in Pakistan, however, due to its immense demand, Pak Suzuki Motors started manufacturing it locally in Pakistan with the name tag of Khyber.

The Suzuki Swift owns a sporty interior that compliments the overall look of the vehicle. It has an integrated sound system with CD + AM/FM tuner and USB socket. The blue and black theme used inside the vehicle makes it more elegant.

Swift is equipped with 1.3 liters M13A four-cylinder petrol engine boasting 90 horsepower and 84 lb.-ft torque paired with a five-speed manual or four-speed automatic high-performance gearbox. The average fuel consumption for Swift is 6.5 to 7.5 liters/100km.

Swift does not offer adequate safety/security features; for instance, it does not have airbags and one has to pay extra to get advanced features.

Since the Swift is manufactured locally, the company offers After Sale Services for their vehicle. The Vitz, on the other hand, is an imported vehicle and does not offer any warranty. The Suzuki Swift is less expensive with company’s warranty is usually preferred by Pakistanis, but it’s wiser for you to select Vitz because Value For money is better for Vitz. It will cost you 2 to 3 lakhs more but it has more features than Swift. It offers a better engine, more comprehensive look and smarter features. Above all, it has a better resale value.

Honda BR-V Adding an Exclusive Taste in the Automobile Biosphere.

The U for all Unstoppable and Successful SUV – Toyota Land Cruiser