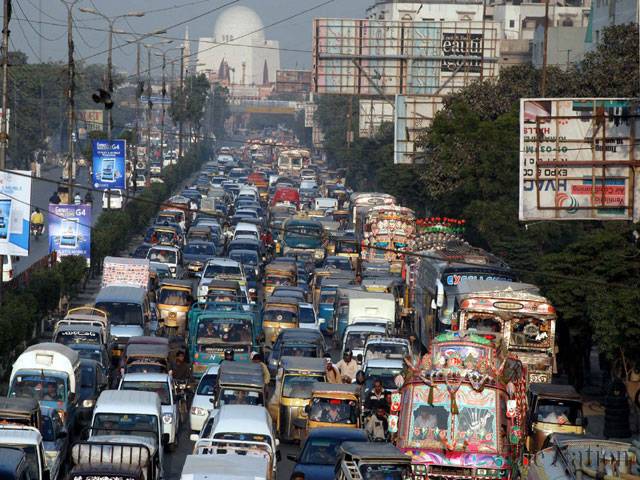 Traffic problems in Pakistan are getting severe day by day. Traffic jams are a common sight in Cities and towns now. Many citizens now waste a significant portion of their time stuck or navigating through these traffic jams. While these traffic jams make people more irritable, frustrated, and aggressive, etc. According to a research by NED on traffic jams in Karachi and their impact on economy, it turned out that each motorist lose 74 rupees per hour sitting in the jam while the city of Karachi loses $ 2.5 billion per year.

This is a serious problem with many more severe effects as well (Such as air pollution, increased accident rate and so on). So who is at fault? Is it the sole responsibility of the government or our people in contributing to traffic related woes of our country? I shall pinpoint some of the causes that lead to traffic jams in our country, some of these are:

The number of vehicles on our roads has increased exponentially.  The increase in vehicles is more than the carrying capacity of the roads. Many (not all) houses have on an average 3 or more cars at their disposal. The recent car financing schemes has added fuel to the fire by further increasing the cars on the roads. People consider it as a symbol of pride to have a variety of cars in their garage.

Another leading cause for traffic jams is that everyone is in a rush. People have the least regard for traffic signals or laws. It is a frequent sight that people try to squeeze through traffic  lights or even go wrong way to head up a queue in case of a traffic jam. Due to one minute impatience of 2-3 drivers, the whole road suffers from a traffic jam of about 1 hour or more. Where is the time saving now?

Drivers and motorcyclists in the most busiest of roads try to go wrong way up through the oncoming traffic because the turn or intersection to join the other side of the road is too far and this way, they think they save fuel but in fact, they lose it because car eat less fuel when run smooth rather brake, gear, accelerate.

Speaking in a general sense, we have one of the worst road networks in the world. The condition of roads is pathetic. Frequently we see water standing or large potholes in place which creates a bottleneck as everyone tries to avoid it. Or some work is in place like new water/gas/telephone lines etc and it makes a double road into a single one and increases traffic congestion.

In many cases, the traffic wardens are negligent in their duty. People not abiding by traffic rules are ignored or not fined. Even people caught not following the rules are set free without any ticket. Often we see donkey carts and other animal driven carts on the road that bottleneck the speed of the vehicle following it. These animal carts are allowed passage in areas where they create traffic problems with the involvement of the traffic wardens. Then there are the bus stops on the most busiest of intersections, like under the KPT bridge at Korangi Road in Karachi.

Probably the most frustrating reason of traffic jams. Every major city has many VIPs which have to travel on the same roads as us. But the difference is that 15 minutes before they pass any area, the road is sealed for normal citizens and the VIPS are given a clean and smooth transit. When the roads open for the public, massive traffic jam ensues because everyone rushes to their workplace, school etc. This should be stopped at all cost, and the so called “VIPS” should be made to travel alongside every other motorist.

Most of the traffic signals are broken or not working. Even those working suffer from electricity outages. When the lights go out and on the absence of traffic wardens, everyone tries his own science and crosses the traffic junction, ultimately leading to a traffic jam.

It would be unfair to place the blame on just the government or the public in traffic jams. Both should accept responsibility for the issue and act in their capacity. The government should focus more on planning & design of roads and maintenance of existing roads as well as establishing a more efficient challan system. Traffic wardens shouldn’t be required to keep some collateral rather the fine should be against you with a proof of your wrong doing. Saudi Arabia, Dubai has had some of the worst drivers and they implemented larger fines and efficient system to control the menace of traffic to some extent.

The public should also show restraint and patience while driving on roads. They can also use public transport more or use car-pooling methods to commute. Encroachments/VIP movement should be removed, and traffic policing made more efficient. Public should also be more aware and sensible even in the absence of traffic wardens. Only by the efforts of both sides can be tackle the issue of traffic jams in our country