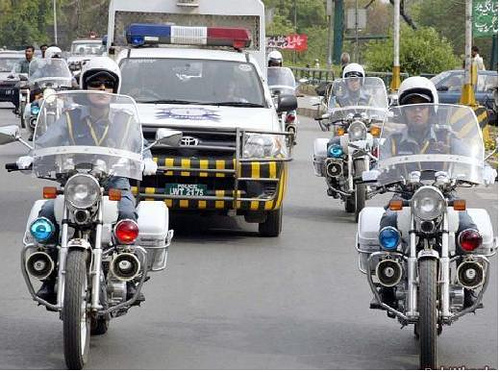 Umar Akmal got arrested due to scuffling with a traffic warden. He spent a night in prison and got his driving license suspended by the traffic police authorities and he was lightly go as such misbehaving with a police official falls as misdemeanor charge and they don’t you go easy.

According to news, he did not stop at a red traffic light even when traffic wardens tried to stop him. And when he did stop, he started throwing verbal and physical abuse at the warden; even tore his uniform. This prompted me to write an article on how to deal with traffic police once you are pulled over to avoid these types of situations, or even increase your chances to go without a fine and just a warning.

Get your attitude right

Yes you have been stopped by the traffic warden, probably because you are at fault! The officer has nothing against you; he is just performing his duties. DO NOT take it personally and cooperate with him. You may be in a hurry or get frustrated, but look in this situation from his perspective as well. He may be standing in the same position for hours under the scorching sun with lower payroll and be more frustrated than you. Don’t let that frustration go down on you by your negative attitude.

Being Umar Akmal could’ve helped him anyways with the warden if he was nice to him instead of behaving like a punk. Maybe offer him an autograph with a smile and apologized by pulling over would’ve worked so better.

Many people when asked for their license and registration start the typical dialogue “Mene kia kea?(what have I done?)”etc, without handing him over the documents. You should act as the traffic warden is in control of the situation and not you. It will help you in pleading your case later on. Not showing the Driving license or car papers will only enrage the warden and lower your chances of getting away without a fine or any other penalty.

Do not tell about yourself

Saying things like “Tujhe pata hai mei kon hun? (Do you know who I am)” will lead you nowhere and will only cause resentment and anger to the warden. Saying you know someone in the police or politics won’t help your case either. For the Warden, hundreds of people say the same thing and they are indifferent to it. Umar Akmal is a well-known celebrity here and probably a hero to many, but did it help him out of this situation? It did not! But maybe it did help in score a century FINALLY!

The only reasonable thing to do here is to apologize and admit your mistake. It won’t make you any less or a MAN you are and will even lighten the mood of the warden. Apologize in a respectable way, tell a reason for your violation (For example some emergency) if you really have one, I won’t promote lying to save a FEW bucks. Apologizing to the wardens have caused me exemption from fines a few times, or reduction from 500 to 300 or so. Well didn’t hurt much did it?

Do not try to Bribe them

Well this is against moral and religious grounds. If you have committed a mistake it’s better to face the music and get a ticket than trying to use Unlawful means then later on, complaining about the corrupt system. Paying a fine will also help you remember your fault and will act as deterrence in the future.

Traffic jams and we’re pretty sure, most of the time people stopped for long by wardens because they don’t have the most necessary documents to present like the license and car’s registration documents and then we corrupt the system by either bribing or not following the laws.

Do not try to Flee

Yea you may have a fast car compared to a bike or no bike traffic warden but never try to escape once he points you to a side. You may over speed and cause an accident further down the road. The warden may wireless your possible route and car number and a warden ahead of you may stop you. You can get imprisonment and get your car impounded. Also it can be a safety risk for you as well as others. It is strongly advised not to run away from the wardens.

So instead of being an Umar Akmal on the roads, follow the rules and drive with absolute confidence because if you have all documents which you must, then the warden will check them and let you go most of the time unless you break the traffic rules.

Prius’s FAQ and myths: Answering the most common ones