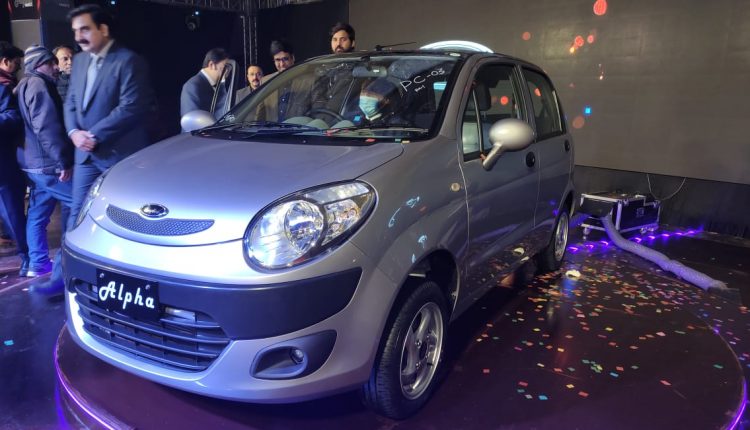 United Alpha is the first car to be launched in Pakistan in 2021. This car’s vital aspect is that it is a much-needed addition in the economic/budget car segment. The company has introduced the car with the price tag of Rs1.4million, which indeed is good. In this article, we will give you a first look review of this new hatchback so that you can make an educated guess.

United Motors have installed 1000cc 16-valve engine, Euro4 compline, meaning its fuel emission is as per global standards. This is the third locally-manufactured car in this segment in Pakistan, after KIA Picanto and Suzuki Cultus. The most important feature of Alpha is its four cylinders, making it more powerful against the Japanese cars in the market, which usually comes with three cylinders.

The car’s front shape is quite curvy, which we think would help in its whole aerodynamics. The hatchback has a Projector Headlamps and a bold front grille. If you come to its side-profile, you will see it is quite curvy. The first thing you will notice is its 13-inch alloy rims.

At the back, the most noticeable feature is its bold backlights and fog lamps. Furthermore, it has a back wiper, which is a great option in small cars in Pakistan. Moreover, the vehicle has a high-mounted brake lamp and reflectors. You can also see a rearview camera at the back, along with emblems of United and Alpha.

The first thing you will see in the trunk is boot separator and Emergency Triangle, an excellent tool in emergencies to notify the traffic that your car has broken down. The company has also offered a spare wheel, placed in the boot.

The space in the boot is quite ample, and you can increase it by folding the backseats.

The second thing that will grab your attention is a 10-inch infotainment touchscreen, which is rather big for such a small car. However, its placement is perfect in the centre of the dashboard. It offers functions like Bluetooth Connectivity, Radio, Media and Clock.

Under it, you will find the AC Control Unit, made with Piano Black Color, and under it, you have 12V Charging Port and USB dock.

If you come to the Central Console, you will find two Coffee/Mug holders, and then Gear Transmission Knob.

Further, the design of AC vents is quite modern, and you will find this Audi-inspired design in a number of recently launched cars, including MG HS and Glory 580.

If you come to storage space, the car has a Glove Box in the dashboard, along with slots in car doors. Also, all the windows and Steering of the vehicle are Powered, another exciting feature for small cars in Pakistan.

The new hatchback has a digital speedometer, which will give you only basic information, including trip and car mileage.

This is the first look or walkaround review of United Alpha, and soon we will bring a detailed expert review of the car, so stay tuned to PakWheels.