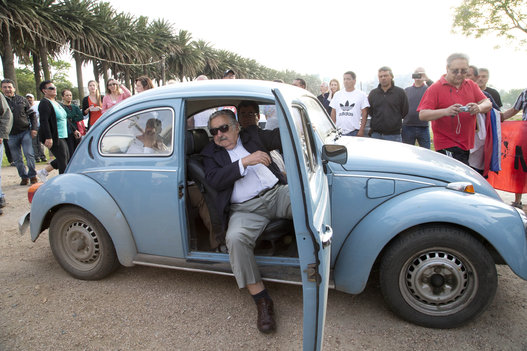 The Middle-East ultra rich Sheikhs are known for buying the cars they set their eyes upon, be it Rolls Royce or Bugatti. But there is one set of wheels beyond their reach: Uruguayan President José Mujica’s humble Volkswagen Beetle.

Mujica recently revealed that an Arab sheik had offered $1 million for his sky blue 1987 Beetle, pictures of which flooded social media when the former leftist guerrilla leader rolled up in it to vote in October’s presidential election.

“We could never sell it. We would offend all those friends who pooled together to buy it for us,” the Uruguay President said on local radio.

The Beetle has become a symbol of the modest lifestyle of the popular outgoing president, who refused the presidential palace to continue living in his old farmhouse and also donates much of his salary to the country’s social welfare programs.

The sheikh offered the Uruguayan President in the June summit in Bolivia. Mujica, known to many Uruguayans simply by his nickname “Pepe,” said that he will consider the offer.

For now, it seems Mujica’s head is not for turning.

“I don’t know if one day the Beetle will go,” Mujica said. “But what I do know is that while I am alive, it will sleep in the garage.” His car is said to be in original and running condition.

The Mulsanne Speed by Bentley