There are many factors which need to be considered when buying a used vehicle which include the mechanical worthiness, appropriate price, originality of the paintwork etc. But there is one thing which holds more importance than any of these, and can land you in the greatest of troubles, i.e. the legal issues associated with the vehicle.

Mechanical / body repairs and paying somewhat higher than the market price would not cost you the money and mental torture which would be faced if you get a car that has some legal glitches associated with it; you might face serious consequences which you would have never thought of just because of an incorrect purchase.

In case a citizen wants to perform some verification of a used vehicle in this land, there are many ways introduced now and utilizing them can be a good approach to save yourself from many serious consequences to some extent. You can begin with the easiest one which requires only sending a SMS on specific numbers depending upon the registration city of the vehicle and you would get an auto reply confirming whether the car is clear or not.

Or entering the registration number on the authority’s website will give you the details of the vehicle as per their record. Although both of these methods would not work for most of the vehicles since the data is not updated and there are also many discrepancies like the color of the vehicle is generally incorrect.

Punjab:
Just send vehicle’s registration number to 9966 and you will receive one text SMS by Punjab Excise and Taxation department, the charges are only Rs. 1.50 per SMS. For any more information about this service one can call on the number 08009966.
For online verification: Punjab Excise & Taxation Department

Sindh:
General public or anyone can get the information about the crime record of any vehicle by dialing the following numbers given by Anti Car Lifting Cell as per the Sindh Police website (http://www.sindhpolice.gov.pk/)
021-99205000, 021-99205683, 0322-2707213
For online verification: Sindh Excise, Taxation & Narcotics Department

Islamabad (Found nonfunctional):
To check you just need to type CNO (not case sensitive, CNO means chassis number ) then give single space and type full chassis no without – or space in between. For example cno abc112233 and send to 8521.

For Punjab and KPK the easiest link to remember would be to visit Pakwheels and click on the vehicle verification link:

After this initial and least hectic process, the next thing you can do so, is visit the offices of some authorities for different kind of verification and get a card / certificate that the car is clear as per their record.

Now that you are done with whatever you could have performed to ensure that the vehicle you intend to buy is clear from any legal issues, rest assured that the risks are still there. Because the data maintained by all these authorities is neither up to date nor do they take responsibility of ensuring that it was clear till a specific date or all across the country. Mostly the details of offenses lodged at some police station, e.g. Tando Adam Khan or Burewala would not be present in any of the databases maintained by any authority, until some day that it pops up somewhere and you are stopped unexpectedly because a decade back some offense was done on this vehicle and it didn’t come to surface till now.

The authorities add a disclaimer on every legal document that they do not own any kind of responsibility and that the purchaser is the one who is bearing the risk of this purchase. The card / certificate contains disclaimers like “as per the computer record of x city” and “not valid for court of law” and the excise office adds “transfer of purchaser risk” to the registration book while transferring the ownership of the vehicle. If at any point in time some problem comes to light about the vehicle then you would be the one who has to bear the brunt of it, and the only benefit of performing all those verifications would be that you can claim in the court of law that “due diligence was performed while making the purchase”. The actual owner as per the legal record would still get the vehicle back if there is an ownership dispute and you would be left only with the sigh of relief that you were not dragged into a legal case as a criminal. Sitting in the office of an authority as owner of a vehicle labeled as stolen or wanted in a case is not a “pleasant experience” and one should be prepared to arrange a lawyer and terms such as “zamanat” would become much more familiar. 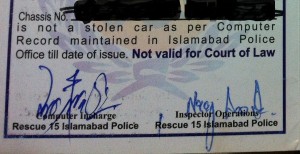 One additional legal protection that one must take is to get a stamp paper written clearly mentioning the date before which the previous owner is responsible for all kinds of legal issues and after which the new owner would be held accountable, this is also a protection for the previous owner as his name would be appearing in the records if the car is not transferred in time. Even a difference of some days makes a huge difference in legal terms and it is an essential step from this point of view.

A very common practice is that all the verification procedures are done as far as paperwork is concerned but if the car’s chassis or engine number is tampered with then you might be checking the legality of a car which was clear but the specific one that you have is not even that car. In some instances even the chassis number is original, its the whole plate that has been welded end to end. There have been instances where even the registration number of a car when verified comes out to be allotted to a bike, so again just getting a paper that the record is clear does not tell the whole story nor does it absolve you of any responsibility.

Although this paints a very horrific picture of how risky a vehicle purchase is in actual, running away from the facts does not do any good. Whenever you own a vehicle and even if you sell it, you become a part of the chain of ownerships over its lifetime and you can be contacted years after you even forgot you ever owned such a vehicle with an issue which might turn out to be a serious problem. There are reasons why people run away from vehicles having authentic but duplicate registration books; even some other things that are not actual issues become a matter of suspicion like the ownership record of a vehicle registered in Lahore might not be updated in Lahore office when its ownership was transferred following all the requirements in Rawalpindi excise office.

Apart from these unfortunate realities, there is yet another problem which many people have to face while performing the “due diligence” which would not save them from any surprises that might occur in future rather can land them into totally ridiculous situations. The reason is the inefficiency and corruption within the authorities which while transferring the entire risk to the citizens also cause them further inconveniences by telling them that the vehicle is stolen or required in a case when it is not so. After being pressurized from police and running around while spending quite an amount (going where you can well imagine because the official offering you assistance will have to bear some “expenses” for rendering this favor) for verifying what the actual facts are, it would come to light that the record was incorrect like the chassis number of a stolen car in a FIR was different and was entered incorrectly as the one your vehicle had leading to all this hassle. This again is not as rare as one might think and may people have faced this “service” by those who do not own any risk even after delivering such an exceptional facility.

So knowing all this, the greatest favor you can do yourself is to be as vigilant as you can be when buying a used vehicle. Since at the end of the day the state would hold you responsible for the thing in your possession and you would have nowhere to run if things get ugly, the sheer incompetence of the authorities which are even charging you for the useless verification would offer you no help rather only aggravate the problems by trying to pressurize you into bribing them also while proving yourself innocent. The officials in these institutions are mostly found to be a part of this illegal car business racket and would have taken care of these issues easily if they genuinely wished to. So purchase vehicles from people you can get in contact with later and does not have too many previous owners, get the proper stamp papers signed and all verification done so that you have the proper paperwork available against all possibilities, and then pray that things remain fine. Be prepared, because ignorance is not an excuse.