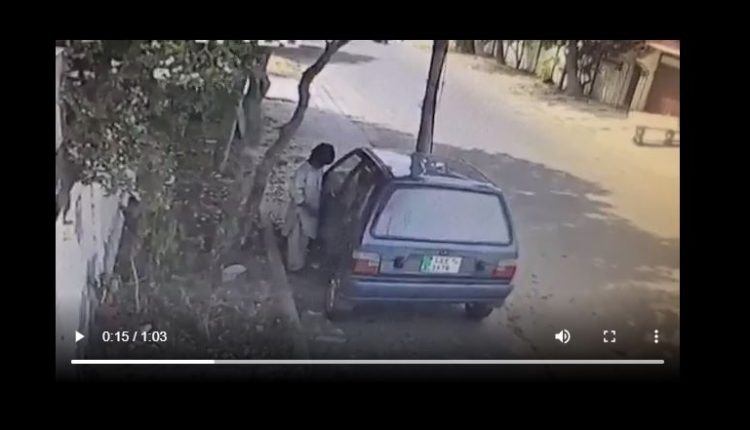 Karachi police have caught a 10-year-old boy for stealing a car for a joyride. In a CCTV footage, the child can be seen breaking the lock of blue Suzuki Mehran, parked alongside a house in Khayaban-e-Mujahid area of the Defence Housing Authority.

In a statement, the police said the child was apprehended from Sea-View area during a routine patrol. The police have also recovered the stolen vehicle from his possession. Talking to media, station house officer of Darakhshan Police Station, Naseer Tanoli said that juvenile thief is resident of Machar Colony.

#Karachi: A 10-year-old boy at Khayaban-e-Mujahid #DHA stole a car. Darakhshan Police recovered a car from #SeaView road & handed over the kid to parents after warning.

The father of the child is drugs addict. This kid had stolen a motorcycle twice before – Police #KHIAlerts pic.twitter.com/NLlfjTTmqe

“The boy is fond of driving, and that is why he has resorted to stealing motorbikes and cars,” SHO said, adding that the minor drives stole vehicles until they run out of fuel, and then he abandons them.

The police officer said, no legal action has been taken against the child due to his age. “But his father, who is a drug addict, was called to the police station and warned to keep a stern look on his son,” Tanoli said.

The media has reported multiple times about the high rate of car and bike stealing in Karachi. According to a PakWheels article, most of the stolen bikes from Karachi ended up in Balochistan, rural areas of Sindh or Khyber Pakhtunkhwa.

The above revelation was made after Anti-Car Lifting Cell (ACLC) caught a gang member involved in stealing and selling of these stolen motorbikes. The thief further revealed that he sell those bikes through a middleman, and most bikes are transported to Balochistan.

He also told police about the rates of stolen bikes; for example, Honda CG125 gets PKR 35,000, 70cc Chinese bikes get PKR 10,000, and, Honda CD70 receives PKR25,000. Since there is no proper checking on bikes from Karachi to Larkana, it makes smuggling of these stolen vehicles very easy for thieves.

This is What Owner Thinks About Honda N-One