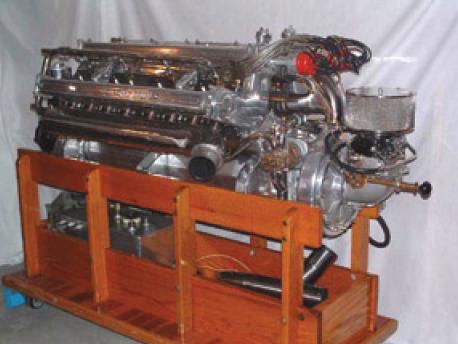 Origin
It was an Englishman, Ernest Henry, who, in June 1912, first conceived the idea of ‘Twin Cam four valve-percylinder engine, known as a 7.6 litre four cylinder. Harry A Miller rebuilt it in 1915 improving it into racing engine like the famous Offenhauser. All the subsequent multi-valve engines originated from this specially designed engine. Gerald Palmer redesigned the original twincam engine in 1953 and named it MG ZA Magnette. The ZA Magnette with 1489cc BMC ‘B’, the four cylinder Ohv engine Series was then offered to public use. This engine, which was originally produced with 60bhp, later improved to 68bhp. The ZA was a fine sports saloon of its day, but Palmer, not yet satisfied with its performance, tried to build a twincamshaft engine of his own design. Things did not lay idle for long though, as both the ‘Austin Design Office’ and ‘Morris Engines Branch’ were granted permission to design their own ‘Twin Cam’ engine.

Mechanism of Twin Cam engine
The air inlet is positioned either at one side of a headlight or under the mudguards instead of under the bonnet so as to suck air from relatively cooler places. The ruleof- thumb is that cold air, which has greater oxygen content for a given volume than hot air, gives more power (increase of 1% power for every 2°C temperature drop). But this does not allow inlet pipe to suck the rain straight in. In view of need to keep ridges or lips away from the area of inlet valves, the inlet manifold has to be matched accurately with the head. Also a thin layer of silicone gasket sealer instead of a common gasket is used between the manifold and the head so that the gap between them is kept according to the standard.

The Combustion Chamber
The best shape of chamber is one that has the inlet and exhaust valve at a smaller angle to each other, so that the air is stirred without having to go over the pistons. The twin cam engines like that in older models of Suzuki GTi, have a 45° to 50° angle between the inlet and the exhaust valve, and they would benefit greatly by reducing it to around 20° to 25°. By keeping the valves at a shallow angle, high compression can be acquired without resorting to highdomed pistons.. The sides of the combustion chamber are usually flat, and should cover a similar section on the top of the pistons, so causing a very important ‘squish area’, which creates the sort of turbulence we need to get greater power.

Fly-cuts are made such as to accommodate the valves. They are kept narrow and smooth as possible so that pre-ignition is not caused due to hot spots by sharp edges. Another important area in Cam engine is the squish area, which is a part of the combustion chamber and is made to come into close contact with the piston when the piston is at top dead center. There’s usually lessthan 0.030” (0.75mm) clearance in these areas in such cases. The object is that combusting gasses may rush speedily towards the center of the combustion chamber and increase turbulence, thus increasing the combustion rate.

The experiments with so-called open and closed combustion chambers, conducted by Ford & Cosworth found that a well-designed closed chamber always made more power.

Take Toyota 4AGE for example. The only advantage the shim-overbucket system has is that it’s very easy to change the valve clearances without having to take anything apart. This is exactly what the shim-under-bucket system also requires. Problems in twin cams started with big cams were installed. A typical standard cam might have duration of 230° from seat to seat, and you’ll start to make interesting power as the duration climbs above 270°. A full race cam might go as high or even more as 320° duration, and if the engine is properly tuned it can be driven on the road still safely with this speed. On early cars, the starting handle dog on the front of the crankshaft could foul the steering rack. Dynamo brackets would crack, so MG issued stronger cast-iron items. The gearbox ran very hot, and if its breather blocked up, the expansion of the oil could cause leaks.

Experience with racing the Twin Cams over the years has led to the possible cause of the piston problems. After all it was not the timing or plugs, but simply fuel starvation at certain rpm, giving a very hot, weak mixture. The cause was fuel frothing that leaned out the mixture, and then burnt out the pistons. The solution was soon found i.e. either use Webers, or have the SU manifold machined to take the Weber rubber ‘O’ ring from the 45 DCOE. This fits the SU H6 bolt pattern. The slightly flexible joint that results cures the vibrations. But despite some of inherent problems with Twin Cam engine as these, the engine was still considered fantastic and the best of all the contemporary engines. Overhead cam, multiple valve engines were first perfected in the uniquely American racing cars of the 1920s. Then America had the fastest cars in the world. In 1915 in Chicago, an inaugural race on one of the new board tracks produced a winning speed of 98mph. In 1927 Frank Lockhart set a closed-course speed record of 147mph on a board track at Atlantic City. . It was again in 1920s when there emerged in the US, a pantheon of brilliant American racing engine designer like Harry Miller, the Duesenberg brothers, Louis Chevrolet, Leo Goosen and Fred Offenhauser.

But a quarter-century passed before anyone, anywhere, could challenge the closed-course speed records set by American twin cam racers on board tracks. In the mid-1980s, automotive engineers “discovered” multi-valve engines. A horsepower race that had developed led car companies to design more powerful and efficient four-cylinder engines. Alfa Romeo built its first twin-cam engine as far back as 1914, a oneoff 4 1/2-liter four-cylinder Grand Prix engine, but it never ran in international races. Le Mans fell to Alfa from 1931-34 with Jano’s next design, a 2.3-liter straight eight with double overhead cams. In 1934 Jano’s six-cylinder twin-cam 2.3-liter engine became the Alfa engine of choice and remained in production into the early post-war years. Mercedes-Benz began experimenting

The beginning of the 1950s also saw the introduction of the new 1900cc four-cylinder from Alfa Romeo. Lightweight and powerful, the 1900cc engine formed the basis of Alfa powerplants for the next three decades. The 1300cc twin camcame in 1954, followed by 1600cc, 1750cc and 2000cc versions. . Ferrari joined the twin-cam ranks in 1949 when Aurelio Lampredi converted Gioacchino Colombo’s single-cam V12 Formula One engine, but it wouldn’t be until the 1960s that a Ferrari GT car would be available to the public with a twin-cam engine.

The earliest of the Toyota Twin Cam productions were the 3M and 9R engines that were produced during 1966 to 1969. The Corona 1600 GT was the original Sport Compact. In 1984, the 4th generation 4 valve Toyota Twin Cams, 4AGE/16 and 1GGE/24 were released. This production by Toyota showed its superiority over rival car manufacturing companies in Japan in so far as design in Twin Cam engine is concerned. All subsequent new Toyota engines: the NZ (under 1500cc), the RZ and TZ (above 2000cc) 4 cylinder engines; the MZ V6 and UZ V8, were all introduced with F Type Twin Cam heads and were subsequently upgraded to VVT specification. Most of the current Toyota engines use an F type cylinder head, enabling Toyota to continue the claim- world’s leading supplier of the Twin Cam engine design and the V6 and V8s. The Toyota Twin Cam engines have been produced in more variations: 1000cc to 5700cc; 2 or 4 or 5 valves per cylinder. The Prius 1NZFXE 1500cc proved Twin Cam compatibility for Hybrid applications. The new 3MZFE 3300cc has already been combined with Dual electric motors in engineering studies. “Electric Supercharger” is the operative term for the future.

While Pontiac Grand Am continued to inject high-quality performance into the compact coupe and sedan market. The Grand Am comes complete with a 2.2-liter twin cam engine that delivers 140 horsepower and outstanding fuel economy, getting almost 33 miles per gallon on the highway. The Toyota Camry was redesigned in 2002, making it roomier, quieter and more powerful than ever. An all-new twin cam, 2.4-liter, 157-horsepower engine powered the Camry. Add daytime running lights, a full-size spare tire, standard AM/FM CD and cassette stereo, made the Camry a high-end sports sedan. The carmakers remain hopeful that the sleek redesigns, heightened performance and added equipment will pull their cars ahead of others from the current pack of Twin Cam engine cars.

Here are Common Mistakes in Selling of Used Cars

The Largest Collection Of Toy Cars In Pakistan