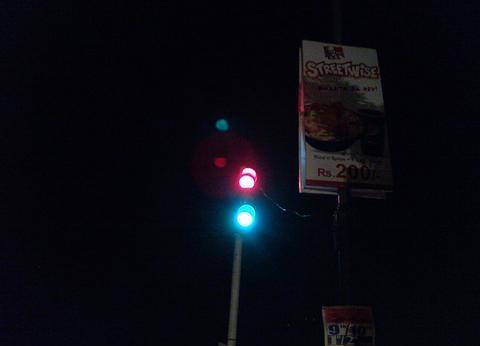 Pakistan, my country, is neck-deep in debts, our economy is languishing and we are always looking forward towards foreign aid. Cost-cutting, we’re not really interested in that as evident by our actions. My first observation in this regard is that most of our street-lights installed recently in Karachi aren’t turned on at night, some of us knew it beforehand, so my question is why spend on them when you’re not going to use them? Then you have tens of signals installed on each major intersection, but we’re responsible for those more signals, because we the road users, don’t wait behind the zebra-crossing, hence do not have any sight of the main signal above us, because of this, the Gov. is forced to erect another signal infront of us so that we can see the light, just one signal could’ve done the job if we had respected the zebra-crossing.

Now, Look at the signal installed at a continuous flow intersection (CFL) or crossover displaced left-turn (XDL) as it is called which many of us don’t even know. They parked their buses infront of it, we can’t see it now, and however, we don’t listen to it anyways even if the bus weren’t there. Whereas the signal at this CFI is known as dedicated left-turn traffic signal which is not necessary at alot of places around the globe and specifically in Pakistan to be installed, but here it was. It was a necessity because of the traffic load. But does any driver know that there is a signal here? I mean how can they know when queue of giant coasters equivalent to the size of ‘the Rock of Gibraltar’ stand broadly curtaining the signal from the driver’s eye, and even the Police who make sure no one abuses the law are found stalling for a cup of tea right above the so-called-something-in-the-wild-wild-west, Zebra-crossing.

There are so many useless things installed on our road-network where other simple board-signs or techniques to ensure traffic flow and safety should have been used. For example, the ‘Stop’ sign could be used here instead of the left-turn signal. We just not waste money on these signals and street-lights, we waste electricity as well.

Indiscipline traffic is another argument; however the lawlessness on this intersection further disturbs the discipline of the traffic. As they say that not all the fingers are equal, perhaps only few are out there who act blind towards traffic signs (I hope I am right), but it is quite sore to see the ones given the authority to ensure law, correct our economy ignore cost-cutting, when we can simply use our observation to help not waste our money and electricity as well. But they do not hear, see or believe in it and accept other’s to follow or they will come to punish and enslave!

Keeping an RX 8 in Pakistan

Which Is Better: FWD or RWD?