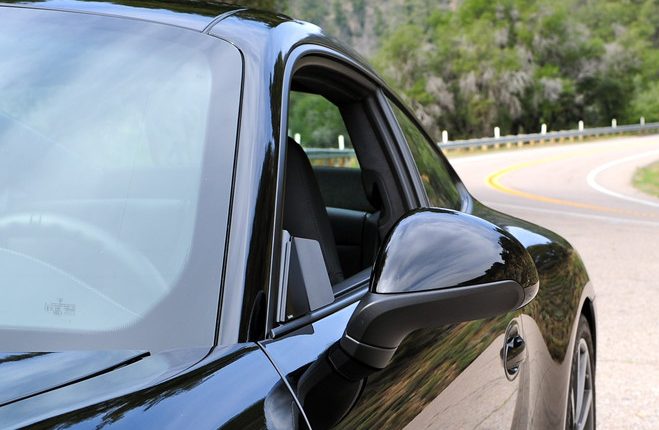 I am sure you have experienced it in your car and on highway speeds when all windows are closed, and someone opens one window, especially the rear window. What is that annoying ” pulsating/ dhub -dhub noise ” ??? A few days ago, I was able to record this sound in my vehicle, and I thought I share it with my readers and the reason behind it.

It is our loving subject, Physics. The phenomenon is the same as when you blow on top of a soft drink bottle and hear a sound. It is called “Helmholtz Resonance”, described by Hermann von Helmholtz, a German Physicist in 1850s.

When there is a single entry point for air , and the incoming pressurized air pushes an air already present in an enclosed medium and a car interior in this case, this interaction of incoming air with the air inside the car cause this phenomena. This happens when you roll down only one of the rear door windows to a certain level, the interior air is pushed  out with force of the incoming air and it comes out of the car from the same entry point.  Air vortexes are generated around the window opening.

When the wind’s timing, going inside the vehicle and coming out of the vehicle matches, the resonance effect is achieved. This resonance due to compression and decompression of the air pressure, create this sound. If you open any other window, the effect goes away because the air finds another exit point. This Helmholtz Resonance, created in our cars, is knowns as “Side Window Buffeting “ in the automobile industry. It is also known as helicopter effect.

The buffeting sound starts at certain speeds, and it can increase with the vehicle’s speed and can eventually die down at very high speed. In other words, buffeting is generated by pressurized air with high noise intensity of above 100 decibels but has a low frequency of around 20 hertz. The noise can be very uncomfortable and disturbing for the vehicle occupant as it creates a lot of pressure on the eardrum and can cause headache & fatigue.

Every car and especially newer cars produce this effect, but it depends on the vehicle’s shape, speed, and drag coefficient. The modern cars are more fuel-efficient, aerodynamic and fluid through the air so, opening the rear window can bring a lot of air inside. Cars are designed for aerodynamics with the window closed at the designed stage, and window buffeting is something last thing on the priority list.

New cars are also more insulated inside as well, and window buffeting is a lot more pronounced. It is a necessary EVIL. The best way to deal with it is to open another window and let the air find a way out or just keep the rear windows closed. Buffeting also goes away at higher speeds, but I am sure you don’t want a speeding ticket. Researchers are working on different methods to reduce and eliminate this effect.

The front windows do not usually create window buffering because the headway wind is obstructed and diverted upwards by the windshield. Secondly, the side view mirror disturbs the airflow away from the front window until they get concentrated again and pushed towards the rear windows. The sunroof is another entry point for air to create buffeting, but the air draft is diverted via the screen on newer cars, which comes out vertically when opened and makes a wind deflector.

By the way, the subwoofers and many other acoustics devices are also designed on the same principle of Helmholtz Resonance. Let’s close the windows, and hear a beat out of that subwoofer in your car.

Have you experienced BUFFETING in your car and how bad and annoying it is? Share in comments.

Want to Buy a New Car? Follow These 10 Tips