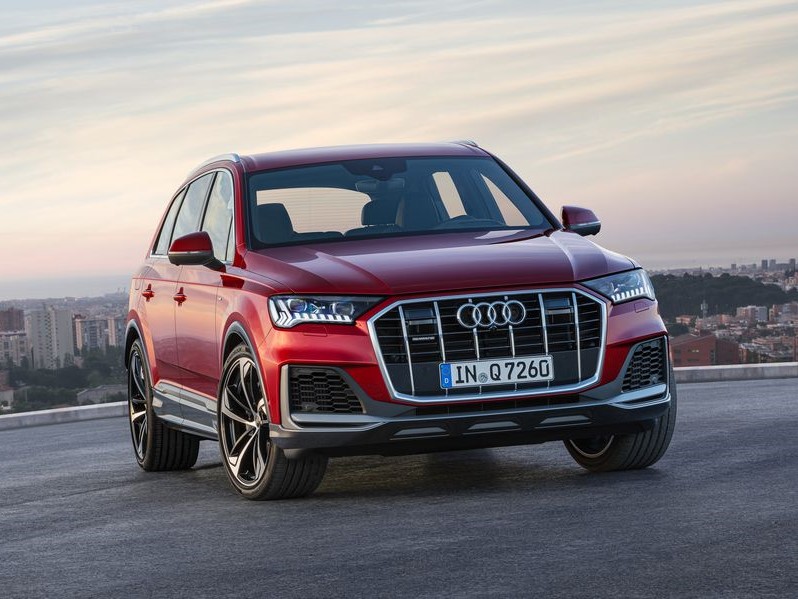 In the automotive industry of today, premium crossovers and SUVs have, for the most part, replaced executive sedans as the go-to luxury vehicles. With the exception of the Mercedes-Benz S Class; BMW 7-Series, Audi A8, Lexus LS, Jaguar XJ, and all other iconic luxury sedans are all outsold by their crossover siblings. As a result, automakers compete fiercely for this high profit segment of cars. The Audi Q7 has been a dominant force in this market; let’s see how Audi has fared while redesigning it for the 2020 model year, to keep up with the ever-increasing competition.

The looks of the last generation Audi Q7 did not do it any favor. Indeed, it looked like a tarted up minivan that had been raised above the ground and could not stand up against the competition that included the ostentatious BMW X5, Volvo XC90 and the Land Rover Range Rover. It is no secret that buyers in this segment of cars demand visual appeal, so it is nice to see Audi heavily revising the exterior styling of the Q7. The front fascia has now been updated to accommodate the latest iteration of Audi’s signature hexagonal front grille, accompanied by redesigned LED headlights which can optionally include laser high beams. These new headlights play a ‘welcome dance’, when you walk towards after unlocking or away after locking the vehicle. A similar story can be seen out back where minor revisions have been made, that bring the Q7 more in line with contemporary Audi’s, these revisions most notably include the vertically oriented LED lights in taillight assembly and the chrome bar that runs across the entire width of the car. The exterior has also been “toughened” up with more pronounced wheel arch extensions, sharper body creases, an overall boxier profile and plastic body cladding; all of which add up to give the car a more masculine look. The finer design elements and details are still very much Audi; fans and buyers should have no trouble identifying the Q7 from rivals even if it was de-badged. Overall, Audi has done a good job; the new Q7 certainly has more visual appeal than the previous generation, which I think is important for a car that goes after this market.

The last generation of the Q7, was undoubtedly the king of the hill when it came to interior design, build quality, craftsmanship, material quality and sheer volume. It is good to see that Audi has even managed to improve on that. Like the exterior, the interior has been moderately revised with tech and design elements from more modern Audis. The MMI infotainment system that was operated with a clickable knob in the previous generation has now been replaced with dual touch screens, the shape of which mimics the exterior front grille. The lower touchscreen controls functions such as climate control and vehicle settings, while the upper screen handles audio, navigation, and other functions. It makes for a more streamlined dashboard design but it may come at the expense of being difficult to operate while driving (something that the knob design excelled at) as touchscreen controls are often fiddly. The two touchscreens do feature haptic feedback, which gives the impression of a button being pressed, but it is never quite the same as having actual physical buttons. Aside from this, things are comparable to the last generation, which is no bad thing. Material and build quality are top-notch, the design is suitably posh and the interior volume is absolutely gargantuan. You can easily fit 7 adults into this 3-row SUV, which cannot be said for many of its rivals. In summary, Audi largely took the “If it ain’t broke, don’t fix it.” approach with the interior of the new Q7 which, in my opinion, was the right approach to take. 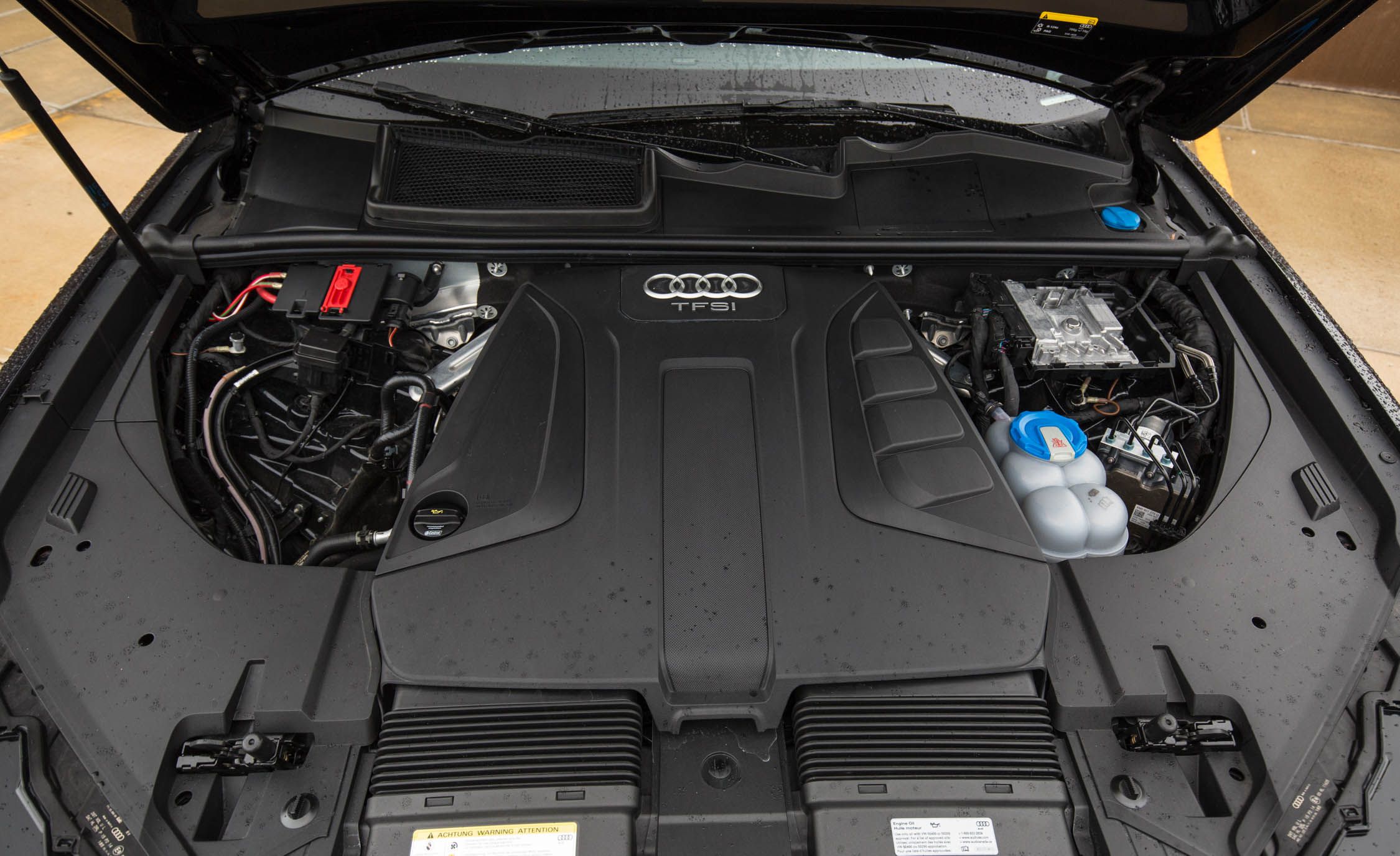 Driving dynamics have always been a strong point for the Audi Q7 and this generation should be no exception. The underlying chassis and platform are identical to the last generation Q7, however, there are a few significant tweaks that improve both comfort and handling. For starters, Audi’s height-adjustable adaptive air suspension now comes as standard on Q7s regardless of trim. The air suspension goes a long way in making the Q7 feel wafty, supple and luxurious, while simultaneously being agile and fun. Another upgrade in this area is the inclusion of adaptive anti-roll bar system (which was first seen in the Bentley Bentayga) that uses the car’s 48-volt electrical system to minimize body roll, lean and squat when you are pushing the vehicle to its limits. Powering the SUV is a plethora of engine choices, interestingly all of them are 3.0L V6 engines; the entry-level 45 TDI diesel, produces 228 HP and can get you from 0-100 km/h in 7.1 seconds, then comes the 50 TDI diesel, that produces 282 HP and shortens the 0-100 km/h time to 6.3 seconds, while the current king of the hill 55 TSI petrol develops 335 HP. Eco-warriors should also rejoice as all Q7s are mild hybrids, using their 48-volt electrical system and can recover energy while braking and coasting. A plug-in hybrid variant is also expected down the road, though details on it are not available as of today.

The Q7 is a top of the line Audi, so do not expect it to come cheap. While official pricing is not yet available for the latest generation, it should not cost significantly more than the outgoing generation, so a price tag of around 56 000 pounds in the UK market is expected. But that price tag does not include any of the desirable options, for which Audi will nickel and dime you in typical German luxury car fashion; so that sticker price is likely to swell to 80 000 pounds for a well equipped Q7. If you want one in Pakistan, then you will have up pony up for significant taxes and import duties, which, along with the devalued currency result in the price tag soaring to around 3 crores!

What do you think of the new Q7? Do think it has what it takes to stay atop the luxury SUV game? As always, constructive criticism and comments are greatly appreciated.