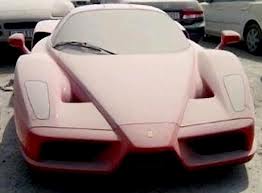 Its a bit under control now due to more stringent checks and harsher laws but in near past according to reports there were lot of abandoned luxury vehicles found at airports across the United Arab Emirates which are left behind by the leaving expats, the suggestion now is it may not entirely be the fault of expats escaping tough debt laws.

Reports have shown more then 3000 high-end sports cars parked at airports from running expats fleeing the country to avoid prison sentences for money owed.  Luxury sports cars such as legendary Ferrari Enzo worth more than £1 million, allegedly abandoned in Dubai by expats. These expats are believed to have defaulted on a loan for the super car and fled the country to escape possible imprisonment as under Sharia law which is observed across the Middle East, non-payment of debt is a criminal offence.

As the UAE has no bankruptcy laws, there is no protection for those slipping into debt.

It is however not just expats to be blamed for the irresponsible act of leaving expensive cars behind as they flee their debts, many locals are also involved in car abandoning. The aftermath of the global financial crisis affected people from all walks of life, not just foreign workers.

Its quite easy to took a bank loan in UAE and anybody working on average salary could get a handsome loan easily (lately banks are asked by Govt. to use strict measure to avoid defaulting on loans) People took out big loans to finance flashy cars to keep up with their peers but when things slowed down they have struggled to make repayments and have fallen into debt. Foreigners and locals have been caught out alike. Local however having the backing of their Govt. could negotiate it with the banks in their favour  expats on the other hand do not have such luxury.

A recent tranche of cars impounded by the Municipality of Abu Dhabi included a mix of foreign and Emirati owners. One very enticing pointer in UAE for the expat is the lifestyle in general is very high plus tax free and it is very mouth watering for the expats to get a very nice car very easily, European who could only dream of driving a Ferrari in their own country due to very high taxes freely roamed around in convertible ones exceeding the speed limits.

A chief drawback of the abandoned cars is that they take up much-needed spaces at airport car parks. On the plus side, many of these luxury cars are auctioned by the police at bargain prices.

Once a vehicle is suspected of being abandoned, local government inspectors will issue a warning notice. If the owner fails to respond within 15 days the car will be taken to a police scrapyard where it can still be reclaimed for a small fee. Most impounded vehicles however are never reclaimed, with hundreds of cars auctioned off each year.

While the global economic slowdown has dented growth within the Gulf states, the UAE is still one of the region’s strongest economies.