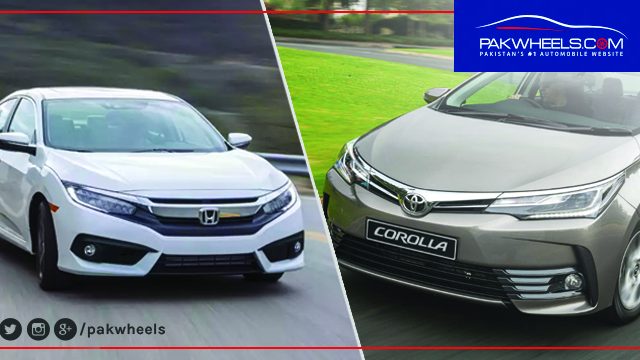 Government to withdraw 10% FED on 1700cc and up vehicles

Abdul Razak Dawood, Advisor to the Prime Minister on Commerce, Textile and Industries has announced that the government intends to withdraw 10% FED on vehicles of 1700cc engine displacement and up in the coming weeks.

Note that the government in the recent Finance Supplementary (Second Amendment) Bill 2019 had imposed a 10% federal excise duty (FED) on locally manufactured cars of 1700cc and above engine displacement with an aim to tax the rich.

Possible reasons behind this latest “U-turn”

There might be many reasons behind this latest decision, however, there are two main scenarios which come to my mind after analyzing the entire prevailing situation.

First is the poor sales statistics reported by the local automakers and second, hike in vehicles’ prices making the lives of potential buyers miserable.

According to a few quarterly reports published by the automakers, their profits are going down and they need assistance from the government.  The current government did give some relief to the automakers by allowing non-filers to purchase any kind of vehicle irrespective of its engine capacity. The order(s) of allowing non-filers is also a must-read, as the PTI government after coming to power allowed non-filers to buy cars, then restricted them, only to allow them again.

Read Also: https: Is 10% FED the Straw That Broke the Camel’s Back?

It is also reported in an online digital media portal that the government decided to withdraw 10% FED due to constant pressure from the local assemblers.

No one really knows why the local car makers increase the prices of their vehicles. They always quote rupee depreciation, which is also a fact, as the primary reason behind the price hike. There are many questions which come to mind, i.e., how much of the car is being produced locally and how much raw material is being imported which is effected by Dollar surge?

To give you an example, after imposition of FED, the price of Grande Altis 1.8 MT went from Rs.2,689,000 to Rs.2,957,900. Similarly, the price of Fortuner Diesel pre-FED was Rs.6, 829,000 which after FED imposition became Rs.7, 511,900. It is imperative to mention here that last year citing rupee devaluation the car manufacturers increased the prices multiple times. An industry expert while talking to a local media outlet said that it’s a problem that the rates of these cars are increasing every month and it should be stopped immediately.

He further asserted that the upcoming Alto 660cc’s base version might be priced at over PKR 9 lac– which will hurt the purchasing power of potential buyers. Moreover, he added once the government formulates and implements a policy it should let it work for some time and then decided to suspend it; if it doesn’t work. But that is not the case here; one-day government imposes a policy and then the next day it changes it, which is not only hurting the local auto industry but also the country’s economy.

This year, vehicle prices have been jacked up twice by the local assemblers/manufacturers. Right after Toyota, at the start of March 2019, increased its rates, both Honda and Suzuki jacked up their prices by up to PKR 85,000 and PKR 100,000, respectively.

From November 2018; till now, the car makers have increased the rates exponentially. 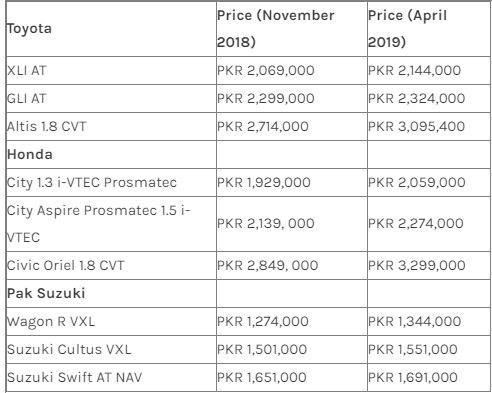 Not to forget that there are rumors of the US Dollar further strengthening against the Pakistani Rupee in the coming months, you can further expect the auto manufacturers and assemblers to increase the price of their vehicles. In November 2018 the Dollar rate in the country was around PKR 132, on the contrary, in April 2019, its rate is PKR 142.

Irrespective of the government’s duties and the US Dollar strengthening against the Pakistani rupee, whenever there is a price hike, it is ultimately the auto buyers which face the brunt of it all. Interestingly, when the government withdraws duties, auto manufacturers and assemblers do not always revise their rates. Let’s see what they do this time now that the government has decided to withdraw 10& FED. Fingers crossed.

Did Toyota IMC just introduce new colors for its Corolla?