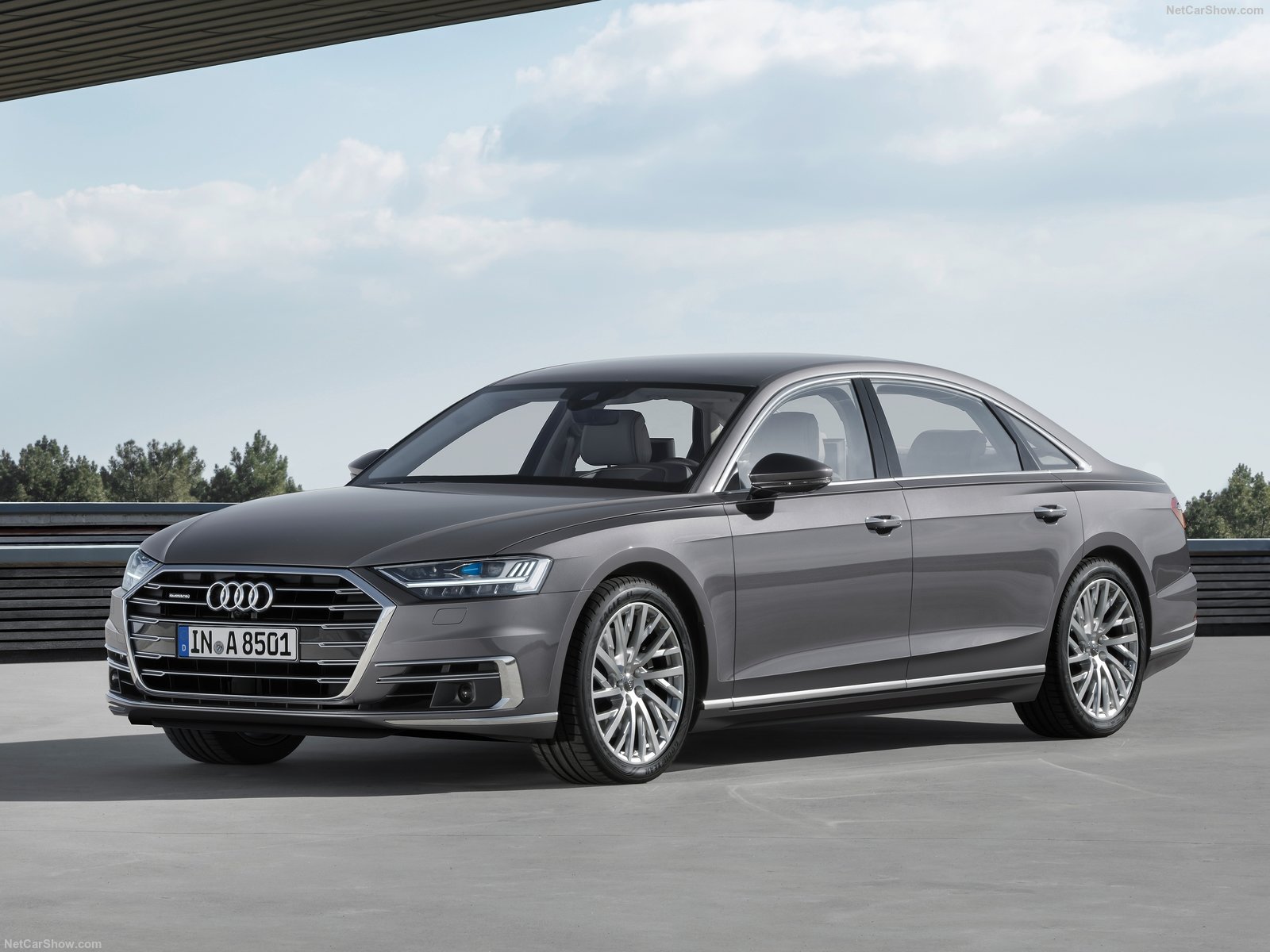 Mercedes Benz, BMW, and Audi have for the past few decades been long at war over who makes the best luxury sedan in the market. Mercedes Benz has the brand new updated W222 generation S-Class, while BMW has the brand new sixth generation BMW 7 Series, both have been in the market for a few months now, with each vehicle having its own set of unique features that pull clientele towards their particular brand.  Audi is determined to not get left behind in this segment and they have just introduced the brand new fourth generation 2018 Audi A8.

The new A8 features a brand new design language, ditching the slightly minimalist and business like design for a new more aggressive design language that seems to borrow heavily from not only Audi’s supercar the R8, but also takes some design cues from the multi million dollar Bugatti Chiron as well. According to the designers the new A8 was designed from the ground up, the new A8 is lower and wider than the one it replaces, and it is visibly more elegant. The designers began with a completely blank slate and designed the car from the ground up. The front end features a much larger and more aggressive hexagonal grille, with slimmer headlights that feature the familiar HD Matrix LED headlights that Audi incorporate into their vehicles. Overall the front end is much more sleeker and aerodynamic than before making the A8 look more like a large stealthy sports car than a comfortable cruiser. Around the back you have a more sleeker roof line that the designers at Audi say is much more akin to the roof line in a coupe, but it hasn’t really affected rear headroom at all if any. The rear end features taillights that stretch across the length of the car much like the rear taillights in a Bugatti Chiron. The taillights themselves are much slimmer and sleeker than before with design cues reminiscent of those found on the Lamborghini Huracan and the Audi R8. The rear bumper features twin riffled exhausts once again adding element to the new aggressive stance of the A8. The new A8 is 4mm narrower than the previous generation and, may look smaller and more compact than the outgoing model, but its actually 37mm longer, and 17 mm taller than before, making it a fairly large vehicle. 58 percent of the structure is made from aluminum, with the other 42 percent is made up of materials like steel, magnesium and carbon fiber reinforced polymer. 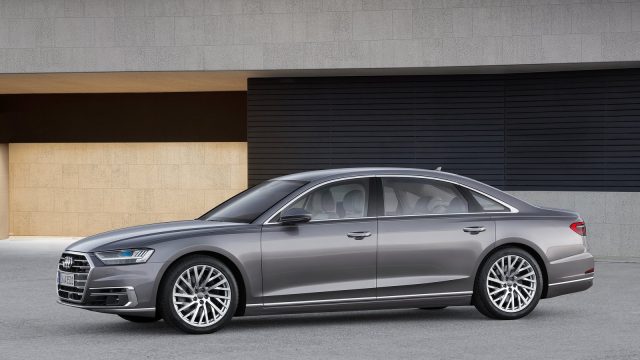 On launch Audi will offer a range of engines option, this range will include a 3.0-liter TDI with 286 hp,  3.0-liter TFSI V-6 with 340 hp, a 4.0-liter TDI with 435 hp, a 4.0-liter TFSI V-8 with 460 hp, and the range topper reserved exclusively for the long wheelbase version of the Audi A8 the A8L will be the 6.0-liter W-12 with 585 hp. But the engines won’t be the only source of propulsion in the new A8, all engine variants will come equipped with mild hybrid technology that will feature a 48 volt lithium ion battery located in the trunk that will not only help with acceleration but fuel economy and emissions as well, Audi claims this system will reduce fuel consumption by 0.7 liters per 62.1 miles in real driving conditions.

The new A8 is said to be the most technologically advanced Audi to date, the 2018 A8 offers level 3 autonomous driving that is ahead of both the Mercedes S-Class and the Tesla Model S. Audi is introducing a new technology called “traffic jam pilot” which will automatically active autonomous driving in slow moving traffic up to 37.3 mph on freeways and highways where a physical barrier is present to separate both carriageways. The best part of the entire system is that the system does not need to be constantly monitored as it does in an S-Class or a Model S, so you need not put your hands on the wheel, the A8’s traffic jam pilot will control everything from acceleration to braking. The A8 is also the first production car to use a laser scanner which in combination with radar sensors, a front camera and ultrasonic sensor can read and map its surroundings in real time, the A8 will use these sensors to detect any bumps or potholes in the road and adjust the suspension accordingly. This is in essence a more sophisticated and technologically advanced system than the one we saw in the Rolls Royce Wraith. The combination of this new suspension and autonomous technology coupled with standard all wheel drive and dynamic all-wheel steering, Audi promises “unshakable stability” with the new A8’s ride. The A8’s suspension is even clever enough to raise and lower the height of each wheel separately using electric actuators to ensure the smoothest possible ride, and it can raise the entire car if it detects that a collision is about to occur to ensure a greater chance of survival for the occupants inside. The A8 is claimed to be the first production automobile in the world to have been developed for highly automated driving. 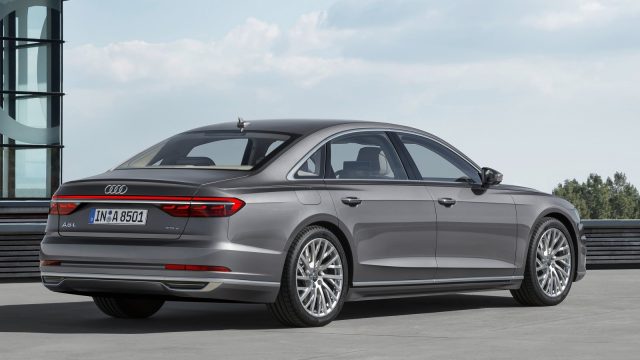 Stepping inside the fourth generation Audi A8 and you’ll realize that it is a massive step up from the previous generation A8, or infact any Audi currently in production today. The 2018 A8’s interior applies the same design language as the exterior with a more modern and aggressive but restrained designed language. The first thing that you’ll notice is almost all the buttons in the A8 have been replaced by a touch screen of some sort. The center piece at the front is a brand new 10.1 inch touch screen while there resides a smaller secondary screen below it. These screens allow you to control things such as suspension settings, climate control, engine management settings etc. Audi claims that the “classiest” feature in the new A8 is the optional “relaxation seat”. This seat features all the comforts that you would normally expected from a vehicle of this type heated and cooled seats, massage features and a vast array of buttons to adjust the seat just to your looking, but in addition to this it also features a special unit that can warm and massage the passengers feet as well. You have a small mini tablet in the rear by which you can control all the functions of the car from the rear and if you phone is paired with Bluetooth to the car you can also use this mini tablet to receive calls as well. The interior of the new A8 is an absolute techfest, featuring the latest and greatest gadgets and that coupled with the sublime comfort levels makes the A8 one of the most comfortable and relaxing sedans on the market.

Deliveries of the brand new A8 will start in the fall with prices for the standard A8 starting at nearly $104,000 while the A8L will set you back $108,000. We can also expect to see the new A8 in Pakistani Audi showrooms by early to mid-2018 as well. 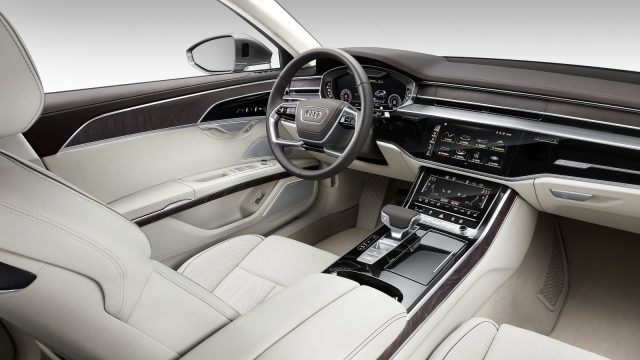 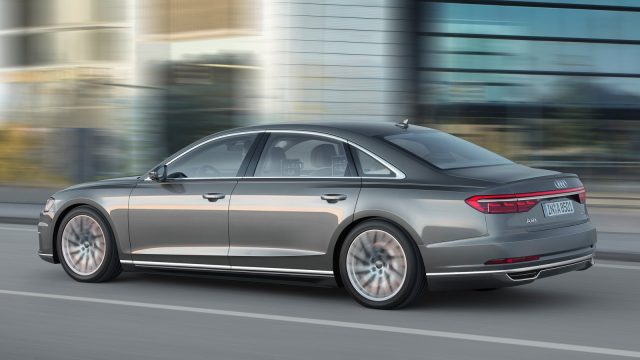 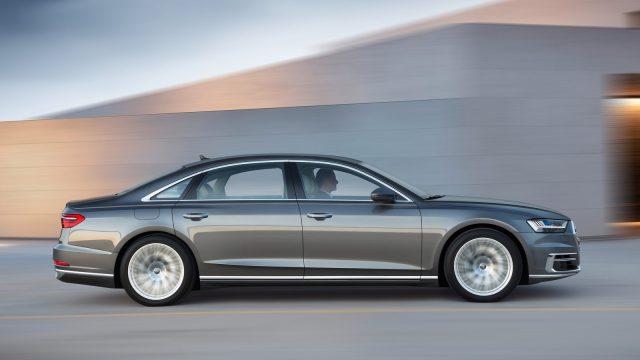 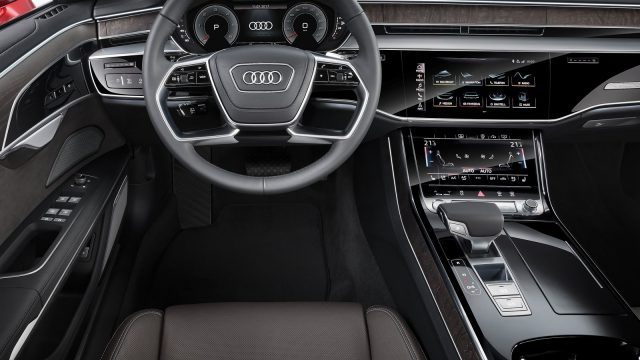 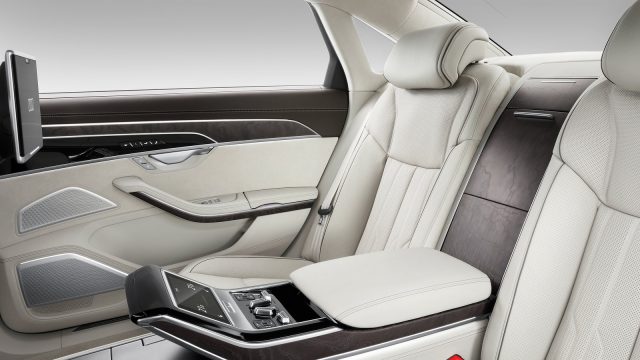 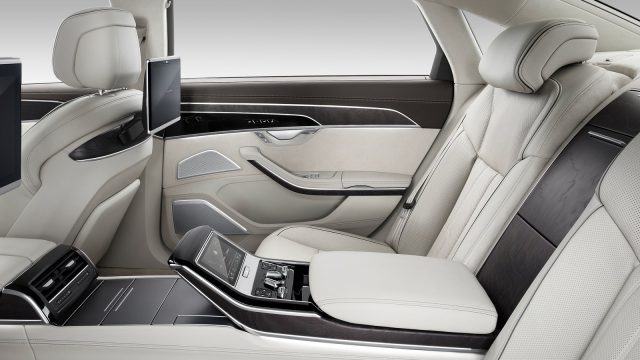 Why is the color of tire always black?