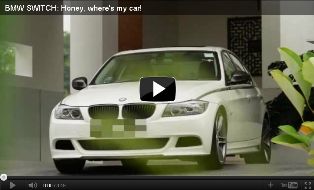 Singapore BMW has come with an interesting idea, they’ve merged two concepts to make one show; MTV’s pimp my ride with the famous television prank shows. However, the victim isn’t allowed to keep the car which has been replaced with his own but only take it for a spin.

The first episode was played on a woman, they switched the 1-Series and gave her the same car only fitted with BMW performance parts, and finally, the Singapore division has now released the second video in which they prank a 3-Series owner.

The video involves a young couple with real passion for the Bavarian propeller badge. The wife is the insider and the young man is our 3-Series owning target.

A regular 3-Series painted white is switched with one that’s still white but has been fitted with all the bells and whistles from the BMW Performance Accessories catalog, including an engine kit, a new sports exhaust, aerodynamic kit, rear carbon spoiler, carbon mirror caps, some BMW accents stripes down the side and a blackened grille.

After a number of uses of the usual bad word and the memorable “you’re turning into your mother”, the prank is revealed. As per usual, all the man gets for his troubles is the right to “take it for a spin”.