Amid the uncertain political and economic situation, Al-Haj Automotive has suspended bookings for all Proton vehicles, including Proton Saga and Proton X70. Earlier, the company was struggling in car delivery till the end of 2021. Recently, it started to meet the demand after starting proper local assembly operation, but it seems there is another hurdle for it.

In a circular, the company said that bookings have been stopped due to uncertain market conditions and fluctuations in US dollar vs. Pakistani rupee parity. The step has been taken with immediate effect. 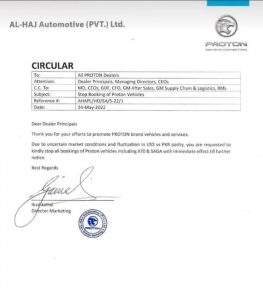 On May 18, Toyota Pakistan suspended the bookings once again due to the same reasons of “economic uncertainty and volatile market situation”. Pertinently, it was the second time in two months that company took this step. Along with the political uncertainty, the dollar was on a slippery slope as it went down from Rs. 182 to Rs. 202 during the last one month or so. And that means very high import bills for the car companies as they have to import major parts.

After the Toyota ban, it was expected that other companies would follow suit. And if the situation remains the same, more companies will close their bookings in the coming days. And this is not good for the local auto industry, which is already facing the aftershocks of COVID-19 in the shape of record-high freight costs and raw material prices.

We hope for a stable Pakistan so that the business can be normal again, so that buying and selling resume properly.

What do you think about the bookings suspension? Have you booked any Proton car? Share your thoughts in the comments section.