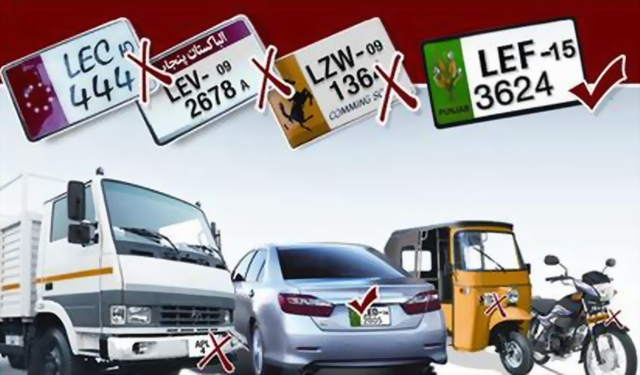 The City Traffic Police has launched a massive crackdown across Lahore against the vehicles with illegal number plates, tinted windows and vehicles without registration plates.

This news was officially released on 30th September, when a City Traffic Police (CTP) spokesperson admitted that 279,274 challans have been issued so far to vehicles in the city. The spokesperson further elaborated:

And now it seems that CTP has catapulted its crackdown in the city. Earlier this morning, long ques were easily noticeable on many roads across Lahore, as CTP wardens were busy stopping majority of the vehicles without computerized number plates and issuing them tickets. Tempers seemed to be flaring on both (Wardens and Vehicle Owners) sides, as public thinks that a subtler approach to this matter needs to be taken, while the CTP Wardens are opting for aggressive steps to ensure maximum results by issuing tickets to majority of the drivers on following criteria:

Sadly, I was also fined earlier today at Center Point, Lahore. And predictably, I had non-computerized plates on my vehicle, which were first ripped off and then snapped into pieces. While this campaign may come off as very aggressive to some people of Lahore, instead of starting a row with the warden, you should:

As I mentioned before, to some of us, the behavior of CTP wardens during this campaign might come forward as aggressive but in the end, they are pushing us to follow traffic rules, which many of us don’t, in normal circumstances. With alarming increase in the number of road accidents due to careless behavior and lack of knowledge of traffic rules, the CTP has certainly come alive. But my concern, like many Pakistanis is “How long will people continue to follow traffic rules after the end of this campaign?”. This question merits some serious pondering of the policy makers as opposed to their instant-result oriented strategy making.

The All New Land Rover Discovery 2017