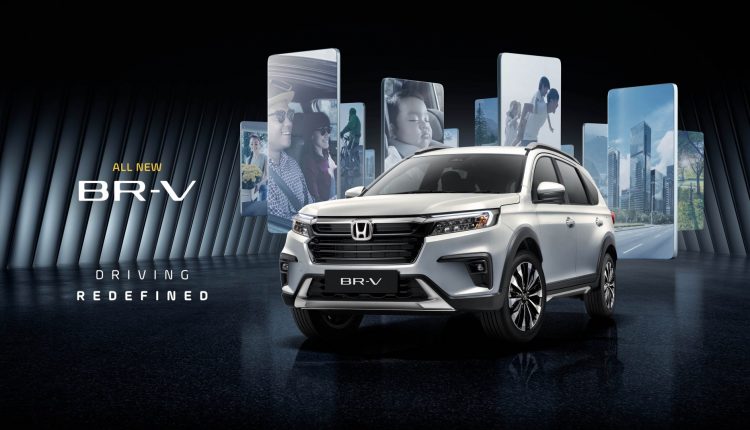 Sports Utility Vehicles/ Crossover Utility vehicles, whatever you name it, are high in demand nowadays. Every car brand has numerous offerings in this regard, and it gets populated every year. Back in 2015, when the CUV segment was just about to go crazy, Honda introduced “Bold Run-Around Vehicle “, the Honda BR-V. The first generation of BR-V, which is also offered in Pakistan, is based on the Honda Mobilio MPV/ Multi-purpose 3 row, 7 seater van.

Mobilio had a hard time on the sales chart, and the crossover segment was brewing so, Honda did some exterior and interior makeover of the Mobilo, gave it a look of a rugged SUV’s styling. The company introduced some suspension updates while keeping entire technical of Mobilio, and thus first-generation BR-V was born. The new styling, Crossover branding and marketing campaign helped it capture the market. The first generation was revealed in December 2015, and it went into sale in Indonesia, India, Thailand in early 2016. It got a mid-cycle facelift in early 2019.

In April 2017, Pakistani consumers also welcomed the BR-V, and since then, it’s for sale, although statistically, it’s not a huge success locally. BR-V sits under HR-V/ Vezel as far as the Honda global product portfolio, and it is an important model in the ASEAN market. According to Honda, more than 255,000 units of BR-V have been sold globally since the first generation.

Earlier this year, in May 2021, Honda Indonesia released a concept vehicle named Honda N7X. The concept was a design study about a 3-row vehicle. 7 in the name means 7 seat configuration while X is for excitement. Back then, Honda neither revealed any solid details nor hinted what N7X will be like, will it be a new product or a replacement of an existing one. But industry experts and later some trademark filing confirmed that a production version was expected to arrive sometime in 2021 and most probably as a next-generation BR-V. 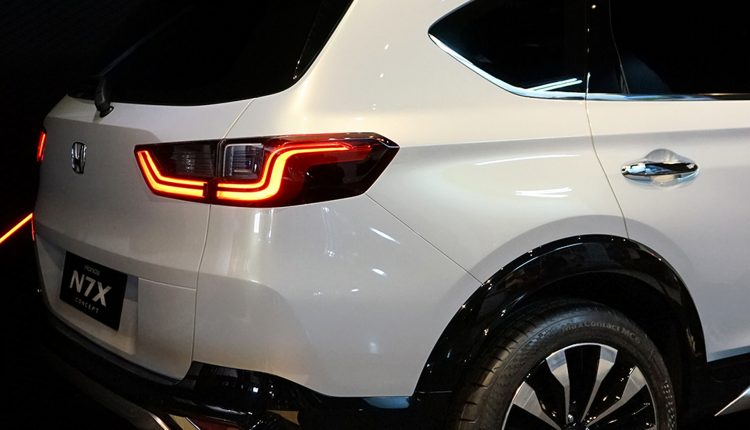 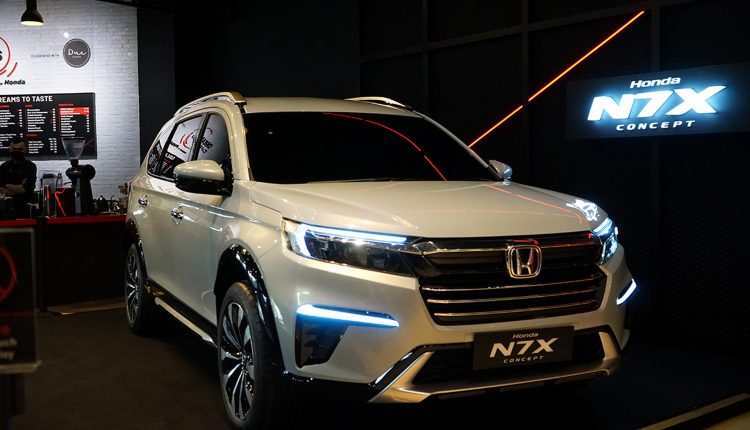 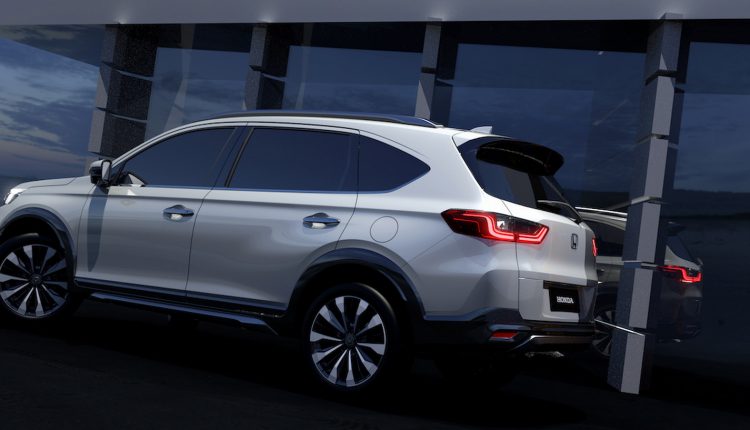 In September 21st, 2021 presentation, Honda Indonesia didn’t go in length as far as the technical details, the chassis architecture/platform on which the new model is based. Still, from earlier trademark filing, the new model carries a chassis code “DG3”, which is most probably an updated DG2 or, in other words, the same platform as the first generation with improvements.

Before the launch of the new BR-V, it was rumoured that the new model might ride on the Honda’s new and much more refined modular GN architecture, which is also the basis of the new 7th generation City, the new Vezel as well as the current Honda Fit/ Jazz. As of now, nothing is officially known in this regard. Honda Indonesia didn’t even release any details as far as the dimensions of the new BR-V, but from pictures, it looks like the 2nd generation might have gained some increase on the measuring tape.

At the launch of the concept N7X, Honda mentioned that , “it combines the premium comfort and spaciousness of an MPV with the toughness and style of an SUV ” .  The production version is not very different from the concept vehicle seen earlier this year although have some toned down appearance.  The new model is grown up and and more inline with the current generation of Honda models as far as design clues and influences.  Unlike the previous generation of BR-V, the newer model looks more crossover and less MPV on the outside.

Bold and modern front end,  new bonnet ,  wide front grill with horizontal chrome elements which drops down into the bumper with large Honda emblems gives an impression of a larger  vehicle . Newer bumper with slim LED headlights with integrated L shaped DRL gives a modern and sporty look.  Although the concept vehicle had a LED strip light on the bumper as fog lamps, the production models carried more of traditional round fog lamps at the traditional location on the bumper.  The lower middle portion of the bumper with air intake grill and skid plate gives the vehicle an aggressive look. 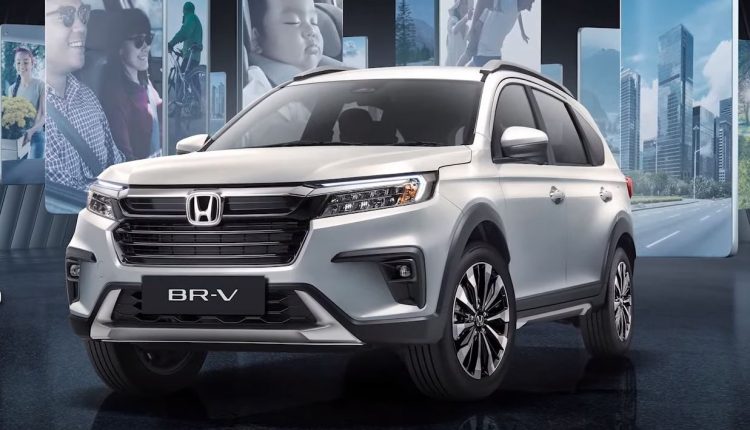 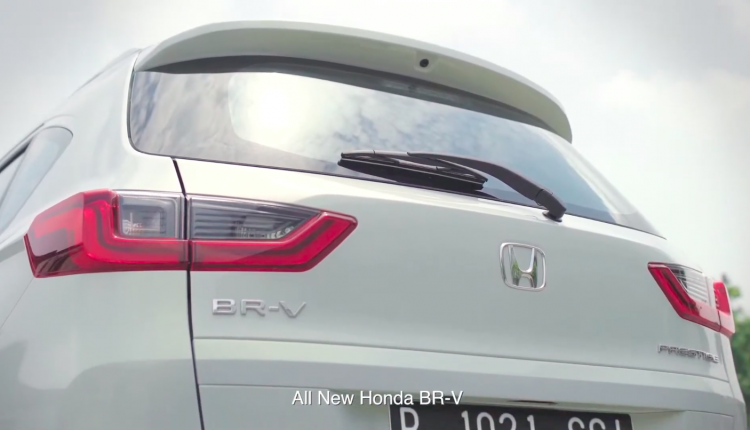 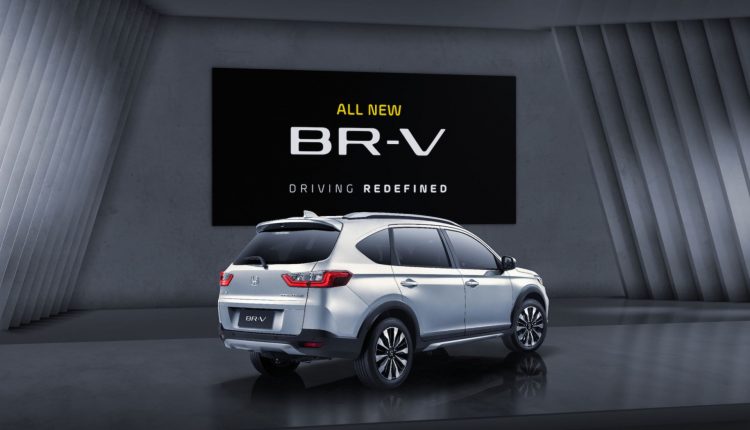 The side profile is all new compared to the last generation, which had multiple non-continuous character lines. The previous generation rear door also had a very non-conventional downward kink in the door glass frame. The new model has clean sheet metal, with a single simple imposing line that runs all the way from the front headlight and joins the rear taillights.

There is a newly designed C pillar with more streamlined glass panes, chrome lining and newly positioned side view mirrors for improved visibility. Like typical crossovers, you will find the roof rails on the side profile while plastic cladding around the wheel arches as well as the ABS plastic side skirts. Honda will offer 16″ or 17″ alloys depending upon the trim level. BR-V ground clearance is also increased to 220mm comparing the 201mm on the previous generation.

New cleaner design philosophy is also implemented on the rear end where you will find new wraparound LED taillights with an influence from the more recent 7th generation Honda City. On the previous generation BR-V, the taillights were right next to the rear glass panel; on the newer model, it’s located downwards while there is no reflector bar connecting the two lights as on the previous generation. There is a newly designed tailgate with integrated spoiler and obviously a high mount stop lamp, a new rear bumper with rectangular license plate area + blacked-out lower valance and horizontally placed rectangular slim rear reflector unlike vertical as seen on the previous generation. Shark Fin antenna, rear wiper are typical features. Overall the rear design is as attractive, cleaner, sportier and modern as the front.

No detailed specifications are not available at this time; we are not sure if the interior volume has an improvement over the previous generation. Honda didn’t share detailed pictures of the interior at launch. We can expect that there will be some positive news in this regard with a more spacious and comfortable interior.

Honda picked up the interior of the Honda Amaze sedan, did some minor updates and placed it in the 2nd generation BR-V. The new dashboard layout can be seen with central air vents placed high on the dashboard. Honda will offer 4 variants of the new BR-V in Indonesia. There is a new 7″ touch screen Double -din infotainment system standard with smartphone connectivity and a Multi-function steering wheel. There is a new automatic climate control unit with touch buttons and an LCD display. The climate control has a double blower for more volumetric rear HVAC venting. 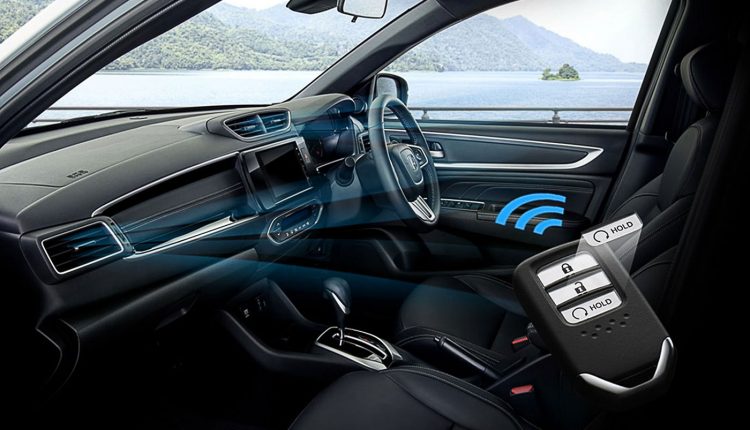 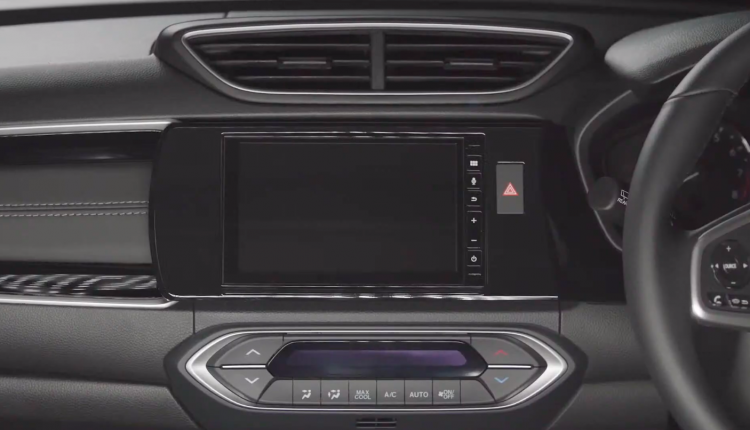 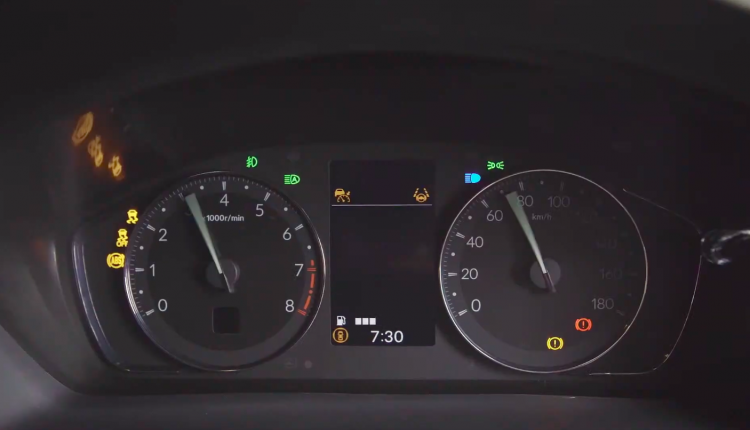 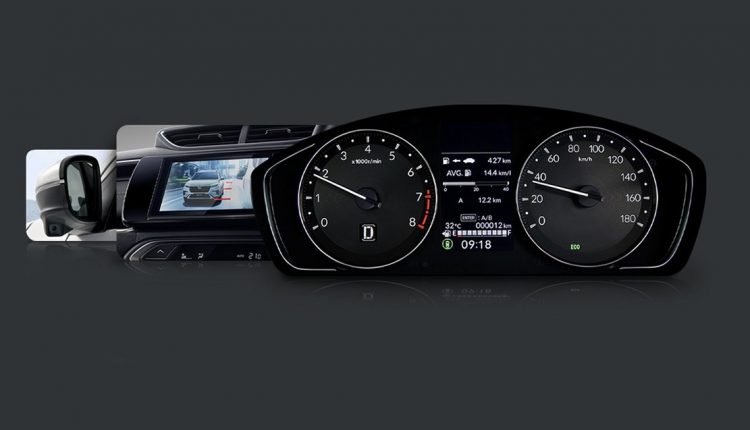 BR-V will get a new instrumental cluster with a more conventional analogue two gauge setup; for speed and RPM, unlike the 3 circles seen on the previous generation. In between the two gauges, there will be a 4.2″ TFT MID display, which will reflect various typical information like average fuel consumption, mileage, remaining fuel, trim meter and more.

BR-V first row will be available with the central console/armrest, while second-row passengers will also get the central armrest. Multiple USB ports for charging are provided in the vehicle, even in the third row. As per Honda, extensive storage space has been provided across the vehicle.

Meanwhile, the third-row seat can also be folded down. Honda will offer convenience features like auto-folding side-view mirror with LED turn signals, Smart entry with Push-button start, remote engine start, walk away auto door lock which locks the door automatically when the driver leaves the vehicle with key Fob and around 6 feet away, vanity mirrors, maps lights are also available.

Similar stuff can be seen here, and nothing much different from the previous generation. The BR-V uses the same well known 1.5L DOHC i-VTEC engine with some minor updates. The engine produces 119HP @6600 and top torque figures of 145NM @4300. These are almost similar numbers as the previous generation of BR-V.

The standard base transmission is the 6-speed manual, although a new CVT transmission is also available. As per Honda, the new CVT has improved fuel efficiency, performance overall better emission and now comply with Euro 4 standards. 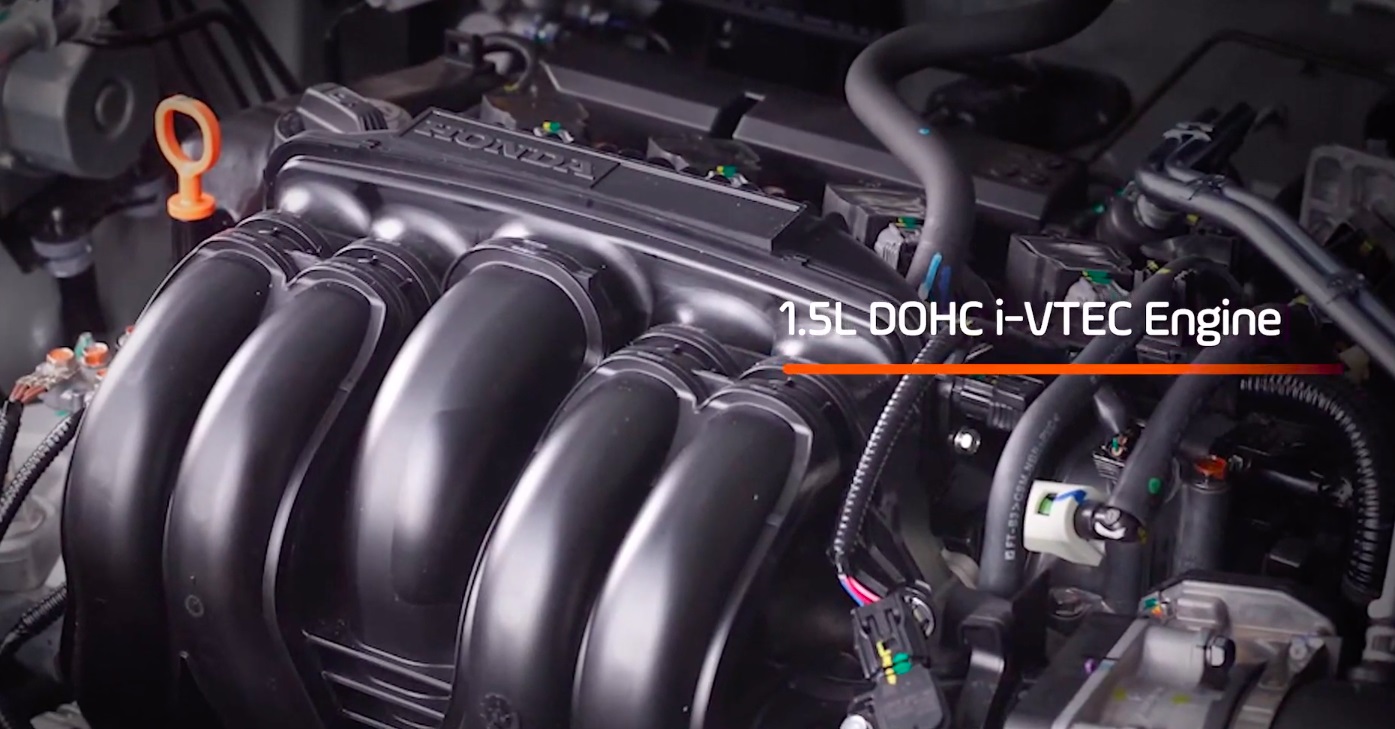 BR-V will use the Electric power steering, no details on suspension setup, but we can expect MacPherson Strut on the front while Torsion Beam on the rear. ABS brakes with Discs on the front while possibly drums [ no confirmation] on the rear wheels. AWD, usually a feature on certain crossover vehicles, is not an option for BR-V.

While there might be conflicting views and opinions about the exterior or interior of the new BR-V, the new model shines on the safety front. Like all Honda products, the BR-V utilizes Hondas ACE/ Advanced Compatibility Engineering Body Structure to use high-strength steel at strategic locations, including side-impact indoor beams while optimizing the crash zones. The BR-V now comes standard with front and side curtain airbags. HSA/Hill Start Assist, VSA/Vehicle Stability Assist, ABS+EBD also comes standard. Seat belts are equipped with pre-tensioners, and ISOFIX points are available for child seats. Backup camera and parking sensors are also available as standard. 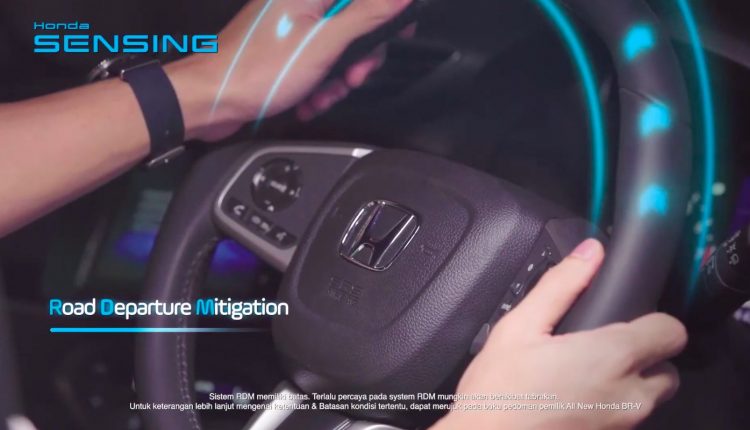 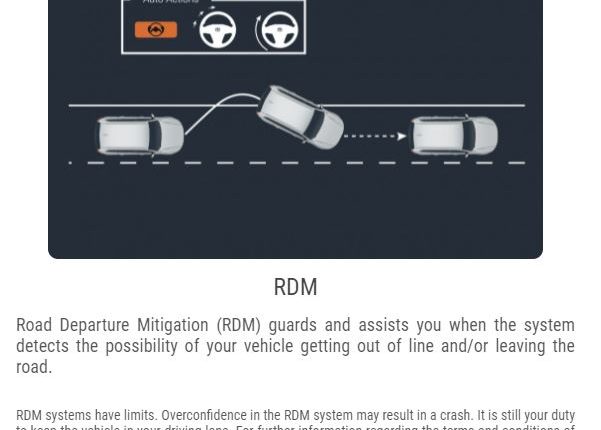 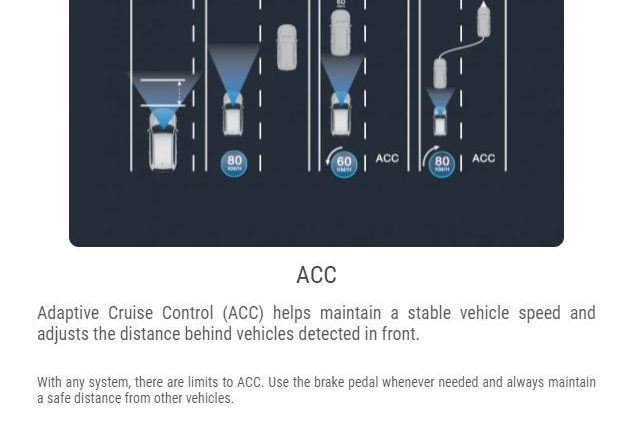 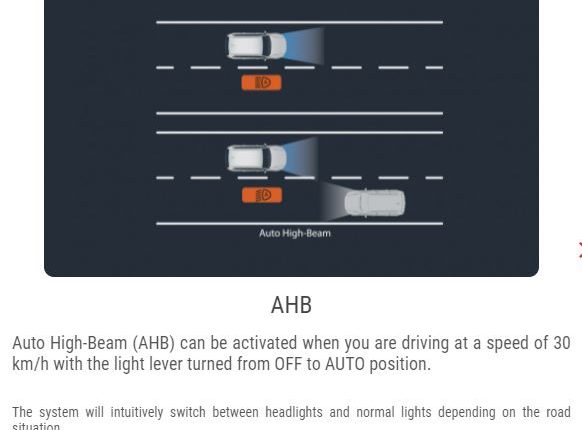 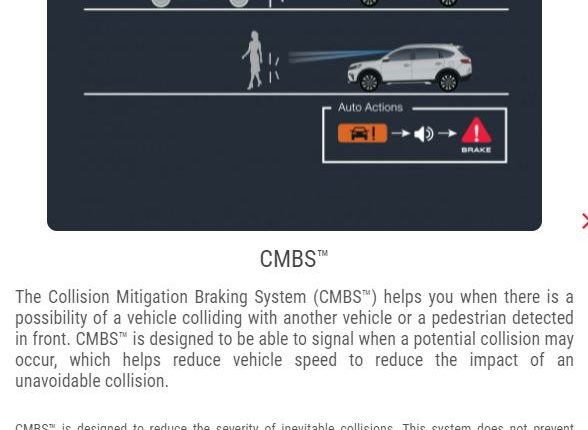 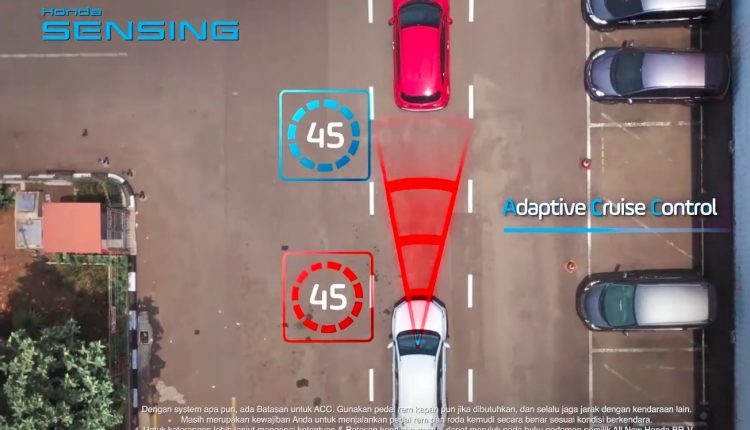 Honda BR-V is now also available with Honda sensing active safety features, which use a camera system. This system includes Lead Car Departure Notification System, which informs the driver when the vehicle stops or moves in front.

Collision Mitigation Brake System signals and warns the driver in case of a frontal collision and applies emergency braking. Adaptive cruise control, lane-keeping assist, lane centring assist, lane departure mitigation & auto high beam are the additional safety features. Honda lane watch, which uses a camera mounted on the passenger side-view mirror, is also available and displays the side view on the infotainment screen while changing lanes or taking the left turns. Keep in mind the Honda sensing is available ONLY on top of the line trim level.

Honda Indonesia has rereleased the model for the domestic market, and it will go on sale in early 2022. No details on pricing, but Honda expects that the new model will certainly sell more than the previous generation. As always, the next question is when we will see the new model in Pakistan. The Pakistani BR-V just completed 4.5 years, and we can easily assume that the next model is probably a year away, at least at this point that too. If the new BR-V is using the same older platform, which is most likely the case.

If the 2nd generation BR-V is using the GN platform, which is also the foundation of the 7th generation Honda City, we can forget about the new BR-V at this time in Pakistan. The reason being Honda Atlas never invested in the implementation of this platform, and that’s the main point we have an older and recently released 6th generation City. Once we have a clearer picture and in-depth details about the new BR-V chassis, we will be able to predict the future of BR-V in Pakistan. Till then, Stay Tuned!