As both cars have created a serious hype in the local market, here is the comparison of these vehicles for our readers. It is pertinent to mention that this comparison is between Top of the Line variants of these two cars.

KIA Stonic will come with a 1.4L MPI engine which generates 100hp and 130Nm torque, while French crossover has a 1.2L MPI Turbo engine, producing 130hp and 230Nm torque. So, the latter has a clear advantage over the former.

If we talk about the Transmissions, both vehicles will have 6-Speed Automatic ones.

Both cars have LED Headlights, and DRLs, while Stonic will come with 16-inch Alloy Wheels against 17-inch Alloys in Peugeot.

The size of the Floating Infotainment Touchscreen in Stonic is 8-inch and 7-inch in the French crossover. Furthermore, both cars will come with a Sunroof, Push Start and Cruise Control, enhancing the appeal and comfort of these cars.

Both cars have Front + Rear Parking Sensors, Rear View Camera, Hill Start Assist and ABS. However, Stonic has Vehicle Stability Management (VSM) as an additional safety feature. Lastly, Stonic will come with 2 Airbags, against 6 in Peugeot.

The addition of these vehicles is undoubtedly excited for petrol heads. Are you among the excited ones? Share your thoughts about these vehicles with us in the comments section. 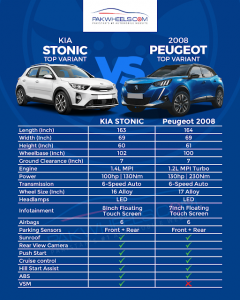