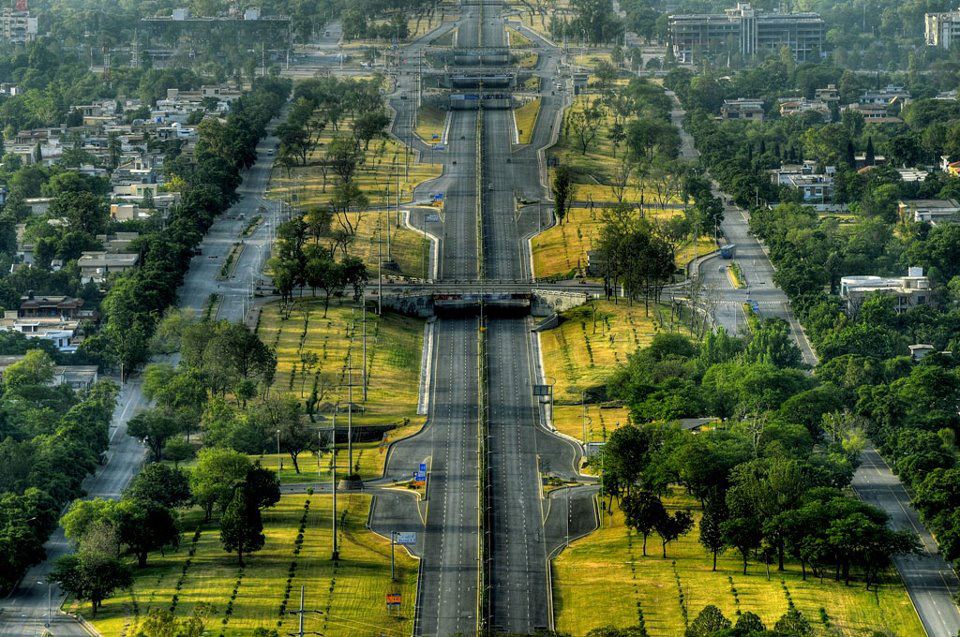 There was a time when even the name of Islamabad, the magnificent capital of our country, would bring to our minds vivid images of greenery all around while cruising on very quiet and serene roads. Driving around Islamabad used to be a pleasure and if there was even one point in the city that started facing any congestion, the residents simply took some other route out of many to avoid it. Life was simple, and why wouldn’t it be; since it was initiated as a very well planned city.

But then, “development” happened. Not the planned type but in fact the very opposite. Projects which were deemed essential to cater to the eve 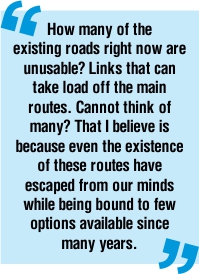 r increasing needs of the capital city’s traffic sprung up, although all that the citizens have received is more hindrances and there does not seem to be any relief in sight from this ad-hoc development taken up without any planning of minimizing disruptions. And what is more bewildering is the absolute lack of focus on the minor repairs which would eliminate the traffic problems while being obsessed with trophy projects.

We raised the issue of expected problems from opening too many projects at the same time last month in the post ‘Designing Chaos: Pindi-Islamabad Expected To Face Worst Traffic Woes Due To Development Projects‘, and the predicted difficulties have already started to surface.

The main artery of the city is now a major choking point i.e., Islamabad highway from Zero Point to Faizabad while taking detours is not yet possible for many due to unfinished projects around it or affecting the alternate routes. But what we also promised in the previous post was that we would present some proposals which we believe are the best solutions in the current scenario, and that is what this write-up is about.

My first suggestion is that Islamabad neither needs any new roads, nor any more expansion in the existing infrastructure. But hold on, before all the congestion points, long jams and the mess around makes you stop reading my suggestions, with you start doubting the validity of this suggestion, just ask yourself this simple question: How many of the existing roads right now are unusable? Links that can take load off the main routes. Cannot think of many? That I believe is because even the existence of these routes have escaped from our minds while being bound to few options available since many years.

So let us refresh that memory, and starting from some of the very obvious suggestions to eliminate the traffic woes in the capital city, let us explore what can be done in this area with the least funds utilized. 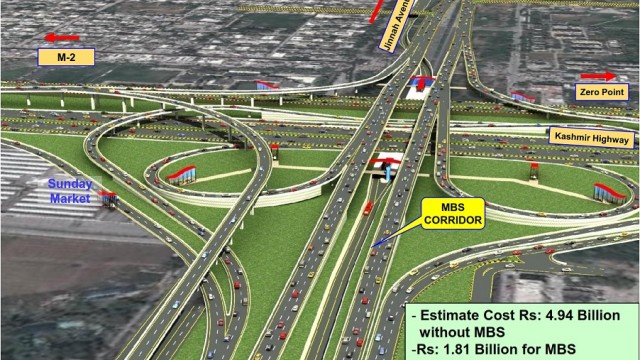 This bottleneck is at the junction of major routes and the chaos it has created just cannot be over emphasized, the recently expanded Kashmir highway that is wider than the motorway, provides the fastest access across Islamabad, and 9th avenue, which was the fastest route for traffic shuttling between the twin cities without any disruption, both have been severed at this point. As per media reports, there has been some disagreement between NLC and Nespak over the design of the interchange which has impacted the timeline, let’s hope that some focus of the administrations returns to the importance of this route so that the traffic flow disrupted throughout the city gets some relief.

Early completion of this interchange would benefit the city traffic the most, taking all the diverted traffic off the smaller connecting paths and freeing them up. 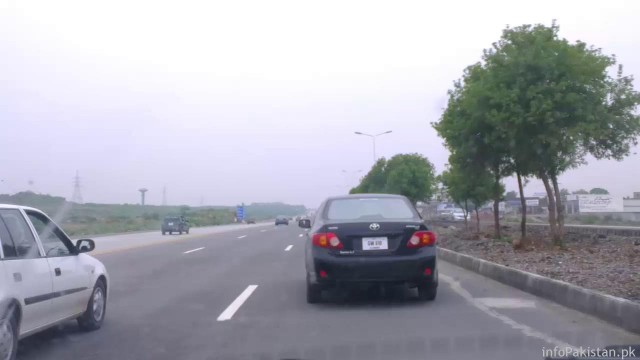 Although the administration has already begun the expressway project by starting from the section which would create the most amount of mess possible i.e., zero point to Faizabad, and if it still picks the Koral-Rawat section as the next phase instead of the Koral-Faizabad section as declared in the media reports, the upcoming chaos can be avoided to a great extent in the shorter run and would provide an excellent route to a very large segment of citizens on that section when it’s completed earlier. At present, due to the unusable condition of one lane on both sides destroyed by overloaded trucks, it has been reduced to a single lane carriageway while it is a major route for light and heavy traffic entering and exiting the city and many housing societies connected through it. 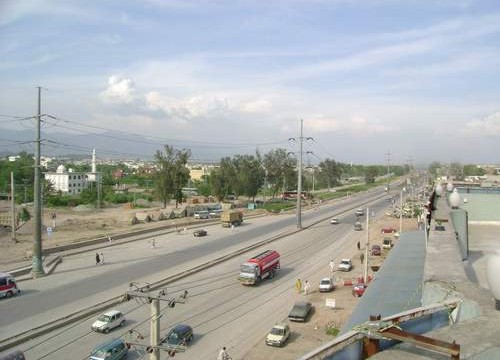 The next major route is the IJP Road, which is currently in such a bad shape that one has to risk major damages to the vehicle. Apart from the dilapidated condition of the road, it also suffers from bad traffic discipline and rules are not properly enforced specially on the public transport vehicles and trucks which cause major disruptions.

If these two factors are taken care of, much of the traffic entering the city unnecessarily and traveling through the connecting roads would consider it and situation would considerably improve on them while also reducing the travel time for many. The viability of this major route dissecting the twin cities will take of the load from even the major arteries i.e. Islamabad expressway, Kashmir highway and airport road since at the moment anyone who has to reach the GT road or motorway has to take the other safer options. 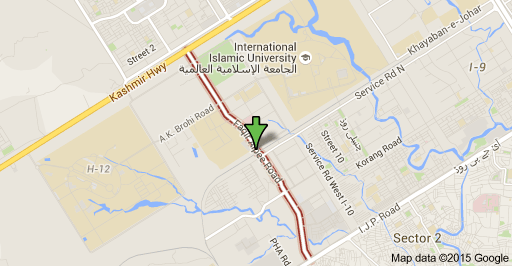 This road connects Kashmir highway to IJP Road and is continually been avoided from the radar of authorities since decades. This route provides such a better alternative to many who, simply because of its absolutely pathetic condition, are forced to either enter through Golra Moar or take even longer and already congested routes. Repairing this artery would not only improve the traffic problems at other roads by sharing the load but also help many commuters by providing a shorter and quicker access. Since the slums along this route have also been recently cleared by CDA, hopefully this important road will also be focused upon soon.

Falls between sectors H and I, and connects 9th avenue to Faqir Aipee Road, despite being a very important connecting road, it has been in tatters since ages. The commuters are aware of it being a shorter route but they still avoid it due to the poor road condition. This can take so much traffic off the adjoining main roads and provide a better alternative. Even though many major universities, dry port, railway station, offices and commercial areas are connected by this route, its condition forces the commuters to take the longer alternatives adding to the traffic on them unnecessarily and increasing their commute time as well.

Moves between sectors G11/F11 and Mira Abadi, it is in an absolutely pathetic condition, repairing it would take a huge burden off the G10 and G9 entrance / exit and the checkpoints at them. It would also link Kashmir highway to Margalla Road eliminating the need for many to travel between sectors G and F while taking infinite turns just to get to the other end, not to forget that most of them are blocked by ITP since they get clogged due to the amount of traffic forced to enter in these small roads. 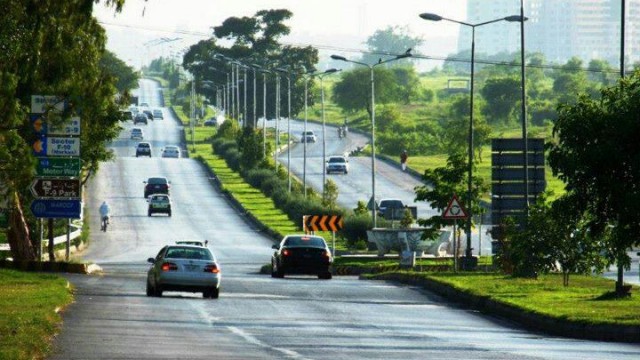 The benefits to do repairs on this, especially at the glora end, and remove the checkpoints and blocked turns can make this road able to service a lot of traffic which doesn’t come here. Since the entrances to the headquarters of armed forces lie on this road, very strict check is maintained by the authorities to keep it clear. It is also a perfect example of how a road that isn’t much wide can still cater to so much traffic if regulated properly.

On the other end of Islamabad, things are better since the roads have not been neglected owning primarily to their use by the more affluent segment of the society. Any congestion arising is duly taken care of through counter measures by the efficient ITP personnel and the administration. The only step that is required to ease the flow of traffic is opening up the roads which are blocked under the claim of security measures and removal the checkpoints erected at many points hindering the flow of traffic.

So, do you still believe that the phenomenon of traffic congestion as seen on major roads of the capital is because of limitations in infrastructure? Or simply a case of delayed projects and neglected condition of existing roads? Just see the extent of options highlighted in green which are available but only require some attention from authorities. 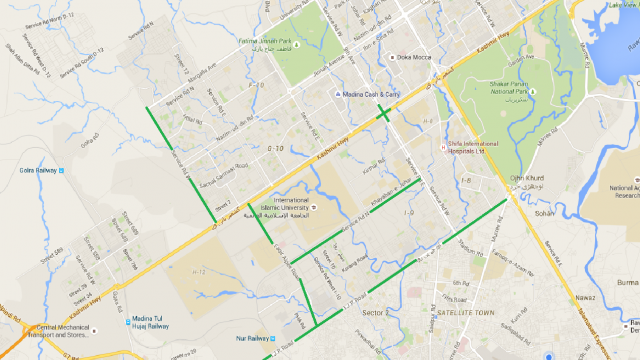 Interestingly, as per media reports, the repair of existing roads is being taken up by the administration but as usual in a pretty awkward sequence, starting from sectors F and G. Yes those are “really” critically important roads in the capital requiring the most immediate attention right?

Sectors H and I would be taken up later while the repair of IJP is being pushed in the backburner. We are as clueless as you would be about the priority assigned to these projects but we do not have any say in the matter so please keep your focus on finding more alternate routes to the current alternate ones.

If you have any suggestions that can improve the traffic situation in the capital city, let us know. While we finalize our proposals for an even greater challenge i.e., eliminating the traffic congestion in the sister city Rawalpindi, without building any new roads or even any expansion. Impossible? We don’t think so.

Government May Cut Fuel Prices By Rs 7 Per Liter