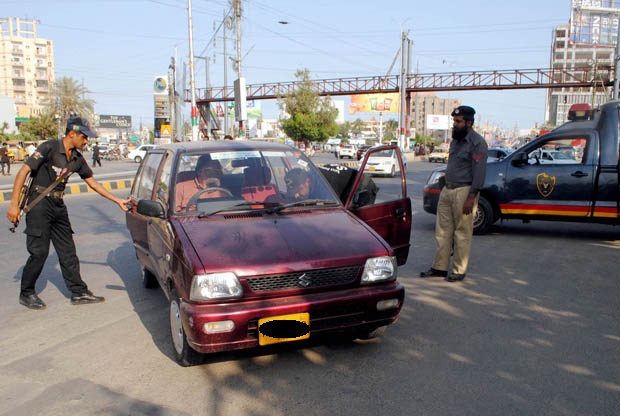 Harassment of motorists at the hands of Sindh Police

If you happen to live or travel to Karachi often like me then there is a high chance that you will encounter Sindh Police somewhere down the road, and that experience will last a lifetime.

Speaking in a general sense, the entire policing system of Pakistan is no praise worthy, but it is very hard to beat corruption benchmarks set by the Sindh Police. The motorists are frequently harassed by Sindh Policemen, who have a lot of heinous tactics up their sleeves.

A couple of years back I had the experience of meeting a few Sindh policemen while driving; I thought it happened just with me, but hearing others share their experiences later reassured me that I was not the only one and it is very common and rampant there.

During my first visit to Karachi I was stopped at a Police Check Point (Naaka). One policeman came to me and asked for my ID card. After I handed it over to him, he was like “What is your purpose here?”, “Where do you want to go?” etc. and asked me to step out of the vehicle so that he can thoroughly check my vehicle and me.

He found a gift wrapped box inside my car and was hell bent on proving that it contained a gun or a bomb big enough to vaporize half of Karachi. He was insisting that I open up the gift wrapped package and show him. It wasn’t until I called up one of my friend whose father works in the government that they let me go.

This isn’t just my story. I have many friends who have experienced more or less the same thing. A group of my friends were travelling from Islamabad to Karachi in August 2010 and they were not stopped a single time during their journey in Punjab but as they crossed Sadiqabad they were stopped at Sindh-Punjab border by Sindh Police who asked them to have their line cleared (Saeen line clear kerwalu poray Sindh ki), which means that my friends give the policemen good enough Chai-Paani (bribe) and no policeman would stop them at any Naaka as after getting the bribe, the policemen at the border would call on wireless and give the vehicle number to all other Nakas for clearance. Just imagine if smugglers and terrorists do the same and roam freely.

The real intentions of these policemen are to mint our hard-earned money; nothing else. They will ask to see your Driving license, I.D card, car registration paper, etc. only as a scare tactic. We live in one of the very few countries where the sight of police instills fear in us rather than confidence. The policemen know this too and use it against us for their monetary advantage.

I understand that we are facing a very dire security situation across the country, but it does not mean that they harass everyone like that. Even the Punjab Police is better than the Sindh Police as they do not employ these cheap tactics.

Authorities are requested to check and stop the policemen from doing harassing the citizens like that. Some sort of Standard Operating Procedure (SOP) should be formulated that ensures uniform treatment of every citizen. Complaint Cells should also be made accessible for everyone as you cannot lodge a complaint against a police officer in your local Police Station without being harassed. Even the Nakas and other checking areas should be monitored via a CCTV camera so that the policemen do not have the guts to try and get money from motorists. If not, they will continue to harass and collect “taxes” from motorists using the hundreds of “toll booths” setup by them across the country.

Distracted Driving – One Text or Call Could Wreck It All