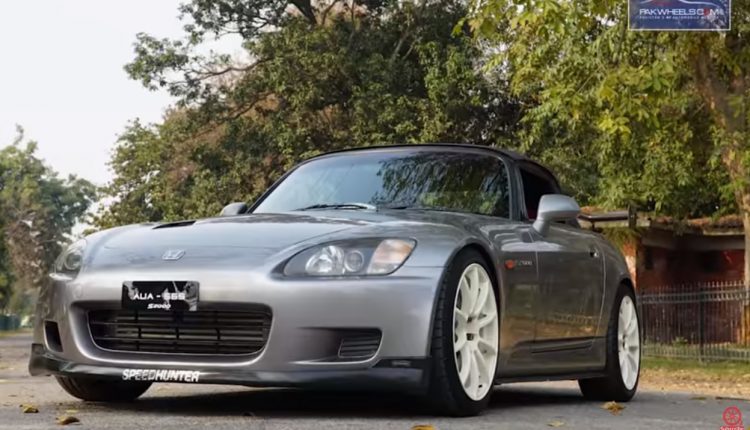 This review is based on a very exciting car from the Honda family: the S2000 AP1. This is the 1999 model of the S2000. This model was launched in both Japan and the United States. This S2000 is a turbocharged model, and it has many custom modifications.

The owner previously had Honda Civic EK K20 Swapped hatchback. That was a front-wheel-drive car. The owner has some traction issues with the rear-wheel-drive S2000, as this is his first experience. This car is a convertible soft top, and a hardtop can also be installed to insulate road and engine noises. There are a total of 3 to 4 S2000s in Pakistan at the moment.

The owner ahs installed after-market white rims that go well with the exterior paint of the car. One exterior quirk of this car is that an exhaust pipe is sticking out of the hood, which is a part of the anti-lag system and the turbo kit. The taillights are LED and are after-market. There is a huge black wing/spoiler at the rear that produces downforce to increase the stability of this car at high speeds.

The carbon-fiber spoiler is from APR Performance. The trunk brake lamp is in stock form from the factory. At the rear, there is a carbon-fiber diffuser. Moreover, the front lip and side skirts are also carbon fiber. The owner has also installed D2 coil-overs that help in lowering the car to the ground. These are two-way coil-overs. The car is generally lower to the ground to increase stability and handling in corners.

The owner has also installed a number of gauges in the interior to keep checking essential readings of the car. These gauges tell water temperature, oil temperature, oil pressure, and turbo boost. The trunk capacity is very limited; however, you can fit a large bag or some grocery items in it. Since it is an old car, the interior is a bit dated and simple.

There is lots of black plastic used on the dashboard while the seats, floor mats, center console, and some parts of the doors are red. The S2000 has a manual climate control with buttons located on the left side of the driver. The gear knob is made out of aluminum and is round in shape. The center console has buttons for the roof, hand brake, and an ashtray.

The flat-bottom steering is from VGS and has a silver trim at the bottom and at the top of the steering. The seats and the armrests in the doors are in red leather material. Behind the driver seat, there is a small compartment and a 12V charging socket. The windows are powered in this car, and only the driver-side window came with an auto function.

The push-start feature is also included with this car. Audio controls are given on the right side of the driver adjacent to the red push-start button. The paddles are anti-slip and are made out of aluminum. The instrument cluster for the driver is fully-digital, and it shows the information on fuel, temperature, airbag light, rpm, and speed.

There is a 2.2L DOHC VTEC engine that can rev up to 9000rpm that can produce 235bhp. The engine is paired with a 6-speed manual transmission. This is a rear-wheel-drive car that has a Limited Slip Differential (LSD). The LSD makes sure that the power emanating from the rear-wheel-drive system can be grounded, and there is a limited wheel spin when launching this car.

The turbo kit attached to this car is from Sheepy Built and an AEM V2 standalone EMS that boosts the car’s performance. In order to increase performance and horsepower, the owner has also installed a water-methanol kit with the engine. Other modifications under the hood include spring retainers, 6-puck clutch, and a changed final drive.

The brakes of this car are in stock form; however, the owner has installed dual exhausts from GReddy. There are two-piston caliper brakes in this car to enhance the effectiveness of brakes. There is also a boost controller in this car, and it is tuned at 1.2 bar. The engine included in this car is based on an aluminum block and had forged pistons.

This was new back in the day, and this helped S2000 earn acclaim as well. This is because this engine block can produce much more power with certain modifications. In order to convert this naturally-aspirated engine car to a turbo one, the owner installed an intercooler and a turbo kit. The owner runs this S2000 on Hi-Octane only, and the engine oil is also imported. The fuel tank capacity of this car is 45 liters.

The aerodynamic styling of the front bumper and the side skirts helps in the efficient flow of air. This results in increased stability and better handling of the car. The suspension has some modifications to improve handling. These include strut bars at the rear that prevent the chassis flexing during cornering. A 50:50 weight distribution also helps in stability and handling. The headroom is a bit tight for tall adults, and the owner faces the same problem.

In order to enhance the safety of this car, Honda included an X-bone chassis. This chassis is known for its rigidity and collision safety. This chassis was also made in one piece that ensured its strength. Other safety features include Anti-Lock Braking System (ABS), dual airbags, and an immobilizer.  Features like ABS were not included in the cars of this era, and it was a valuable safety feature that Honda included in this car.

One of the difficulties you have to face while owning this car is the expensive spare parts that have to be imported from abroad. The resale market is also very niche as there are a few of these cars available in Pakistan. Overall, it is an amazing car as far as performance and thrill are concerned. The S2000 is one of the highly-acclaimed cars in the motoring world. It was easier for the owner to convert this car to a turbo one using an imported turbo kit. However, you have to take good care of a car of this kind.

Stay tuned on PakWheels blog for more interesting content like this one and drop your thoughts in the comments section below.

Recommended for you: 10 Best Used Cars Under 5 Lacs In Pakistan

Dollar Coming Down, Will Car Prices in Pakistan Reduce?