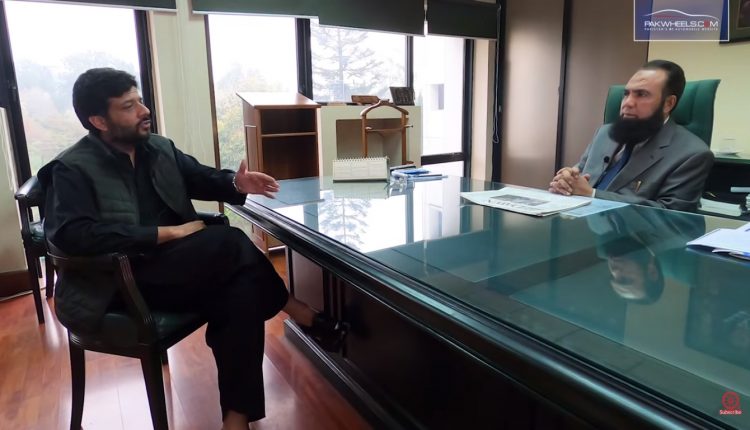 This is an informative post on buying Non-Custom Paid (NCP) cars in Pakistan. People have many questions regarding this topic, and they asked us over time regarding NCP vehicles and their viability in the country.

We have tried to cover all of your quandaries in the following interview conducted with the Director-General of Intelligence and Investigation Customs, Muhammad Zahid Khokhar.

For people in Pakistan, the NCP is a rather attractive word, and people do consider going for these cars. Therefore, it was imperative to conduct this interview to guide you on this matter.

Suneel Sarfaraz Munj: Is there a process or operation provided by the customs department to verify the papers of an imported car and that the duty is paid in full?

Muhammad Zahid: In every custom-house, especially from where the imported vehicle has gotten clearance, there is an AC car section. This section can verify the imported car for you. However, there is a need for a formal system in this regard. Under this, there will be a facilitation desk in every custom house. If this happens, people will not have to go to Karachi, and they can get a verification certificate from their nearest custom house. This certificate will bear the name of the officer verifying the vehicle and the date of verification. This system is feasible to get launched in the future.

SSM: If a person is driving an NCP vehicle, what repercussions that person may have to face under the law?

At times, the registration is fake, but the custom on that vehicle is paid. Then we check the chassis number of the vehicle. Customs personnel has laptops, and the data is online. They can easily check it on the spot. If the data is there, then the personnel ask the owner to get the registration fixed, and then they let them go. If the data is not there, then there can be two cases. Firstly, the car can be an auction car, and all the information on auction cars is online as well. WEBOC is that online repository that is maintained by the customs department. If the data is present here, the vehicle is released on the spot.

Secondly, the vehicle could have gotten clearance under the amnesty scheme that came in 2013. Data from that amnesty scheme is also online, and customs personnel check the vehicle’s chassis number there as well. If data is present here, the vehicle is released. If the vehicle’s details are not showing up in all of the three above-mentioned cases, then the custom duty is not paid in most cases.

SSM: Does the custom department register for an FIR against the owner of an NCP vehicle?

MZ: Yes, according to the directive of the Supreme Court, we have to launch an FIR against the owner of an NCP vehicle when we catch it. This is to ensure that the person faces inconvenience to serve as a deterrent for others aiming to buy NCP vehicles. An NCP or smuggled cannot be released by paying all the duties and taxes. The customs department is not allowed to do that. Once caught, an NCP vehicle cannot be returned in any case. All of the money invested in that vehicle is gone.

SSM: You have gotten hold of an NCP vehicle as the owner has wronged the treasury of the customs duties and taxes. When you auction that car, and it sells for e.g., 10 million and the taxes and customs duties on that car are 30 million, should the customs department not return the remaining 70 million back to the owner?

MZ: The first thing that happens is the adjudication of that car. Two cases regarding that vehicle take place simultaneously—one with the special judge customs and the other one with the adjudicator of the collectorate. The law does not allow us to return any sort of money back to the owner. Moreover, once the customs department gets hold of the vehicle, it becomes the property of the state. All of the funds generated by the sale of that vehicle go to the government treasury. The scenario that you have mentioned in the question holds true for those owners who cannot pay their customs duties, and their cars are on the port. In that case, those cars get auctioned, and funds above and beyond the taxes and customs duties are given back to the owner. This does not hold true for NCP vehicles, as driving them is an illegal offense.

SSM: What are the necessary obligations and duties a citizen should take into account before buying a car to save himself/herself from a fraud?

MZ: WIth every vehicle, there are documents that you can verify. In the case of locally-manufactured vehicles, these include sales tax receipts and documents notifying the showroom from where you purchased that car. In this case, verification can be done by the manufacturer. However, in the case of imported vehicles, improvements are required in the customs department. There is not a one-window operation as of yet; however, if a person writes us a letter to verify the said vehicle, we are duty-bound to respond, and we will. We then tell that person we have the original GD of that vehicle and send back a verification with a cover letter. However, the thing you have suggested is a much better alternative. We are trying to launch a national one-window operation starting from the next year.

That operation will incorporate around 38 government departments related to the import and export of commodities. All of these departments will then come to this website of the customs department. Anyone who wants a verification or a certificate, he.she can conveniently get that from the website. That website will also mention days to complete that task by the relevant department. If the task is not done in the stipulated time frame, the superiors will get involved to sort it out. After one month, the matter will go to the Prime Minister, and the head of the department will be held answerable. Moreover, all the motor registration authorities must also be connected to the WEBOC system.

SSM: How does the department deal with the duplication of registration in multiple cities?

MZ: What we are trying to do to combat this issue is to link all the motor registration authorities in Pakistan. We have seen that the chassis number and documents of a duty-paid vehicle are used to register multiple vehicles under the same chassis number. The system that we are proposing will not allow one chassis number to be registered multiple times. Sometimes when a vehicle goes for registration, the owner finds out that it has already been registered somewhere else. The police department helps here to decipher whether the car’s chassis number has been tampered with or not.

SSM: What sort of officer from the customs department can stop a vehicle? Is there a whistleblower application where a normal citizen can launch a complaint against bullying by a customs officer?

MZ: We usually have a squad with one inspector and four to five personnel. Laptops are given to these inspectors, and they have 24/7 access to the information. The first thing they check is the registration and chassis numbers of the car. If they match, then the engine number is checked to see if it corresponds to the records. Moreover, if the engine is changed, then it creates trouble, and we have to send the car to the laboratory. We also need to develop a complaint cell to counter bullying if that occurs. We also give training to over officers to remain polite in all encounters with the citizens.

SSM: Do you think it is viable to include dash-cams and body cameras for the customs personnel in Pakistan to counter bullying claims?

MZ: This does not exist as of now, and this is a good idea for implementation in the future. It will help counter bullying claims and to control it as well.

SSM: Usually, an NCP vehicle gets into Pakistan through our borders, and there are customs officials sitting there to control this activity. Do you think it is justified to put the entire blame on the consumer while hiding the inefficiencies and ineptitude of the customs department?

MZ: We have a 26000 km long porous border with Afghanistan. Customs officials are placed only on the authorized routes. The NCP vehicles do not come through authorized routes. However, barbed wire is being installed; there are many unauthorized from where these vehicles can be easily smuggled.

SSM: Can you tell the viewers about buying a car that has been in possession of an embassy and the embassy has imported it in the past?

MZ: After a certain time period like 5 years, the duty gets waived off from these cars. Before the embassy sells its vehicle in Pakistan, it needs to get a NOC from the Ministry of Foreign Affairs and from the FBR. Ensure that you transfer embassy vehicles on your name as embassy vehicles are authorized to be driven by embassy personnel only. If there are any duties and taxes accrued on that vehicle, they need to be paid before it gets registered. You can also get verification from the Islamabad collectorate. Moreover, there are times when duty is not payable as the time period has been fulfilled.

SSM: If a person buys an auction car, can he/she verify that car from anywhere or from where he/she has bought it?

SSM: An amnesty scheme came in 2013, and if a person decides to buy such a car, how can he/she be mindful of all the necessary precautions?

SSM: Is there a platform or a window through which a normal citizen can launch a complaint regarding people who are trading in NCP vehicles and if they get knowledge regarding a person committing fraud with others?

MZ: Yes, anyone can come and report at the relevant office of the customs department. People do that very often, and we conduct raids and chase cars based on that knowledge.

SSM: Does the department’s personnel face resistance from the high profile people if they try to lock their vehicles?

MZ: Due to the widespread presence of media in Pakistan, the more high profile the person is, the more cooperative he/she is usually to avoid bad publicity in the media.

That’s it from our side, drop your thoughts in the comments section below. Stay tuned on PakWheels blog for more updates and news.