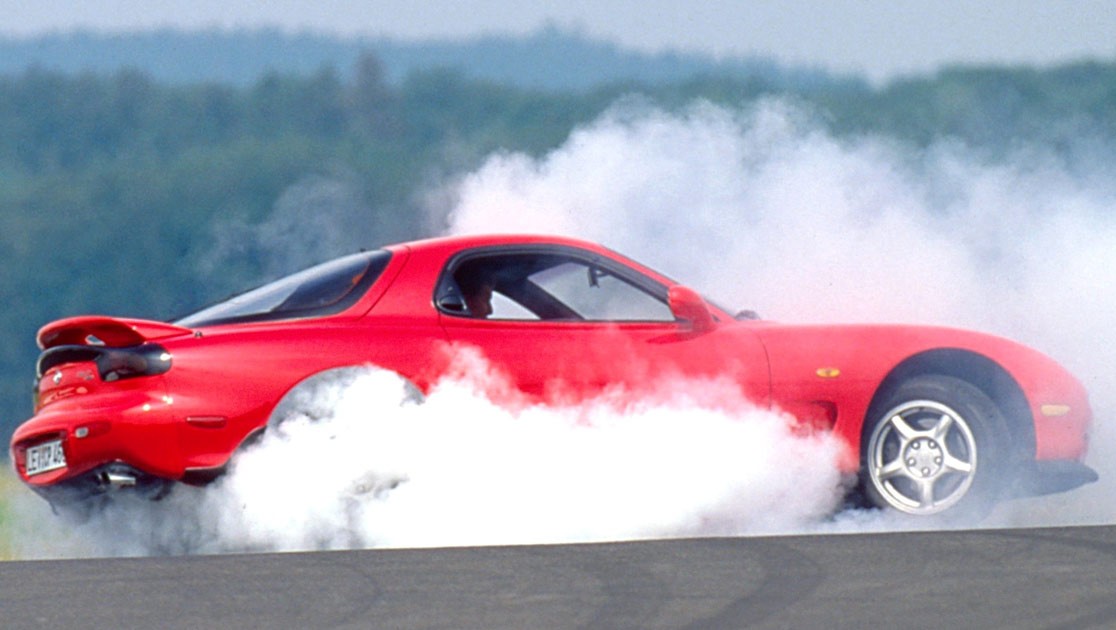 One thing that has divided automotive people all over the world just like Honda and Toyota have in Pakistan is the preference for a front-wheel or a rear-wheel drive vehicle. Both have their pros and cons. We thought to write a blog talking about their advantages and disadvantages and to see which sort of platform takes the lead over the other. Let’s start with front-wheel drive system.

Well as the name suggest, your front wheels are your main driving force. The engine transfers its power to the front tires through the transmission. Engineers had been tinkering with the idea of a front wheel drive for as long back as the 1890s. The layout went through several stages of evolution and different automakers and engineering firms had their take on the system. The first commercial success of the FWD system came in 1929 at the hands of Birmingham Small Arms Company. Audi made their FWD car in 1933. Citroen, a French car maker, had been working with the layout for years (pre and post-WWII). British, Germans, Italians, French, all had their way with the design. The car that actually made the system famous and a potential venture for future investment in R&D by other car makers was the Mini in 1959. The car had the transversely mounted engine and front wheel drive transmission built into the engine. Later Dante Giacosa, a Fiat designer and engineer, perfected a system that we now see in almost all front wheel drive cars. The car had a transversely mounted engine, and transmission mounted next to it driving the front wheels. The layout was compact and cheaper to make and run. The FWD layout got some real attention and popularity in the 1980s. That’s when both European and Japanese car makers started to focus on the layout. Both Honda and Toyota opted for FWD plateform for their Civic and Corolla cars respectively.

Also Read: Do Not Use Regular ATF In CVT Cars. Read More Here!

One of the most important reasons why companies opted for an FWD layout was the cost. It’s cheaper to make, simple as that. Besides, as mentioned above, it is a compact layout. Your engine is laying sideways along with the firewall, and not protruding outwards. Think how your Suzuki Mehran would look had it been a rear-wheel drive car with the longitudinal engine. Compact packing means smaller front end. And that means less material and parts used to make a car. Shorter front ends also meant car makers could increase the cabin size of the cars without increasing the size of the whole vehicle. You have roomier small cars thanks to front wheel drive layout. The FWD unit usually helps in weight saving as well since they are usually lighter compared to similar RWD unit.

The layout does not only have cosmetic or ergonomic improvements, but you also get some specific driving characteristics as well. Like the fact that your wheels exert the driving force in the same directing you are turning, since turning wheels are driving the car as well. For example, picture you are turning left in your FWD car. Your wheels are not only pointing left but are driving the car in the same direction as well. The thrust of the car is in the intended direction of the car. That means no tail spinning like RWD car where rear wheels are pushing straight, but front wheels are pointing somewhere else. And that same aspect of front wheels driving towards the same direction as they are pointing can cause a torque steer as well. Torque steer can be a problem in powerful FWD cars. In torque steer, the steering pulls to one side under heavy acceleration. Understeer is also one of the issues related to FWD cars. 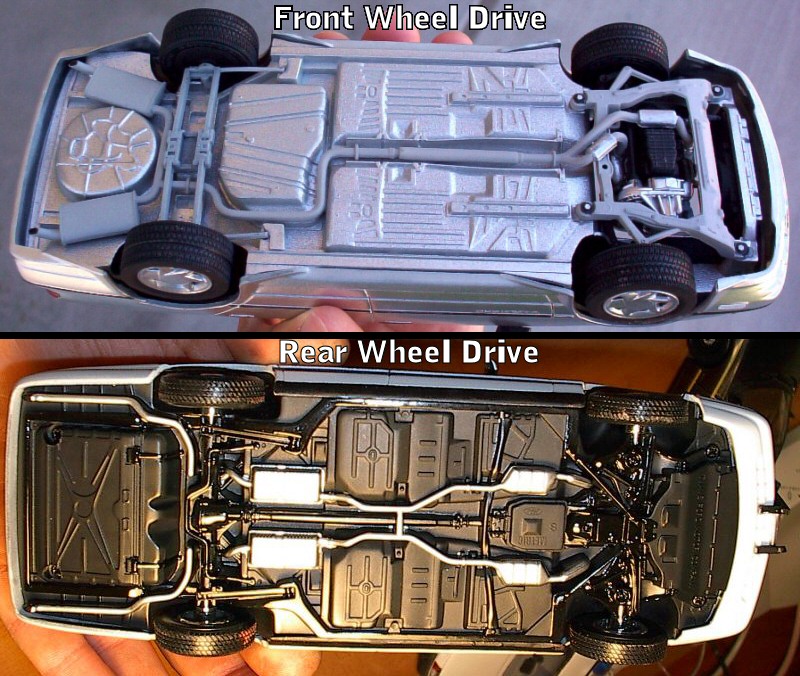 Also Read: Change Your Car’s Transmission Oil On Time Before It Hurts Your Wallet

You can also suffer loss of grip in such heavy acceleration since the weight of the shifts backward when you race hard. The front wheels become loose, because engine weight lifts off the wheels. It then causes the tires to skid until they bite back into the ground for grip. You might also need to spend extra on front tires since they are under stress all the time compared to rear tires, hence the need of rotating your tires every 10 to 15 thousand kilometers.

RWD layout is relatively simpler. Engine is usually mounted longitudinally, and the power is sent to the rear wheels through a drive shaft. Front wheels point in the direction you want the car to go, and rear wheels apply the thrust.

The strongest point about the RWD layout is how strong it is. They are tough and are used in all vehicles that are considered as workhorses. All your heavy duty vehicles are rear wheel drive. If you have been close to a Hino dumper truck or some trailer, you would have seen that giant spinning shaft going right through the middle of it. Your Toyota Hiace, or double cabin pickup or Suzuki Ravi or Bolan, all are rear wheel drive cars. Rear wheel drive cars have a better towing capacity as well as ability to haul weight. It is far stronger than the FWD layout where two thin stick like axles drive your car.

Also Read: What Does P, R, N D, S And B Stand For In Newer Cars With CVT Gearbox

In a car, an RWD layout provides better weight distribution. Since not all of your machinery (engine+transaxle) is residing in the front of the car, you can reduce the weight from the front and transfer some of it to the rear. Then you have a giant axle in the back of the car where the drive shaft connects. That extra weight at the rear balances out the front of the car. Better weight distribution means the car is nice to handle and drive. Also, you get better weight transfer. When you accelerate hard, all of the weight moves backward. And since your rear wheels are spinning to thrust the car forward, all the moving weight comes backward and rest on them, making them bite hard into the tarmac, and providing your tires some extra grip.

You can also get longer life from your tires since you are splitting the workload. Your front tires are pointing, and your rear tires are driving. But that is only possible provided you don’t do burnouts on your rear wheel drive car every chance you get. 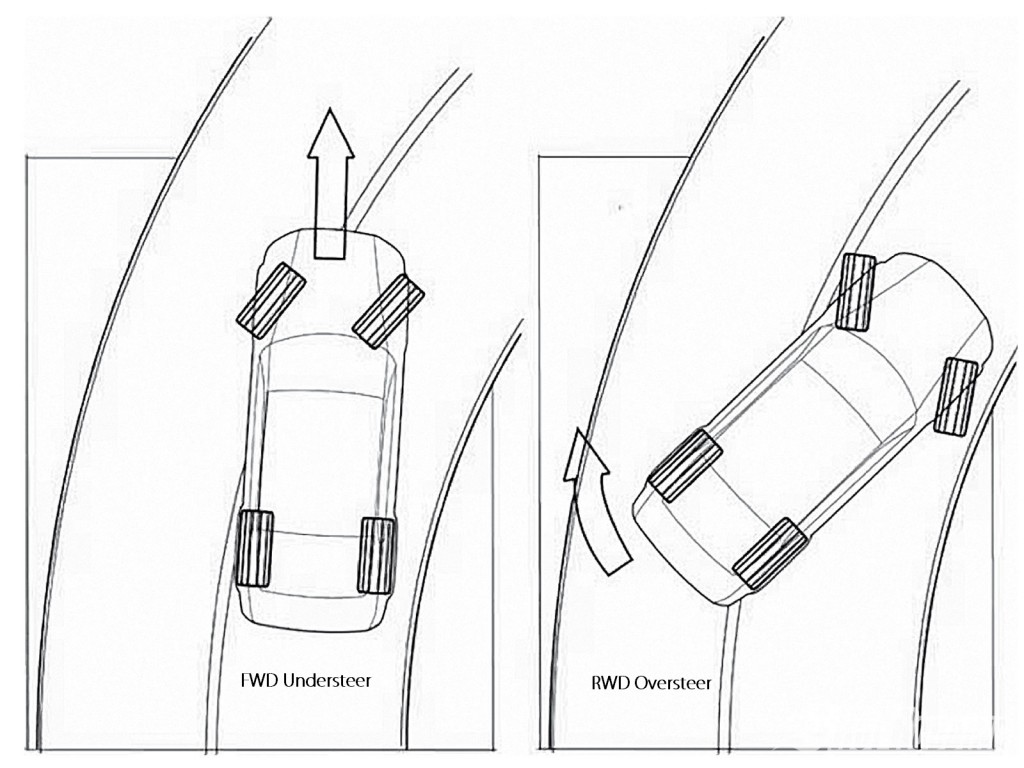 So this is pretty much it. Of course, there is a lot more to both systems than what has been discussed here. Both work in certain scenarios better than the other system. If one is useful or applicable in certain situations, other might not work in that situation and vice versa. But both do what they are made for; to haul people around with ease and comfort.