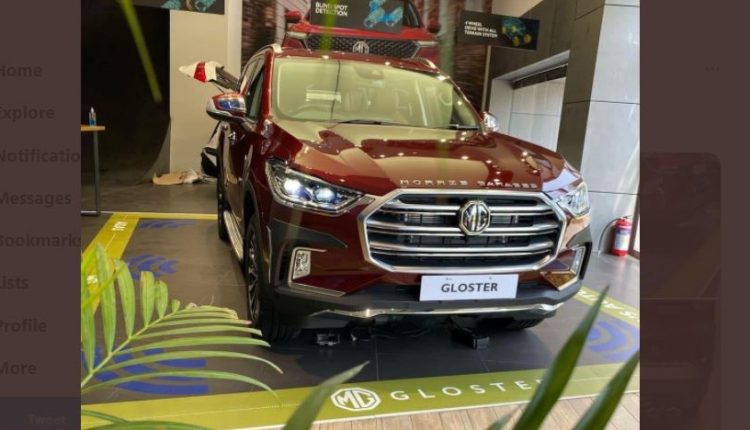 MG Gloster, another potential launch by MG Pakistan has been spotted in Islamabad, recently. Although the car badges were covered with tape, however, our sources has confirmed that it is Gloster. As per our sources, this is the same vehicle, which was displayed, when Prime Minister Imran Khan inaugurated the $100million worth MG manufacturing plant in Islamabad on January 1st, 2021.

In the video, one can see the interior and exterior of the black SUV. In one glance, the car gives an executive feel and look, from both inside and outside.

Earlier, MG Motor’s local partner Javed Afridi shared the pictures of this same car. Sharing the photos of the SUV, Afridi simply wrote ‘MG Gloster’. However, the company has not issued any official statement regarding the launch or expected price of this car. So, we all have to wait and watch.

The Gloster would surely be a great addition in the local market, which is already thriving due to launch of multiple compact crossover SUVs. Along with MG, companies like DFSK and Proton are also launching their SUVs. Meanwhile, KIA Lucky Motors is already dominating this segment, followed by Hyundai Nishat.

Earlier this month, MG Pakistan launched another crossover SUV, MG ZS. The 1500cc vehicle is kind of base variant of MG ZS, as it  comes without Panoramic Sunroof or Turbocharged engine. As per the company, it has started the booking of ZS at price of Rs4,099,000, making it cheapest compact SUV in Pakistan.

The company has been claiming phenomenal sales in the country. On January 25, the company said that they have sold 1,000 cars in Islamabad.

Earlier this month, Javed Afridi, surprised us with the news of MG selling 1,000 MG HS SUVs in Faisalabad. Afridi had shared the pictures of a celebratory event on his Twitter account congratulating MG Lyallpur for achieving the milestone. This time, his #1kMGcars post starred “MG Capital”.

MG Pakistan has been on a roll since the brand’s launch in the country. The company first claimed that it had received 10,000 bookings for its first car in Pakistan, the MG HS. However, the reports were not true. Later came the news of selling 1,000 units of the same car in Faisalabad. And then, the company celebrated its sales of 1,000 MG HS cars in Islamabad. (O-MG!)

That’s not it, though. MG Motors has also recently acquired Greenfield status under the Auto Development policy (2016-2021). The company then went on and launched their second car in the local auto market. No formal launch event or anything, but Pakistan’s most affordable SUV MG ZS is here.