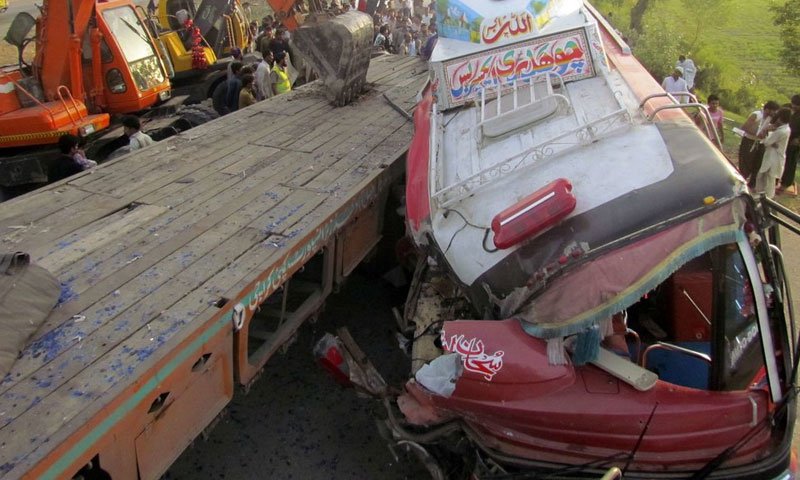 Khairpur accident and the transport mafia of our beloved country

KHAIRPIUR: At least 57 people including 10 children were killed in a traffic accident that involved a truck and a passenger bus near Khairpur, Sindh on Tuesday.

Earlier today, dozens of people got killed in a head-on collision between a passenger bus and a truck near Khairpur, Sindh. November 11 was not a good day for many. I woke up early today to the news of 57 deaths.

Is it not possible to fix the system? Obviously it is possible, but the authorities are not willing to.

Everyone living in Pakistan knows how these bus drivers drive on highways. They race on public roads and even switch lanes without warning as if they are riding a bike. Not only they risk the lives of the people on board but also of the people on the roads.

The traffic police do not say anything to them as they all are part of the transport mafia.

Even inside the cities they are reckless. I travel daily on roads like Mai Kolachi, Native Jetty Bridge and other areas near West Wharf and experience their reckless driving in the area. They do not care about any other vehicle on the road, be it motorbike, rickshaw, car, jeep or even a truck. Ever wondered why? Because they do not own these busses and if they hit someone, they just flee the scene like nothing happened and their bosses in the mafia take care of the situation.

A couple of months back, I was with my dad driving towards the new American Embassy on Boat Basic Road. We were stuck in a traffic jam because of some road blockage, the bus in front of us was in a hurry like they always are. We were literally 5-6 meters away from the bus as my dad is well aware of how these bus drivers drive.

What happened next left us spellbound.  The bus driver saw a footpath on his right side and started to reverse the bus as he had a car very close in front of him and our car just on the back, only a few meters away. My dad had one of his hand on the horn while with the other one he was flashing the headlights on him. but all in vain. He banged into our car, ruining the front end of the vehicle and did not even realize that he had hit a car. My dad and I immediately left the car and, as soon as we came out, he banged into our windscreen. We could not do anything as the driver neither had a driving license nor documents of the vehicle. The only option we had was to grab him and hand him over to the police, but we knew that even after all that efforts he would give Rs. 100 to the cop and would be on his way out.

Incidents like these happen on a daily basis in the cities and as well as on the highways. These bus drivers drive recklessly on the roads, endangering the lives of the occupants and of the people who are on the road. They do not fear the authorities nor do they care about the traffic laws. Most of them drive without a license and without proper training. The police know it, the ministers know it, but they do not care.

I would really want the government to step in and take this matter seriously. The  transport mafia is not only liable for the killings of hundreds of people every year but also the main cause why the public transport system is not improving in Pakistan. Just to earn more profits, they are risking the lives of people and not providing them with better facilities.

I’m sure most of the readers would agree with me that incidents like the Khairpur accident, happen because of the active transport mafia in the country.