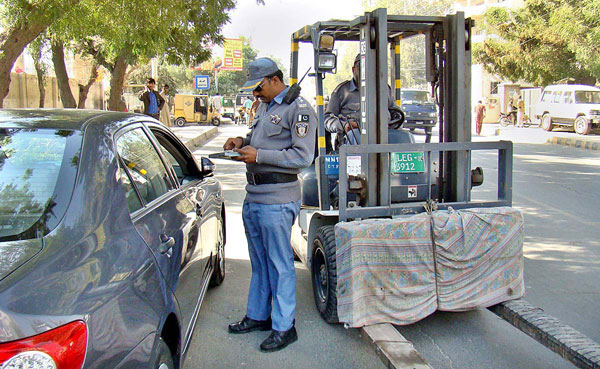 Life is getting easier for the residents of Lahore.

The Lahore Traffic Police Department will now be issuing traffic Challans (traffic rules violation tickets) through Android Phones.
After the Easypaisa Traffic Challan payments in KPK, now the residents of Lahore are being introduced with e-ticketing system.

The new e-ticketing is aiming to replace the old paper Challan system. So you will be seeing traffic police wardens with Android phones and small Bluetooth ticket printers. The main reason behind this new practice is to reduce the cases of malpractice and bribery, which is a normal practice experienced by Pakistanis on the roads daily.

Recent estimates show that around 2200 traffic wardens are working day and night in order to maintain a smooth flow of traffic. These wardens face problems relating to the use and misuse of the fine books.

Civilians also face problems with the traffic police. At times, they have to return without their documents from the Traffic Police Department, since the police don’t hand over their documents for one reason or the other.

With this new e-ticketing system being introduced, there will be no possibility of tampering with records and this will ease the civilian concerns about the system being vulnerable.

The electronic issuance of the Challans will solve many issues that are faced by the traffic police warden’s and citizens. The bright side of the system is that it’s tamper-proof and will raise the culture of law-administration. People will not doubt that the system is flawed and this will help in building the confidence between the civilians and the traffic police.

The system will also guarantee that the traffic officers are following their duties properly and everything will be filed electronically. The e-ticketing system will offer assessment centers on vital performance indicators. It will also have the GPS feature and will help in tracking locations on the road.

The first phase of e-ticketing will be based on testing the practicality of the system, which will be held for a month.
In the initial phase around 20 android phones and 20 small Bluetooth printer devices will be given to the CTP by the PITB. The Chief Traffic Control Officer, Sohail Chaudhry confirmed this figure and included that in the first phase the system will assist in identifying the ambiguities in traffic policing.

The system is capable to offer the traffic police with effective categorization options like the:

For vehicle owners, the biggest and the best benefit is that they can pay their fine right at the spot. Now there will be no need to visit the National Bank branches and wait in long lines in order to pay your fine.

It will be the traffic officer’s duty to deposit the payment of the fined tickets in their respective sectors, because the system has a centralized database, this means that the officer cannot keep the fine amount as bribe.

So what are your opinions people, do you think this e-ticketing system is a good initiative? Will it help in improving the mentality of motorists and traffic police officers? Share your thoughts with us in the comments.