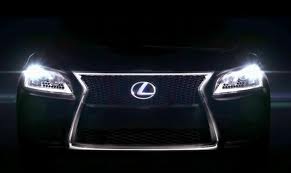 Lexus spindle grille will be a trademark for it’s cars

Many car’s have significant and distinct characteristics that makes people recognize them upon first glimpse of the passing car. These trademarks are especially used to keep luxury car marques distinct from each, such as BMW’s kidney grille.

As Toyota is aiming for Lexus to become the a luxury marque as popular and as precious as it’s German rivals, it has decided to make the ‘spindle grille’, as it’s design trademark.

According to the Kaizen Factor blog, Toyota has filed numerous trademark applications in both the United States and Canada for various spindle grille designs.

The main differences in the designs are the inserts, either a zig-zag mesh like the current F Sport models of the CT, IS, GS, RX and LS, or a horizontal pattern like the non-F Sport models. But there’s also a new “vertical bar” design revealed by the filings, which the report speculates may be applied to the next-generation IS.

This signature spindle grille is a design inspired from a waterfall, though it doesn’t looks like one.