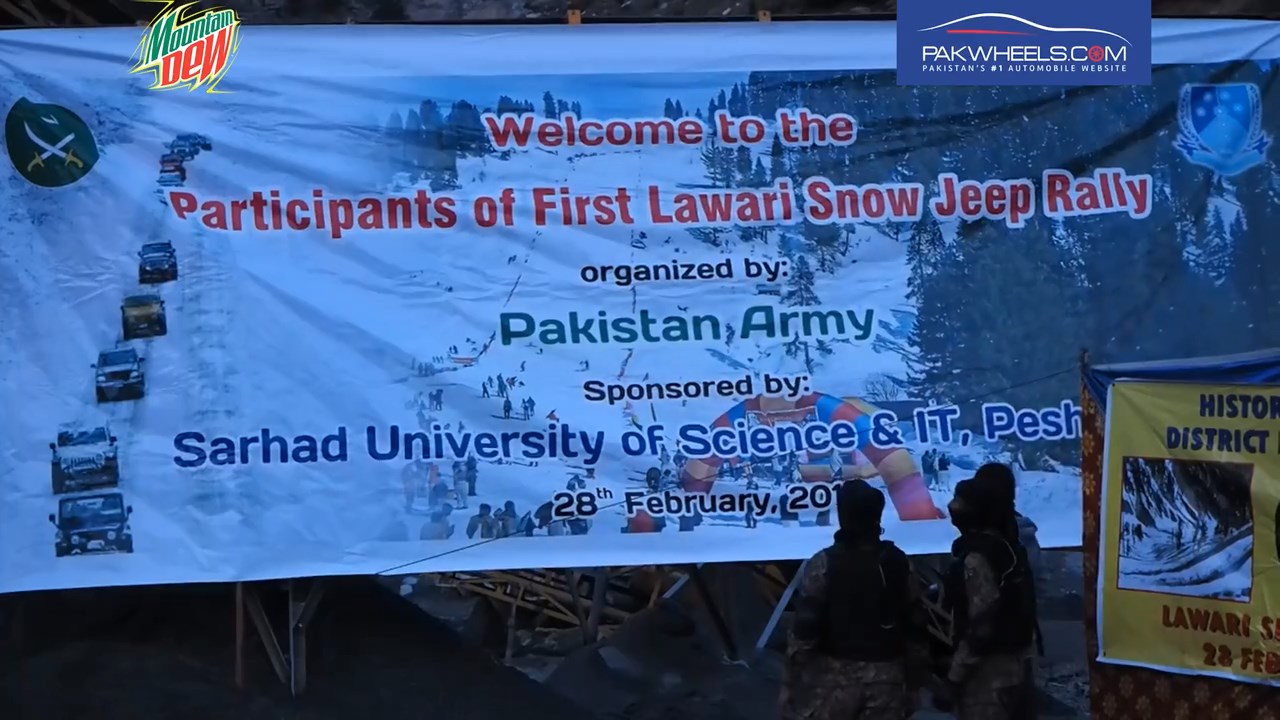 Pakistan is undoubtedly a beautiful country. It is filled with every kind of natural beauty you can imagine. From the thick forests to deserts, to the rivers, to the snow covered mountains, we have everything in this amazing land. It is the lack of opportunities that prevent people of Pakistan from reaching the far-flung areas of Pakistan for discovering and enjoying all of this abundant natural beauty.

The northern areas of Pakistan have started to see an increased number of tourists as compared to the previous years, thanks to the continuously improving peace, road network, and people becoming aware of the demanding driving and road conditions. And to bring the area into the limelight, Frontier 4×4 Club conducted first of its snow rally in Pakistan. The one-day snow jeep rally was arranged by the collaboration of Khyber Pakhtunkhwa provincial government, Pak Army, and the local bodies. PakWheels was the proud sponsor of the event along with a few others.

The Vice President of Frontier 4×4 Club Yasir Khan Yousafzai explained why this rally was held at such a remote area,

“We decided to hold this year’s snow cross at an area with is usually unreachable for most of the people, including the locals. An area that is notorious for its difficult terrain and famous for being unpassable and is referred among the enthusiasts as ‘the hell valley’. The area stays blocked for 3-4 months of the year due to land sliding and extreme weather conditions.”

Chief Marshall Burhan Kundi further remarked about the challenges of this racetrack before the race day,

“This race track is a challenge since it is a new track for the drivers. The organizers took a survey of the race track, and we found the conditions to be favorable, and we hope the race will be held according to the plan tomorrow.”

The participants of the rally started their journey to Lowari Pass from the city of Peshawar. They were welcomed by the residents of Dir City with excitement and delight. The rally convoy stopped in the suburbs of Dir for a night stay. Next morning the participants then moved towards their destination, the race track.

The response from the people of the region was absolutely fantastic. They welcomed the rally participants with open arms. Burhan Kundi dubbed the response “overwhelming”.

Around 35 to 40 4×4 vehicles took part in the rally that were brought from Peshawar. It must be mentioned that Frontier 4×4 Club has members from all over Pakistan and not just from KPK or northern Pakistan. Captain Khalid Khan is a senior member of Frontier 4×4 Club and lives in Karachi. He came all the way from Karachi just to participate in this event. The race event was attended by the members of Emarat 4×4 Club members as well.

Khalid Khan explained the dangers of high-speed rally cross on the black ice,

“It was my first experience to drive on black ice while controlling 4×4 vehicles. It was a unique experience for me. And such conditions provide opportunities to new rallying enthusiasts. Promoting this region is our priority.”

The rally track was 29.5 kilometers and the infamous Lowari Tunnel constitutes or around 8.4 kilometers of the total length of the race track. After the tunnel, the Lowari Pass starts which was named ‘hell pass’ by the British before independence.

Rahatullah Khan was the local representative driver while other two are the members of Frontier 4×4 Club. GOC Malakand Division Major General Nadir distributed the prizes among the winners and participants of the rally. He was talking to the press about the rally saying,

“The snow jeep rally is aimed to promote this snow covered area as well to provide an opportunity for entertainment to the people.”

The President Babar Khan and the Vice President Yasir Khan of Frontier 4×4 Club also thanked PakWheels for its participation and contribution in this first snow rally.

Such rallies are no doubt a great opportunity for the Pakistani auto enthusiasts but on the other hand, such events help promote the positive and friendly image of Pakistan on the international forums. Our country has been going through tough times lately, and previous few years especially, have been difficult. Helping organize such events not only brings healthily and positive activity to the people but also shines a light on the hopeful future of our country. We hope to see such events in the northern areas of Pakistan more and more. Enjoy the amazing videos below:

Frontier Snow Cross Powered By PakWheels.com – Episode 1 Main highlights of the first Snow Jeep Rally in proud sponsorship with PakWheels.com which took place at the Lowari Top on February 28, 2016. The event was organized by Frontier 4×4 Club.

Frontier Snow Cross Powered By PakWheels.com – Episode 2 Main happenings and interviews in the first Snow Jeep Rally in proud sponsorship with PakWheels.com, which took place at the Lowari Top on February 28, 2016. The event was organized by Frontier 4×4 Club.

DIY – 4 Tips Regarding the Maintenance of Your Car Battery

Toyota Pakistan Anticipates a Major Down in Sales