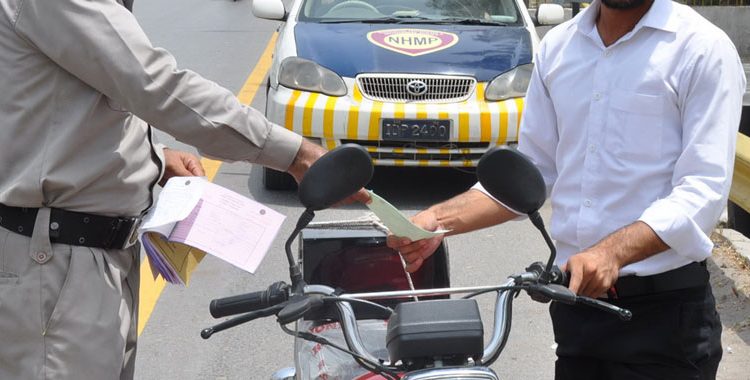 Everyone’s heard of the recent ban on unregistered vehicles on motorways. The new update is the National Highways and Motorway Police (NHMP) has increased the fines on different traffic violations. Drivers who don’t follow traffic rules on motorways and highways will face heavy fines. Here are the new penalties.

The fine for overspeeding on motorways and highways has been increased to Rs. 1,500 for motorcyclists, Rs. 2,500 for car drives, Rs. 5,000 for HTVs (Heavy Transport Vehicles), and Rs. 10,000 for PSVs (Public Service Vehicles). The maximum speed limit for light vehicles is 120 km/h and for heavy vehicles is 110 km/h.

Motorcyclists driving without helmets on motorways or highways will now be fined Rs. 1,000.

The police will now charge motorcyclists, cars, and LTV drivers driving without license with Rs. 5,000 fine and HTV and PSV drivers with Rs. 10,000 penalty.

Violation of lanes will now cost Rs. 1,000 for the motorcyclists, cars, and LTV drivers and Rs. 5,000 for HTV and PSV drivers.

Non-fastening of the safety belt while driving will cost Rs. 1,500 for cars and LTV drivers and Rs. 3,000 for HTV and PSV drivers.

The motorway and highway traffic violation fines have been static for years. NHMP has taken a big step of increasing the penalties to take the defaulters by the collar. Everyone follow the traffic laws and be safe!