Which new car brand people are excited about in Pakistan?

The previous government introduced automotive policy 2016-21 to attract more automakers from around the world to come to Pakistan and start their operations. Till now over ten foreign automakers have entered in the country and a few of them have also started selling their products as well such as Hyundai, KIA, and Changan. Changan Automobiles has even begun to manufacturing their vehicles locally, which is indeed a piece of great news.

Without any doubt, the new automakers will surely diversify the local auto industry and offer new products to the local consumers to choose from. Moreover, the supply-demand issue of the vehicles will be curbed. PakWheels.com conducted an Automobile Industry Survey in 2018 to get insights into what people are thinking about different brands and products. Among many other questions, PakWheels.com asked respondents to vote for their favorite new car brand which has or is coming to Pakistan.

The people rated Hyundai as their favorite new car brand, see the full list below: 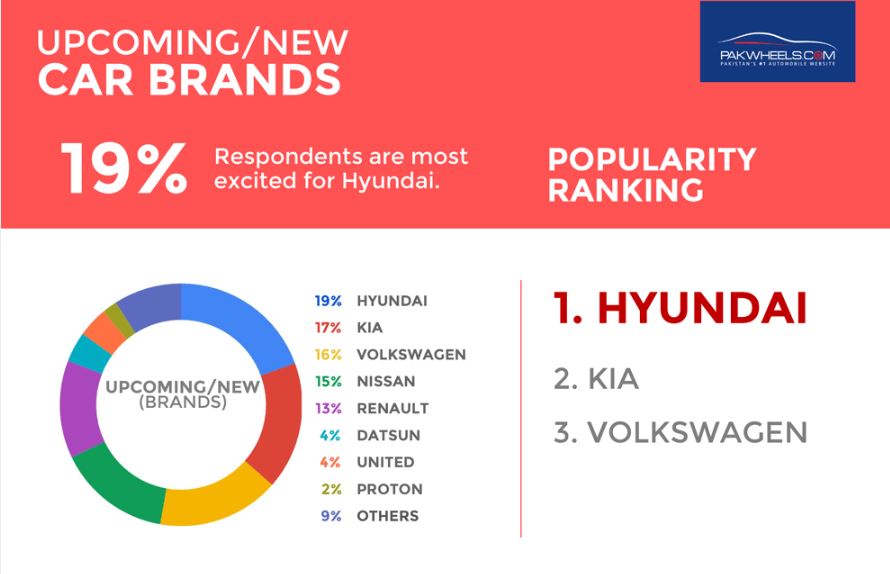 Note that Korean automakers, Hyundai and KIA, have already launched their vehicles in the market. Hyundai has launched Sante FE and Grand Starex while KIA has launched its state of the art Carnival. Moreover, United Automobiles has shipped an 800cc hatchback car, Bravo, which has received a lot of praise from the customers.

Aside from Korean automakers, the French company, Renault, is reportedly backing out of launching vehicles in Pakistan.

What is your favorite car brand, tell us in the comments section below.

Tax from new car registration down by 10%