I am sure most of you are very excited about the recently launched Toyota Altis Grande 1.8l. With the 11th generation Corolla Altis, Toyota has brought back the 1.8l engine so that it can be in the same league as its major competitor in Pakistan i.e., Civic. Not just this, but like always Toyota has this time even brought forth a new, unique and interesting feature in their car, the paddle shifters to drive the car in a sporty fashion for the true speed freaks. Previous example of Toyota leading in innovation is the cruise control which was launched firstly by Toyota in Pakistan.

I would also like to send forth a very gracious thank you to Toyota Southern Motors who invited me for a test drive of the new Altis Grande, after having seeing me with an interest in their vehicle.

Editor’s Note: This is not the official PakWheels review rather, a member’s review of his experience with the new Altis.

The 11th generation Corolla is probably the best looking Corolla ever made in my opinion. I know there are die hard Corolla Indus fans (1999 model) but it must be agreed upon that this time; Toyota has for the first time made a Corolla which is a potential head turner. Assuming that everyone who reads this article has seen the new Corolla live now, I will now explain some details of the exterior. 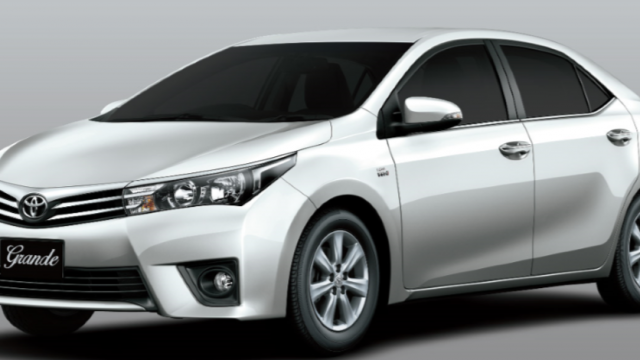 Starting off with the headlights; although extending too much to the sides but the chrome plating around the bulbs inside the light make them look very gracious and perfect for the car in every way. The level of detail exhibited by Toyota in the sense that the chrome grill continues on to the inside of the lights so it gives a better look is just extravagant ( I’m sure you will understand what I am trying to pinpoint if you look at a picture of the front). 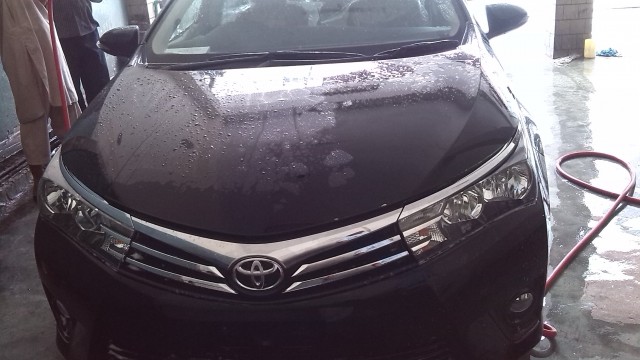 Talking about the sides now; because corolla have adopted a “fat car” look (didn’t know what else to call it), the sides do seem like they are missing something and feel a little bit out of proportion in comparison to the front and back. Perhaps the installation of side skirts like it was always done in the previous Corolla’s would have made it look even better but it seems Toyota did not think so. Or would add them later on as optional kits.

Another thing to notice about the side is that although the C style doors complement the car’s design but if you look at the space between where the rear doors end and the tail lights begin; that is quite small which makes the boot look quite unattractive (when viewing it from the side) giving a feeling like it’s been chopped off or something. Doing such a mistake even after increasing the overall length of the car is a major design flaw by Toyota. 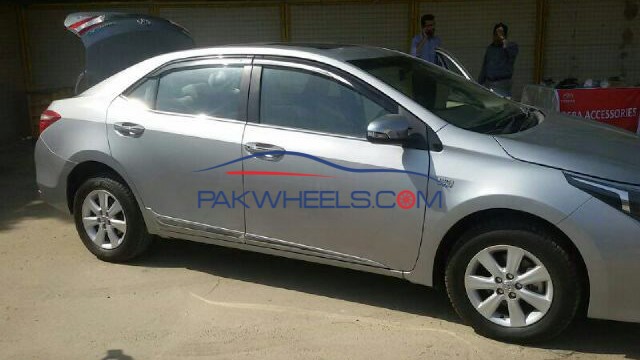 Moving on to the back, I have heard a number of different views on Corolla’s back side. Some people say it is the copy of the Japanese Toyota Belta, some say of the 2009 Toyota Camry and so on. And to be very honest I am sure you will also notice this similarity if you look at the rear end of the new Corolla now. All in all I will not say that this is in any way a bad looking car from the rear. The rear end might be a little less elegant than the front but it does give the car a complete look. The introduction of installing reflectors by corolla in the beginning I felt was a very bad idea because they looked horrible on the 2009 model but the reflectors on this one really do add to the beauty of the rear end of this car.

The major let down in almost every generation of the Corolla has always been the interior and it is with a heavy heart I have to say the interior of this 11th generation Corolla (namely Altis) is also disappointing when viewed in comparison to its Competitor in the Pakistani market. The interior although much improved than the previous model is still not upto the mark for a car worth 23 lac Rupees. The build quality of the interior is doubtful as it seems very plastic and not on the luxury side. But, this is the way for every car of the future. Cheap and lightweight plastic to aid in fuel economy. 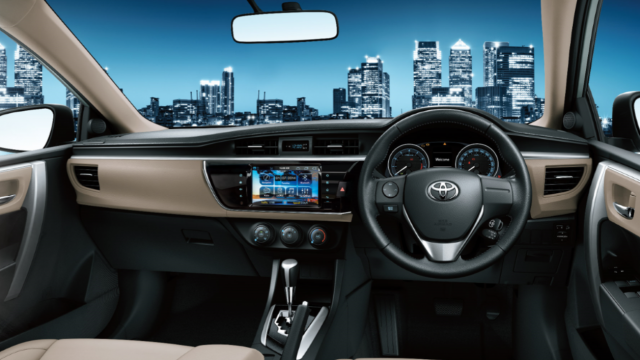 Flat dashboard design just does not give the car a luxurious look from the inside as a somewhat similar dashboard can also be seen in the Japanese Daihatsu Mira (a car less than half the price of the Altis). The steering wheel and speed dials on the other hand I must say are quite attractive. Also the installation of an android system in the infotainment system is something to be praised as it is very user friendly.

One thing worth mentioning here is the back camera which is absolutely awful. And the steering mounted controls give the worst build quality feel in the whole interior.

As you sit in the driving seat, the leather knitted steering wheel with the paddle shifters and the speed dials give you a very sporty look. The screen flashes warning for ‘fasten your seatbelt’ making you feel as though you are about to drive like a speed freak though it is not such an uncommon thing in cars abroad.

The startup and engine noise of this new model gives a calming feel but as you step on the pedal in a stand still mode and the rpm reaches 3000; the engine noise seems very over powering.

Also this model has lost that wonderful take off noise you can experience in the older Corolla (2009-2014 models). So as you put the car in D and drive off you immediately notice how light the car feels. The electronically powered steering is very light and the car drifts off in such a manner that you do not feel like driving a big car. This has both its pros and cons: Pros being that this will make maneuvering the car in heavy traffic very easy. The con is that, this makes the car feel relatively unstable on the road; something which is not desirable in a car of this stature. 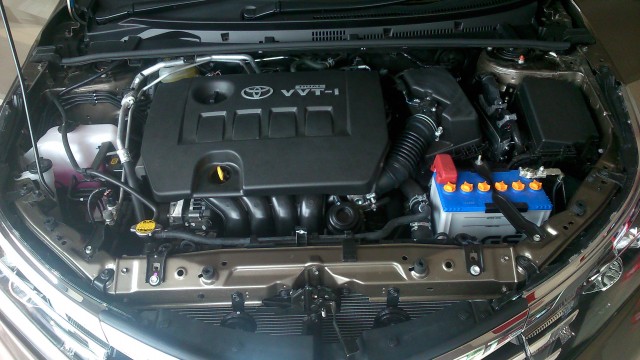 Moving on to the acceleration bit; but I feel I should explain about the transmission before getting on to this. As you all must know this car features a CVT transmission for a smoother, economical ride. This is the same transmission you will be able to find in a lot of Japanese imported Toyotas; such as the Corolla Axio, Vitz and so on. If any one of you have driven one of these cars before you will understand what I am going talk about now.

As you step on the pedal gradually, the car takes off in a very smooth manner keeping the rpms down, you will not feel any gear change neither will the car spiral out of control and go to a very high speed. During my drive on 4-5 km stretch, when I kept the rpm constant at 1500-2000 the car cruised very nicely giving a very light (but unstable in some manners) feeling as it reached a speed of 90 or so.

Now on to the part I feel most people are excited about; when I floored the accelerator from a standstill position the car did not give me a jerk like I was expecting to get. This jerk is one which most people quite enjoy as it gives a feeling as though the car is very powerful and ready to take off into the sky.

The main reason behind this is the CVT transmission which has never been a favorite for instantaneous acceleration. The RPM meter will show 3000-4000 but the speedometer will not be showing the rapid increase in speed. This is in general just a drawback of the CVT transmission; to reach high speeds in such a transmission; you have to give the car enough time and space to get into its flow and same is the case with this new Corolla Altis. The top speed I touched even after flooring the pedal was 90-100 which I felt was very disappointing for a 1.8l car. 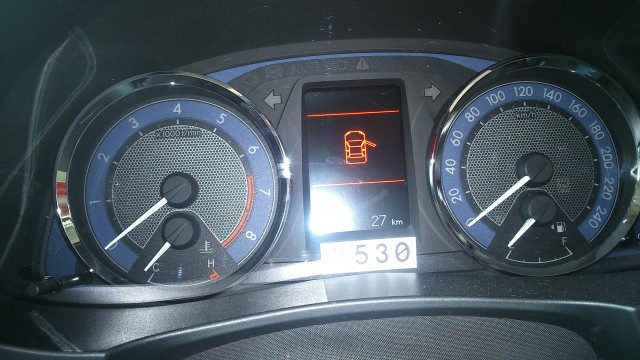 Moving on to the pedal shifters, one thing which I felt very nice about is that you can change down manually even using the shifters while in D so that if sometime you are stuck in traffic and want to overtake, you can easily de-shift the car using the paddles, get instant acceleration and easily overtake.

The car in manual mode was surprisingly very nice to drive using the paddle shifters as you have all the power of the car at your disposal and changing gears is as easy as just flipping a pedal. Hence this means the only fun you can have while driving the car is when you are using paddle shifters as they are absolutely brilliant, there is no lag while changing gears and you feel like the true powerful Altis is on your command. The cabin of the car is extremely sound isolating, no outside noise at all; the only thing you can hear is the rumble of the engine which is not at all good.

The vision from inside is also quite good from the driver’s seat so you could shift up and down using the pedals in complete comfort.

So basically my verdict is that if you want to drive a car which is the same as a Corolla Axio but with the added benefit of manual mode, you should opt for the Toyota Altis Grande 2014. The simple version of the Altis is that I feel completely useless, as I don’t think anyone will enjoy driving the car without the paddle shifters. Toyota this time has definitely stepped it up a notch but I will still say that Toyota has not come up to its major competitor’s mark in Pakistan. 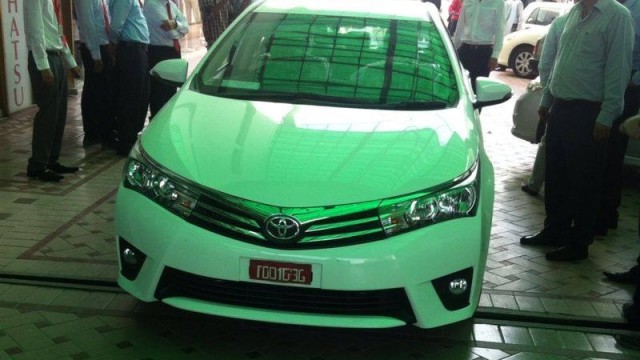 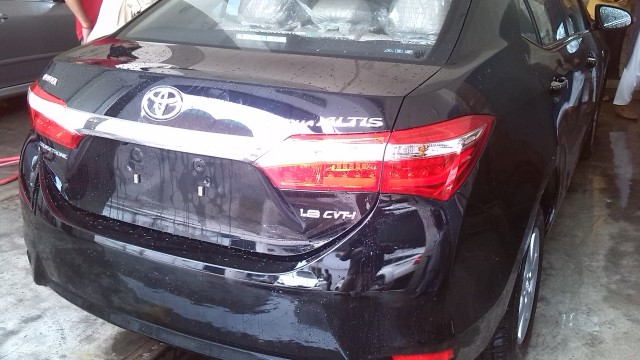 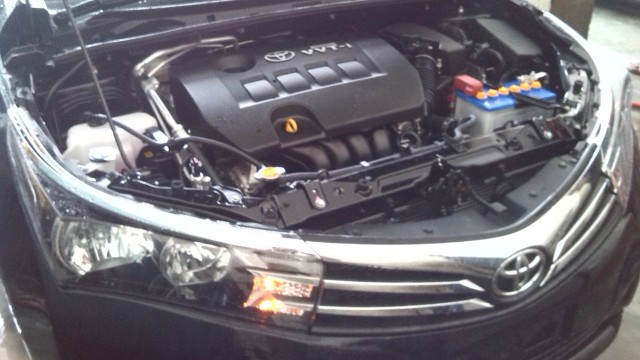 When will the Suzuki Swift facelift come to Pakistan?

Prev Next
30 Comments
Leave A Reply