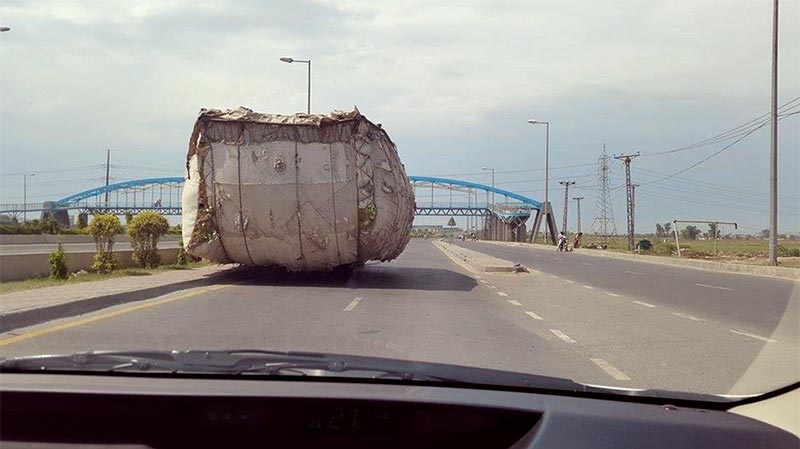 Seeing overloaded trucks/tractor trolleys is a common sight in our country. Our people believe that if a person takes two trips for the same purpose, his masculinity gets decreased. I was in Phase 8 DHA recently when I came across this monstrosity of a truck and took a picture for reference. You could barely see the truck due to the contents it was carrying. I believe it was loaded up to the absolute limit. And this isn’t a village or anything; this is DHA Phase 8, parallel to the LAHORE ring road. It was almost covering two lanes and I could not cross it (as you can judge by the picture).

A car driver thought he could cross this, and as he was about to overtake it, a gust of wind blew left to right, the contents moved towards the right and touched the car. Luckily it was soft material so no harm was done except maybe a minor heart attack to the driver. I continued behind the truck for a while until it turned into a junction and we parted ways.

This is a practice which should be discouraged. Our poor roads have had enough. There are already many potholes or “khaddas” on phase 8 roads, plus overloaded vehicles pose a threat to themselves and the traffic around them. Increased weight above the design limit means that their stability and performance like braking/turning is compromised, highly increasing the chance of an accident. They could also pose a security risk as the truck could be smuggling anything in them that could possibly be used directly/indirectly in terrorist activities. Security and traffic controlling agencies should check them in this regard and overloaded trucks should be fined heavily to discourage this practice. Also, entry of trucks in residential areas should not be allowed in daytime and should only be permitted during the night. By this we can decrease the probability of accidents related to overloaded vehicles.

The evolution of Pakistani Corolla in one single infographic