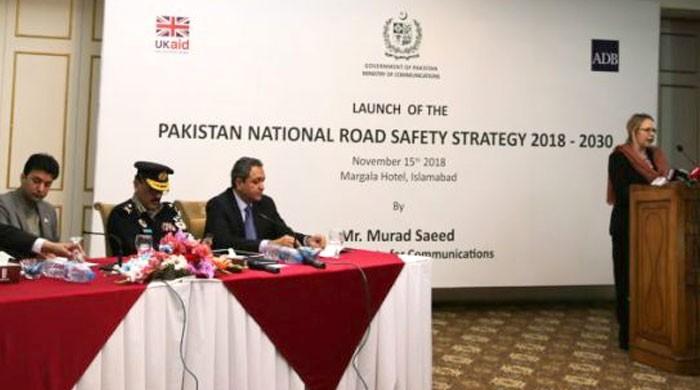 The State Minister for Communications, Murad Saeed, on Thursday, launched Pakistan’s first ever National Road Safety Strategy (2018-2030) with a mission to save lives lost in road crashes.

The rising death toll on the roads of Pakistan has led to the introduction of the first National Road Safety Strategy (2018-2030), which was launched at a ceremony held in Islamabad. The strategy launched by Murad Saeed is supported by the UK’s Department for International Development (DFID) for the sake of technical assistance grant and administered by the Asian Development Bank (ADB). The strategy consists of a series of action plans that would be implemented up to 2030. The key actions included in this strategy that would be implemented by the government of Pakistan consist of ensuring the use of helmets and seat belts while travelling, improving the safety standard of roads including vehicles, improving standards for driver licensing especially commercial drivers, running various awareness campaigns and ensuring the access to highest quality emergency medical services to the victims of road crashes across Pakistan.

The ADB’s Deputy Country Director for Pakistan while addressing the event said that, undoubtedly the launch of this strategy is a wonderful step towards ensuring road safety however, sustained efforts are necessary over a longer period of time for proper implementation of the strategy. On this occasion, the Head of Economic Growth Group of DFID told that according to rough estimates, almost 30,000 people die on the roads of Pakistan each year. The introduction of road safety strategy, in collaboration with the government of Pakistan, is a huge step towards improving the policies and ensuring the safety of road networks in the country.

According to an estimate, someone is either killed or badly injured, after every five minutes in a road crash in Pakistan which is an alarming situation for the law enforcement department. The economic cost as a result of this human suffering is estimated at nearly 3-5 percent of Pakistan’s GDP. With the rapid economic growth in Pakistan and expansion of road infrastructures as in the case of CPEC, there is a lot of room for improvement in the road safeties. The quality of roads need to improve and with the safe travelling speeds on safe vehicles, enormous improvement can be brought in the system. Furthermore, various safety awareness campaigns across the country would help significantly in the implementation of the road safety strategy.

Murad Saeed told that the PTI government will leave a modern road network for the nation at the end of its 5-year term that would reflect the vision of Prime Minister Imran Khan. He stressed upon the proactive role of media in order to create awareness among the people and ensuring road safety in Pakistan. The introduction of this road safety strategy would be particularly helpful in keeping the more vulnerable pedestrians, motorcyclists and passengers of three-wheeled vehicles, safe on the roads. The government has decided to get an implementation progress report every six months to serve the purpose in the best possible manner.  He also announced that in future, all the vehicle owners will have to get a roadworthiness certificate every year that would ensure safe travelling on the roads and this program will soon be made mandatory.

The government of Pakistan is willing to take all safety measures and implement the newly launched strategy to ensure saving 6000 lives that are otherwise lost in road accidents. It is also the need of the hour to make roads network much safer in the country. The strategy is supposed to be implemented in collaboration with the provinces and sustained efforts would definitely help in making the road networks of Pakistan, safe to travel. Let’s see if this road safety strategy gets implemented over the years or remain as another part of planned strategies of the government.

Stay tuned on Pakwheels for more updates. Drop your thoughts on this story in the comments section below.