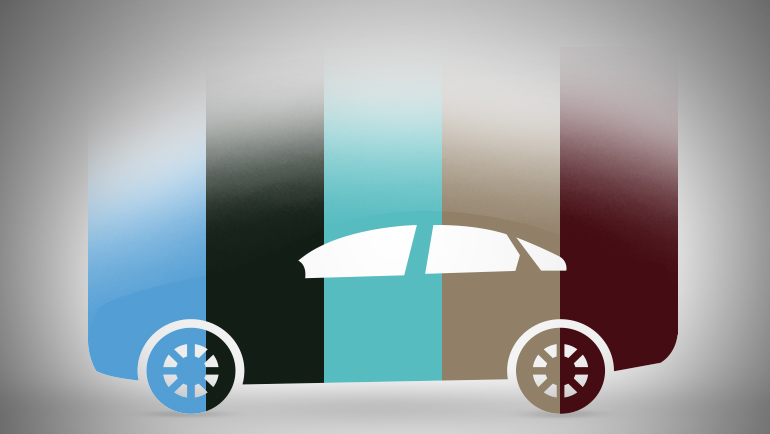 Popular Car Colors Of The Past – There Was More To Them Than Today’s Few Shades Of Grey!

With just a handful of new vehicle options, our automobile market severely lacks variety. Excluding the used Japanese imports which started to flood into our market since last decade, and the elimination of Nissan, Mitsubishi, and Kia, the game just revolves around City, Civic and Corolla in sedans, whereas Suzuki offers vehicles from the PTV’s Black n White transmission era.

With the presence of only a few options, year after year, the ability of a Pakistani auto buyer to go against the flow is being significantly reduced. So much so, that not only they have lost the ability to choose a different brand, they now cannot go for any different color either. If we observe the number of new vehicles on our roads, almost all of them will either be Silver or Grey, or Black and White.

Also Read: Used Car Buying And Selling Can Be A Unique Experience, Here Are Few Of My Stories. Enjoy!

People have the opinion that opting for an out-of-market color will affect the resale value of their cars. This stands true if you go out to buy a Magenta, Orange or girly colors of imported cars like Pink or any other weird color. However, there were several good colors on offer by manufacturers which were simply ignored by the typical buyer in recent times.

If we look into the past, there were several colors which were extremely popular among the auto consumers but as the time progressed, they got phased out and all that is left today is nothing but a few shades of grey. Let’s try to recall some popular colors that were available in locally assembled vehicles and were discontinued later on. 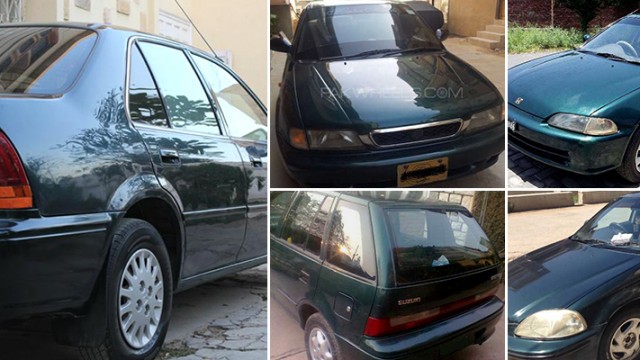 This color was first offered by Honda when they launched the 5th generation Civic in 1994. It was an entirely new color for buyers and people literally went crazy over it. It was one of the most popular colors of its time, and a majority of yellow cabs which were converted to private vehicles in the 90s were bake painted into Sherwood Green. Honda continued to offer this color in their 6th generation Civic as well as City SX8. Suzuki also offered this color in their vehicles while Toyota had a slightly different shade called as ‘British Green’. By 2001, the color was discontinued from nearly all the local cars and today it is considered as one of the most undesirable colors. 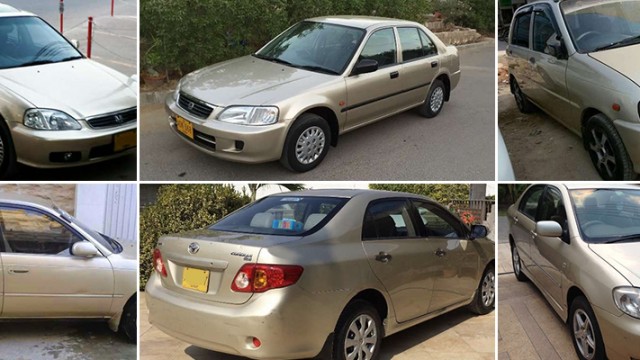 First introduced in 1996 by Honda in their 6th generation Civic, the color quickly became popular in our market. It was kind of a de-saturated golden color which looked quite decent, and being in a lighter tone was easy to maintain as well. Toyota offered a similar shade which they called as ‘Flaxen Mica’ was available in Cuore, 7th generation Indus Corolla, 9th generation as well as 10th gen Corollas. In the 11th gen Corolla, it is available in Altis Grande only. Currently this color is unavailable for most vehicles of our market. 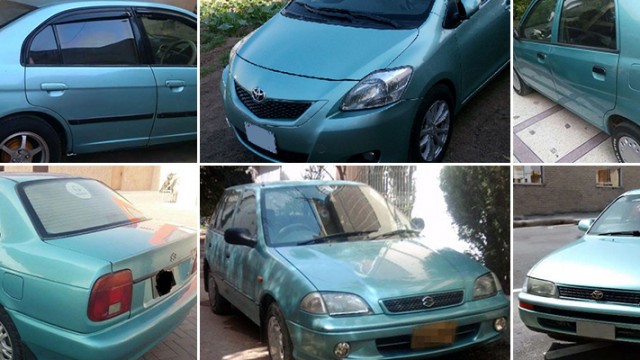 This color was first offered by Toyota in 1997 and was later picked by Suzuki and was available in Baleno, Cultus and Alto from the year 2000 to 2001. For a short while, Honda also offered it in their6th gen Civic facelift and 7th gen Civic as well as City up until 2003. It was one of the popular colors of the late 90s and was also available in imported Belta. Today people tend to stay away from this color. 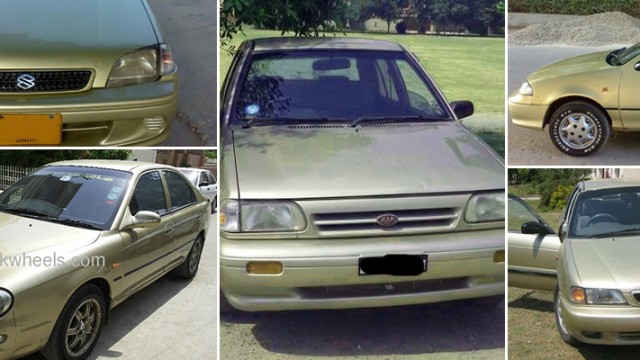 It was the color first offered with Suzuki Baleno and was later available with Cultus, Alto as well as Kia and Hyundai vehicles. It was sort of a light golden color with a greenish tint and was quite popular in the late 90s and was on offer till 2002/03. 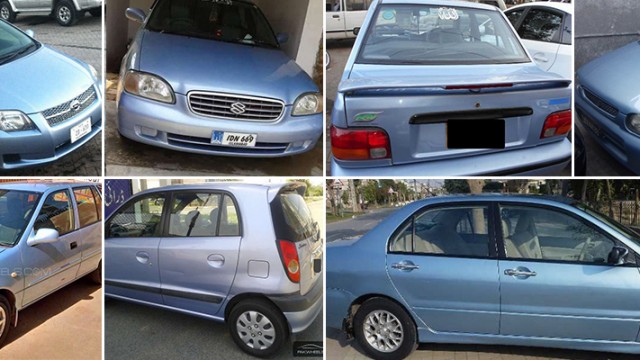 This color was widely available in Suzuki vehicles like Baleno, Alto, Cultus as well as Mitsubishi Lancer, Hyundai Santro and Kia Classic. Recently Sky Blue metallic can also be seen among imports such as Premio, Fielder as well as Belta. It was discontinued in local vehicles by 2005 and currently no local manufacturer is offering this color, although it looks decent and should be offered with new vehicles. 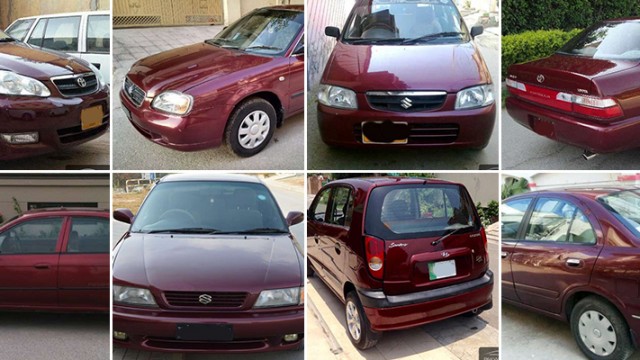 It was first offered by Honda in 1995 for their 5th gen Civic and remained quite a popular color for more than a decade. Several local cars including 7th gen Corolla, 9th gen Corolla, 6th gen Civic, City SX8, Spectra, Santro, Classic, Baleno, Cultus, Alto, and Sunny were offering this color. It became unpopular by the end of the previous decade, and now it is hardly available in any of the vehicles made locally. 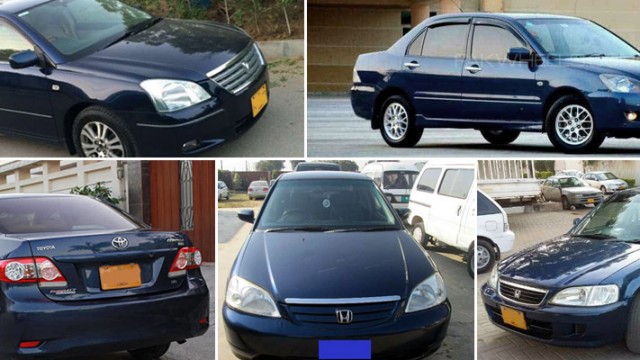 It was available in Honda Civic 5th & 6th generations, as well as early 7th gen models, City SX8, Mitsubishi Lancer as well as a slightly different shade used in 9th and 10th generation Corolla called as Strong Blue. Imported cars such as Premio, Fielder are also available in this color. Currently, Toyota was offering this color with their 11th gen Corolla, but there are a very few of these on roads. Hence, it’s quite a rare color today.

These were some of the colors that were popular in their times but were later phased out of the market. Our automobile market is starving for variety. New options, new manufacturers, new colors are badly needed to enrich our automobile market; people need to be bold enough to go against the flow. And it doesn’t take much to choose any other color over an ordinary one. Colors are shades of our perception; they are the phenomena of visual insight. With color, you can either choose to be among the ordinary, or become unique and exclusive!