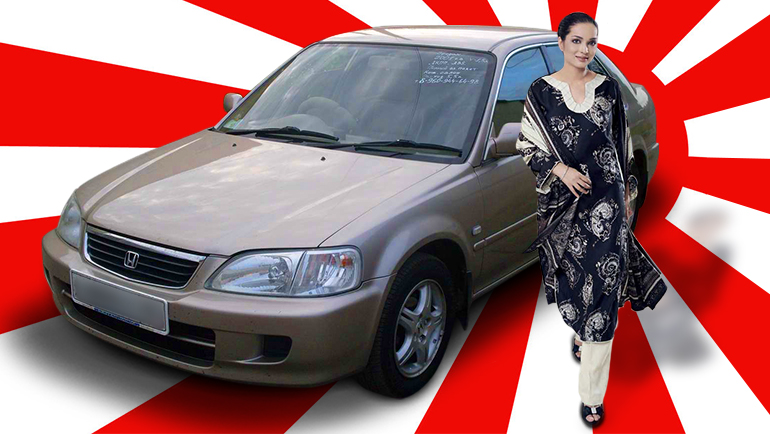 Honda City, Amna Haq And A Whole New Type Of Car For Pakistan

When the local assembling of automobiles started in the early 90s, manufacturers started assembling the cars that were already available in the market back then and already had good reputation among customers here. Suzuki started with Mehran, Khyber, Margalla, Ravi and Bolan all of which were available in our market since the 70s and 80s. Toyota started with the Corolla, which was available in Pakistan since the early 70s while Honda took off with Civic, which was available since the late 70s. It was obvious that auto assemblers wanted to avoid any risk in the early years by starting with a totally unfamiliar model. Competition however, lacks since then; Suzuki Khyber was the only 1000cc hatchback, Mehran was the only 800cc economy hatchback. Suzuki Margalla was the only option available in the entry-level 1.3-liter sedan market. Toyota Corolla though was available with 1.3 and 1.6-liter engines but was priced way above the Margalla hence was in a different league altogether. Honda Civic was only available with the 1.5-liter engine and above, contrary to the Civics of the 80s that were available in 1200cc and 1300cc engines.

RELATED: 1980s: An Era Never Remembered For The Variety of Cars That Pakistan Had

How City Was Built

In January 1997, Honda decided to tap the entry level sedan market by launching the City, which was something totally new to our market thus offering an added option in the sedan segment. For a car buyer in Pakistan, it was a name never heard before. The ‘City’ name was first used by Honda to sell small hatchbacks globally that rivaled Nissan March in the 1980s; however that car was retired by the year 1993. The ‘City’ was resurrected in 1996 under the code name SX8 specifically designed for the ASEAN markets. Instead of spending more resources on developing a completely new car, Honda grabbed the previous EF-series Civic chassis, their proven D-series engine and restyled the interior and exterior to give the car a fresh look. The bumpers were made in three separate pieces to allow for easier shipping from Japan. It was offered with a 1.3-liter carburetor engine and a 1.5-liter EFI version called the ‘Neo’ and was considered one of the fastest locally produced cars. A “Hyper 16” sticker was pasted on the rear windscreen of these cars since the engine was a 4-cylinder 16-valve unit. The good thing about the City was that even the base 1.3 EX version was fully powered.

Honda ran massive campaigns to launch the City using billboards, large press ads, and TV commercials. The response was overwhelming; City quickly became a popular car in the Pakistani market. Suzuki Margalla, which had sales well above 6000 units, a year before 1997 was dented so badly that it managed to sell just around 3000 units a year in 1997 and 1998 and was eventually replaced by Baleno. It is quite interesting to know that the City was priced well above the Margalla, but lower than the base Corolla XE (which came with manual windows and black bumpers), still it caused a major blow to the Margalla, while not affecting much to the Corolla. 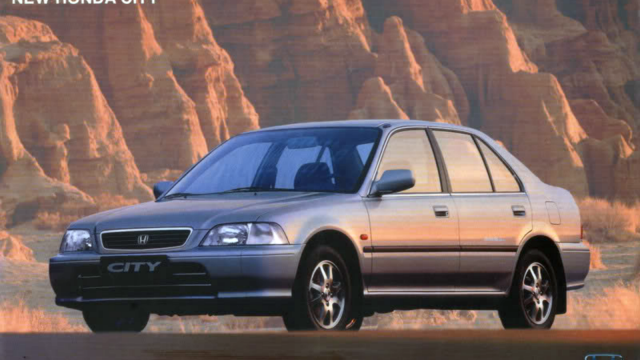 The Power And The Suspension That Helped Complete The Package

Honda is generally known for their sharp, aggressive designs, but the first City SX8 was stylistically one of the simplest and decent looking Hondas to be produced. Though the rear end seemed a bit dull, it was well synergized with the existing Honda lineup of that time. The engines were powerful enough for daily commutes and comparatively smoother than the existing 1300cc carburetor rivals of that era. It offered a class leading luggage volume. The low hood height provided excellent visibility for the driver, the five air-conditioning ducts provide better and quick cooling, the power steering response was good, and the handling was probably the best feature of the SX8 City. While it lacked electronic assisting gizmos, the mechanical setup from the McPherson struts provided sufficient amount of grip and composure in the corners.

The Interior: A Dull Place To Be

The interior was probably one of the weakest areas of the car though it offered easy to access and straightforward controls, some useful storage compartments but lacked cup holders and center armrest for the driver. The interior was all too gray and dull, though the door locks, handbrake, and steering had some chrome accents, still the interior left a lot to be desired. The power window switch came from the 88 Civic and with its vertical orientation was too odd to operate. Nevertheless, the City created a stir in the market and went on to become quite a successful car. Since the SX8 was largely based on the EF Civic, most of the parts including suspension, wheel bearings, clutch cables, brakes, etc. came from the Civic and thus were frequently available in the market. 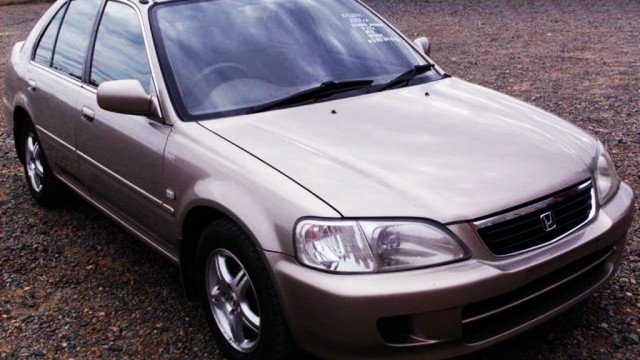 City Receives A Facelift: The Most Popular City Yet

Three years later the popularity of the SX8 City was taken to next level when in January 2000, Honda brought the facelift here. The launch of the facelift City also included a promotional song featuring the then supermodel Amna Haq, which was aired on local TV channels by Honda back in those days (Watch the video below). The shortcomings of the first SX8 were very well addressed. Exterior wise the car was transformed from a sober looking sedan into a typical aggressive Honda now featuring bold crystal headlamps, different rear combination lamps while the 3-piece bumpers were replaced with a single unit bumper design. Stylistically the facelift SX8 is undoubtedly one of the best-looking Hondas ever to appear in our market. The interior was now offered with a 4 spoke steering wheel, slightly different instrument cluster and upgraded door panels and power window switches.

The Only Honda Without Power Windows To Be Assembled Locally

This time, though, there was no 1.5-liter engine for our market, but the 1.3-liter engine was now available with Programmed Fuel Injection (PGM-Fi) and was available in manual as well as automatic transmission. Although a 1.5-liter VTEC engine was available in other markets, but it was not offered in Pakistan. Still, the 1.3-liter PGM-Fi unit was nimbler than its carburetor predecessor and more fun to drive. A stripped down version without power windows was also introduced, and that was probably the only locally produced Honda without electric windows. The City weighed just under 1000kg thus offered a great balance and impressive fuel consumption. Despite being out of production for about 13 years now, the SX8 City still holds quite a decent resale value. With its low-slung body, light weight, responsive engine, excellent suspension setup and striking looks the car was a complete package within itself. 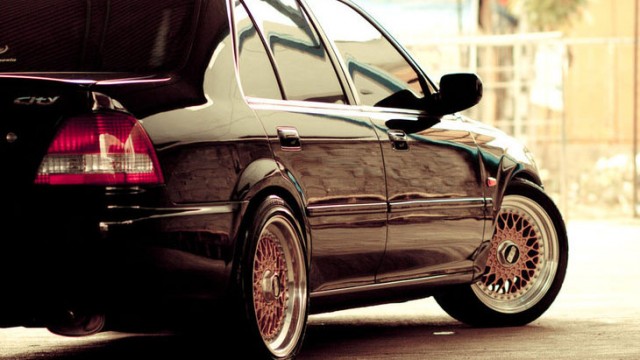 The City has evolved over the period of time, and has become a concrete choice in the entry level sedan market, not just in Pakistan, but everywhere else it’s offered. Being an established brand name, people buy the car in large numbers and wait desperately for the new model to arrive. But at the time when no one knew about it, the SX8 was the one which created the name for City. It was a game changer, a car that redefined the entry-level sedan market here. The SX8 City without any doubt is one of the best cars ever to grace our roads.

I am humbly thankful to my ex-colleague Amin Shalwani for providing me this video as he was part of the production team that made this music video some 16 years ago.