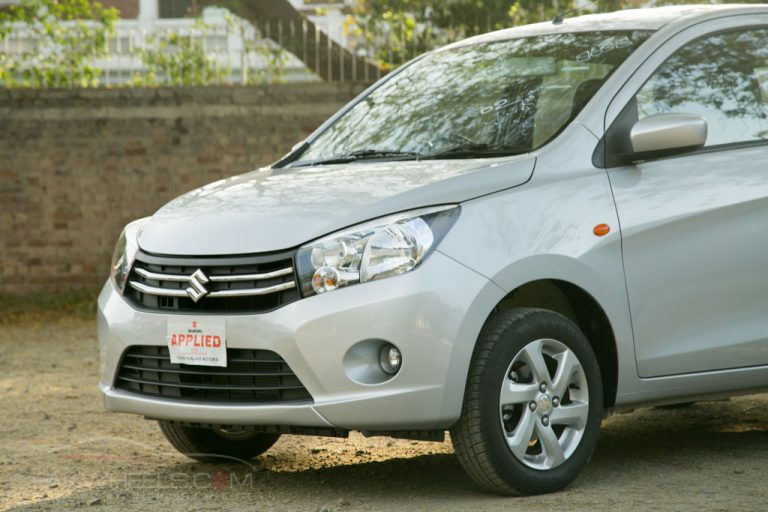 The first generation of the Suzuki Cultus was launched in 2000. For seventeen years only this one generation was active.

Today, we are reviewing the AGS variant. It is important to note that the AGS technology is only available in the VXL version, whereas manual gear is available in both the VXR and VXL variants of the Suzuki Cultus.

The Suzuki Cultus VXL is truly a fine-looking vehicle. The car has a beautiful chrome grille, amazing headlights and comes with fog lights. Overall, the exterior looks like a miniature version of Suzuki swift. You can also say that it is a cross between Suzuki swift and Suzuki Wagon R.

The VXL has 14-inch alloy rims on its tires. The car has beautiful character lights. It has very pronounced backlights. These are crystal lights. The roof has high mounted brake lamps which give an excellent illuminated light when you apply the brakes.

Overall the car’s appearance is very aesthetically pleasing. Something that I have noticed is that the roof is slightly bumpy in this car. In other cars, the roof is usually completely straight.

The inside of the car seems wonderful to sit in. the car’s dashboard has great quality.

As compared to the previous Suzuki Cultus, you will feel like you are in a high standard car.

There are two tones for color: grey and silver. The silver lining can be seen along with the dashboard and also at the AC vents.

The car’s speedometer area is also very nice. RPM has a small area. The main meter, which is the largest, is the speedometer. Next to this is the information cluster which shows the gear shift, which gear is in use while the car is being driven as well as what mode, whether it is in manual drive or auto.

The Suzuki Cultus VXL variant comes equipped with a head unit, which has Bluetooth, USB port, Aux cable and all forms of connectivity. Below this, you can find the AC buttons. The car’s AC is non-digital and normal. Underneath this is the 12Volt charging dock. Next to this is the storage space. Underneath that is the gear lever.

Car side mirrors are auto adjustable. The control is available in a panel in the door.

The drive is very smooth. The car has optimal power. You won’t feel like the car is underperforming. The car’s suspension is also remarkable. The response of the car driving over speed bumps, potholes or damaged roads is extremely good.

The gearbox has three modes: reverse, neutral and drive. Normal transmission in automatic cars has a park option. It is important to note, this car does not have that.

Before driving the car, I thought that with the automatic gear a 1000cc engine will have less torque. However, after driving the car I think it has optimal power.

The fuel average of an AGS car is much better than a normal automatic transmission car. This is because there is a lot of energy wastage when someone is about to change the gear due to torque converters.

In this case, there are no torque converters. Instead, there is an intelligent shift control actuator motor, which acts as a clutch. The moment you take your feet off the paddle, it sends a signal that you want to change the gear. This allows it to automatically engage in the next gear. So, without any lag, any energy wastage you can change your gear.

AGS technology is most beneficial in long traffic jams when you want to avoid driving manual and don’t want to tire out your foot. Hence you can drive easily and peacefully in long lines., without affecting fuel economy.

In this segment of the car, users value fuel economy a lot, as opposed to normal automatic transmission. Thanks to AGS technology in the Suzuki Cultus, the fuel economy is 14-15km/L in the city, and for long 17-18km/l. Cultus has a 3cc cylinder water cool engine.

The seating is excellent. The cushioning of the front seats is very soft. The posture for the seat is remarkable. The knees and the dashboard have considerable distance between them. The steering wheel is adjustable according to your height or driving position. Even when I had it at its lowest position, my legs were comfortable and had decent legroom. The driving posture is very user-friendly. There should be no issues while getting in or out of the car, in my opinion.

See the review of Cultus below:

The car has excellent size for people who will drive in high traffic areas or narrow roads and alleys. The size is nor too big nor too small. Maneuvering is easy. Road grip is very good, and it never feels like it is getting out of your control. The previous Cultus didn’t have a road grip as good as this.

There is no issue with ground clearance. You can go over speed bumps very easily.

The boot of the car can fit three bags: one large, one medium and one small bag. To get even more space, you can remove the tray in the back, fold the seat and create more space for the luggage.

The headroom is good for entry and exit, allowing easy entry. The Legroom is also good when you adjust the seat. There is considerable legroom available in the front seat. When the front seat is pushed all the way back, the back-seat occupants will feel comfortable. For a tall person they might have slight issues but someone with an average height they will fit just fine.

Entry and exit from the back seat are easy because there is a lot of headroom. Based on the people test, we found that three people could sit inside. However, this would be a very tight fit for a long trip. This test was conducted with the front seats all the way back. Two adults in the front can fit easily. If the seat isn’t pushed all the way back, the back seat will have optimal space.

The cost of a Suzuki Cultus is 1543000 rupees while the cost of a Suzuki swift is 1591000 rupees. Based on the difference, a lot of people might think this car is very expensive. However, compare the cost of ownership. Being a 1000cc car, this car falls in a lifetime token category. The Suzuki Swift is in the 1300cc category, so the token is more expensive and spare parts are tougher to find. Fuel consumption also has a 30-40% difference. Based on the consumers this car is a far better choice.

Compare this car with a Vitz, or a Mitsubishi Mirage, this car is cheaper in cost for importing. Those cars also have more expensive parts. This car has all the features that come in an imported car such as dual airbags, brake lights, etc.

See the owner’s review of Cultus below:

Compared to the previous Suzuki Cultus, this car has achieved perfection in every department.