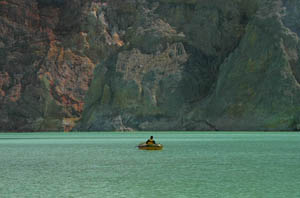 Located in a crater in the mountains, the Kwah Ijen lake is the largest sulfuric acid lake in the world which has an actual pH level of 0.5 and as soon as you put an aluminum can in the acid/lake, it begins to sizzle and bubble. Within 20 minutes the material is eaten away to the point of it being as thin as tissue.

Despite the unforgiving environment to work on, there is heavy mining of pure sulfur going on over there and miners are being paid as much US $ 10 a day for extracting and carrying huge loads of sulfur.

Clouds of sulfur dioxide gas are all over the area, and it’s considered one of the most dangerous places in the world to work in even though the sulfur dioxide gas is so heavy in the air that people have problems to breathe even with gas masks on and the miners instead of the gas mask use a wet rag to breathe through.

So you may refill your battery over here but if you think you have the toughest job in the world than check out the rest of the pictures over here.

Triple digit barrier will be broken after hike in petrol price