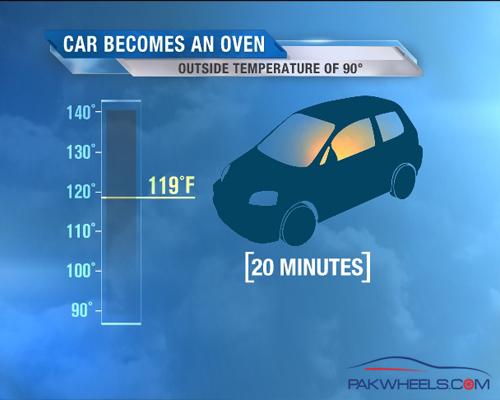 The hot and humid summer of Pakistan is nothing new to all of us. Temperature soaring to nearly 50C (122F) is normal in many parts of the country. The heat index as well as the crowded areas like shopping centers with so much air conditioning and the vehicles in such areas idling or moving through these congested areas create the environment more unbearable. I am sure everyone has witnessed it.

Anyways, a close friend of mine was in Rawalpindi Saddar and he left his toddler in a parked car on Bank Road in open sun a few weeks back. He went inside a shop and came back after 10 minutes and his son was almost fainted and was near a heat stroke. The news pushed me to initiate this fact that cars get very hot inside. Much higher than the outside temperature. I went over a lot of data and thought to share some.

Please don’t leave your kids/ older people or any pets in the car even if you leave for 10 minutes. The body will dehydrate very quickly and any accident can happen. I will also recommend not to do idling I mean running AC while car is parked. You are burning the environment as well as wasting your hard earned money.

It’s also recommended to leave your windows little open for the open passage of the air if you park your car in open. Radiant energy from the sun pass through the glass and make the interior hot. Because there are few reflective surfaces in the car, much of the energy is absorbed rather than being reflected out. With restrictive airflow, the energy stays in the car. The result is that the energy heats up the interior of the car faster. It is important to note that the outside temperature does not have to be really hot for a car to become an oven-like death trap. Even temperatures considered mild can lead to death during an extended period of time.

Below I am going to share some slides (taken from Weather.com). The slides show the temperature difference. 90F (32C) which is the outside temperature. In US since start of 2014, 30 deaths have been reported already. In Pakistan, the temperature outside are in triple digits Fahrenheit so you can imagine the danger.

When Copy-Paste Goes Wrong: Vehicles At The Shandong EV Expo In China