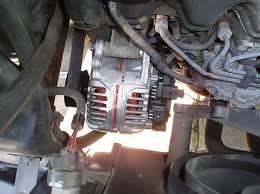 Vehicles Alternator and how it works

Alternators are one of the most important electric equipments of Vehicles which is a source of power of all the internal accessories of Vehicle.  Number of people asks questions such as why does engine takes load once they turn on headlights, is it weak battery or problems with some other parts. Different answers are posted on forums but they are misguiding for the vehicle’s owner but somehow he agrees on the answers which are given by multiple users.

I intend to explain little bit about vehicle alternators, how does it works and how does it differs from generators. Alternators have two physical components such as Rotor and Stator. Component that rotates inside alternator is called Rotor and component which is attached with the body of Alternator is called stator. Coils of wire responsible for producing magnetic field are called Field and coils of windings responsible for producing power is called armature. Within body of Alternator, field is on Rotor where as armature is on Stator. Rotor can be made up of permanent magnet or it can simply be turned into electromagnet through current passing through slip rings into rotor windings. According to Michael Faraday, once magnetic flux changes on conductor then it produces electric field which is a basic principal behind operation of Alternators, generators and Transformers etc. Numbers of people tend to confuse armature on Stator and Field on Rotor whereas in generators armature is on Rotor whereas field is on Stator.

Things have been classified into different names according to which way you want to extract power from this equipment. Obviously one has an advantage over another way. Generators have commutators which has different metallic portions linked with different sections of rotor which outputs DC  current whereas Alternators have Slip rings which transfers the current from battery to rotor electric coils.  Commutators are bound to fail on high RPM as metallic strips can fly around causing serious damage that’s why ratio of pulley on engine side to generator side is such that if RPM of engine is 2000 then that of generators would be 1000. There are more moving parts which are bound to fail on a generator that’s why Alternators are preferred over generators.

Alternators on other hand have internal regulators which regulate the current and Voltage supplied to the Rotor thus controlling the magnetic field and eventually the maximum power produced by Alternator. Since Alternators can spin at high RPM thus producing more power that’s why ratio of pulley towards engine side and that towards alternator side is such that if engine has an RPM of 1000 then Alternator will have an RPM of 2300 roughly and not to forget that there is very few moving parts on Alternators thus probability of failing is much less than that of generators. Few alternators have internal exciters where exciters armature is attached on same shaft of Alternators rotor. Thus configuration of armature on exciter is different from that of Alternators where armature is attached on main body of Alternator. Advantage of this configuration is very less current is required by exciter to power alternators Rotor. In few cases, once initial power is taken by battery to power rotor then after wards minimum power from alternators is taken to fed into exciter or back to the rotor. Once alternators have built in exciters then basically you are avoiding slip rings and brushes which normally wore down with passage of time. Most Alternators produces three phase AC current which is converted into DC through sets of diodes.

Enough of the technical descriptions but it was necessary as well. Now, what happens is that once RPM of engine is 1000 then RPM of alternator should be between 2200 or 2300. As already discussed that alternator produces more power at high RPM but manufacturers once design an alternator for specific vehicle then they keep this in mind that Alternator should be able to take load of entire electric accessories inside the vehicle at idling RPM. Now, once more power is available at high RPM then this should technically burn most of the accessories present inside vehicle due a more current passing through the circuitry then required. That’s why alternators have internal regulators, which regulates the current to Rotor Field (coils of wires on Rotor) which means controlling the moving Rotors magnetic field thus directly controlling the output from alternator. Input Voltage to Internal Regulator is 12 Volts whereas output voltage to Rotor varies from 0 Volts to 12 Volts in order to control the current passing through rotors windings.  Many rotors have winding resistance from 3 to 4 ohms.

Suppose we have alternator spinning at 2000 RPM at idle Engine RPM of 800 with attached load of 10 Amperes at 12 Volts and we suppose that regulator is providing to Rotor 1 Ampere at 4 Volts to power that load. We turn on another electric accessory within vehicle such that now we need 15 Amperes of output which will causes the output of Alternator to fall from 12 Volts to 11 Volts. Regulator will sense that and in order to bring the output back to 12 Volts, Regulator needs to increase the Rotors magnetic field intensity and that it done by increasing the Voltage to rotor thus increasing the current to 1.5 Amperes thus bringing the output of Alternator back to 12 Volts. Now once RPM of generator increases then correspondingly output of Alternator exceeds 12 Volts so regulator decreases the input magnetic field to rotor by decreasing the Voltage to regulator thus decreasing the current.

That’s why once you feel that engine is taking load once you turn on headlights then problem might be with internal Alternators regulator which can be easily fixed by replacing the regulator from some shop. Batteries within vehicle are primarily used for starting and powering the electric equipments once engine is off. Once key is left at starting position with engine off then basically you are sending the current to Alternators Rotor that’s why batteries fails earlier once left in this position for longer with engine off.

Ten Lamborghini pictures that you wouldn’t want to miss