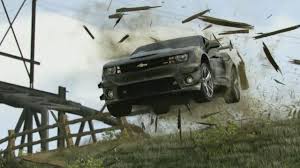 As far as car racing video games go, hardly any game has come close to beating Need For Speed type of game play although it isn’t such a great game compared against the likes of Forza and Gran Turismo, but somehow it manages to keep the hype of MMO Racing that is difficult to explain.

Now though, there’s a new contender on the block. The Crew. Being Developed by Ubisoft, may finally make EA’s Need For Speed a run for its money.

This walk-through trailer of ‘The Crew’ released and the name of the game suggests that the game will feature a story like Fast and the Furious; where there’s a crew of four people, bounded by friendship and love and bro-hood, form a crew and go on stealing things about on the highway.

It’s east to expect a movie on this game as well.