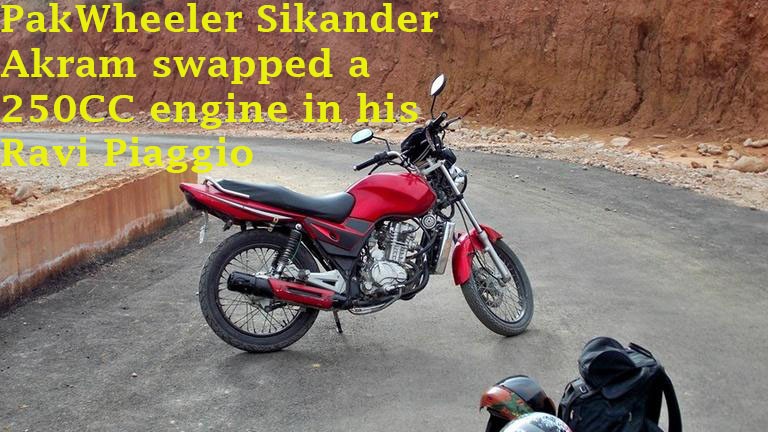 I was looking for a bike for a friend a couple of weeks ago, and we were confused between Ravi Piaggio 125 and Suzuki GS150. During my search of current owners and their reviews, I came across a thread on PakWheels forums about a PakWheeler who has swapped a 250CC water cooled engine in his Ravi Piaggio, replacing its current air cooled 125CC engine.

I was not only amazed but was very impressed by @Silver_Knife, whose real name is Sikander Akram, the member who not only initiated something like this but did most of the swap himself. The purpose of this blog is to bring light to the effort and dedication of a proud owner of a vehicle who decided to work on his ride on his own, rather than discarding it after the use.

If you want to comment or ask the Sikander about his engine swap, you can see the thread here.

But first, a brief background to the story before the actual photos of the swap. @Silver_Knife writes that he felt the previous 125CC engine was losing its power and was consuming motor oil. An opportunity arose and he was able to get his hands on a 250CC version of the engine, that would be a bolt on fit to Ravi Piaggio chassis. A fellow PakWheeler, @vickytulla, helped him source the required engine out, and rest is history. According to Sikander, he has been to several long trips since the swap, and found the bike better than ever. Enough with the talk, let’s get to the photos of the swap. For all the technical details of the swap, and to contact Sikander, you can visit is thread mentioned above.