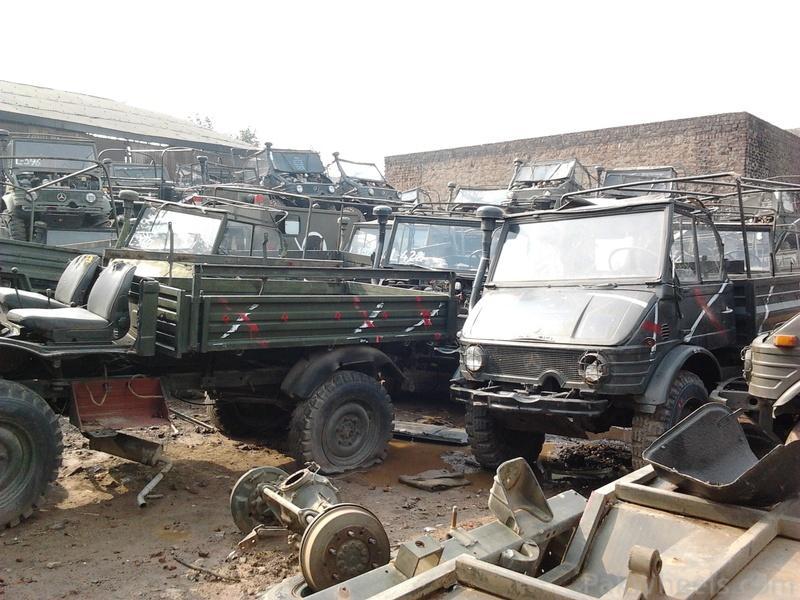 A scrap yard full of unsung heroes of 4×4

The G-class is a truly capable machine but there’s a problem with it which it shares with Cayenne, it is too expensive and ostentatious. Therefore, when it comes to some true off-roading on expeditions, exploring or some 4×4 fun, even the Cayenne owners have been spotted with having Land Cruisers, Patrols or Pajeros.

These cheap and easy to maintain classic 4x4s took so little and did so much that wars have been fought and won because of the mobility they provided.

The Chad war a.k.a Toyota war and then the recent Libyan uprising used Toyota pickup trucks making it loud and clear that Toyota’s 4x4s still have it but the people of 4×4 I know, speak a different story.

There has been an underdog which everyone missed. It was a prime 4×4, slow and noisy but a lot durable and reliable under harsh conditions where even LC or Land Rovers couldn’t match up. It is the toughest 4×4 you’ll know, they’ve tested it during duress and it came out to be their best friend even with a broken clutch, (616 and 352) engine over-heating, it doesn’t affect the Unimog, infact all Mercedes of olden days can stand any sort of torture, leaky radiator, busted clutch, dragging suspension, stupendous blowby (enough to shoot off the oil cap if loosened) anything etc etc.

Pakistan army also had a dozen of 406 mogs, while some are still in operational duty however, Pak Army has called off all the Mogs and this scrap yard is flooded with Mercedes Benz 406 Unimogs which actually exceeded everyone’s expectations and went wherever you can only walk to.

All these Unimog are auctioned off for scrapping purposes however, some even say that if you’re lucky, you’ll even find a turn-key Mog in the scrap yard since Pak Army has disavowed the most bad-ass 4×4 machine, big enough to take whatever size the cargo.

But why are they not so well known even amongst the people who are into 4x4s? The parts will be a problem and you need to be a great mechanic as well (even Mcgyver) to get it to work nicely, the engine is dead bolts easy, (lazy though) same 616 engine from a 240D sedan. The big headaches start with correct settings, gaskets and lubes for the trans, gear-case, transfer-case and hubs.

It has a pretty bad mileage as well due to short gear and underpowered engine and that gets worse when the going gets rough while the top speed is another hindrance as well.

Than its ugly, alright it does look hardcore but it isn’t pretty either and the new ones are however plain ugly as Mercedes tried to cash in the cult of 404, 406/416 and the 435s Unimogs created, by making the newer look more luxurious with leather and shine for some Sheikh’s desert dwelling while in reality, all it looks like is a farm vehicle.

PS: Still I am unsatisfied with why these monster 4x4s are not so well known and held as precious as LCs, etc. Anyone else with some better insights?