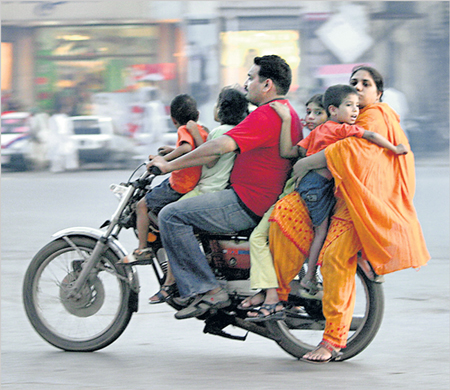 The other day, I was going home after work when I saw an unusual sight. In front of me was a man with his family. The family included his wife, and 3 kids of varying ages (all minors) plus 2 heavy bags of groceries. It would be a common sight had it not been for the fact that he was on a Honda CD-70.

One child was in front of the man, one was almost on the speed-o-meter and one was behind him followed by his wife. The man himself was sitting on the fuel tank with two heavy grocery bags on each side of the bike handle.  Now with all this, the person was struggling to steer the bike, and heavy traffic made his job even more difficult. He nearly missed a car from the opposite lane, and had huge trouble maneuvering the bike in the stop-and-go heavy traffic. To add to the dangers, only he was wearing a helmet which was in very deplorable condition and had visible signs of wear & tear as well as damage. Suddenly, a car in front of him braked hard, and owing to the inertia of the bike and his situation, he could not stop in time and bumped into the car, giving it a slight dent. There was a usual drama on the road, which I did not stop to see and went towards my destination.

Now my general question is, why do we people do this? Is it safe? Before you bash my skull saying that a poor person cannot afford a car and blah blah, let me ask you, is traveling like this more important than your life? Can a bike run smoothly and safely with 5 people on board? Is it designed that way? What if (God Forbids) the bike hits something, or has to apply emergency brake, what will happen to the child in front? Or what if the bike gets in an accident in general? What will happen to everyone on the bike, especially the kids? I have seen so many bike accidents that turned out fatal.

In my opinion, the government should enforce a rule which forbids more than 2 people and a minor on a bike. Anything above that should not be allowed. I know this rule is somewhat practiced here, but it is never followed in spirit. The only time it is followed, sadly, is after a terrorist incident or security threat where the television tells us “Double sawari pe pabandi lag gai hai (A ban has been imposed on pillion riding)”.  If you have to move with a bigger family, please hire a taxi for that purpose, not for your own safety, but for the safety of your family.

Secondly, a helmet should be mandatory for every passenger on the bike, and not just the person driving it. This rule is followed worldwide, where the driver and the passenger of the bike MUST wear helmets and this is enforced by law. This should be implemented here as well. In case of the accident, an overwhelming majority of the deaths occur due to head trauma and brain damage, which can be minimized to a great extent with the use of helmets.

Moreover, the government should force automakers to introduce a car on the lines of Tata Nano. A car which could bring a 4 wheel transport in reach of the masses, as the prices of even used cars in Pakistan are exorbitant. This could greatly reduce the number of bike related accidents on the roads and ensures safety of bikers as well as other motorists.