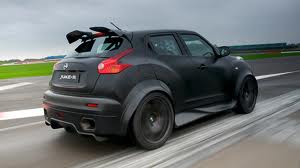 When Nissan UK executed the project of converting a normal shopping trolley into a uber racing machine, they took  Nissan GT-R’s parts like the engine, electronics, drivetrain and transmission and put them into the Juke. Which probably is thought as the ugliest car in the current Nissan line up.

And then the looks became secondary as the Juke became Juke-R, an ultimate track racing crossover SUV which apparently showed Mercedes Benz SLS AMG, Gallardo and 458 Italia the trails of dust as it moved faster than all three.

But Nissan never had any plans to put the Juke-R into production when it called many significant automotive journalists to test-drive it in Dubai however, a car developed in UK and than brought to Dubai for auto-journos to test drive does ring a few bells that indeed Nissan was looking for potential buyers and where else could you possibly find buyers for crossover SUV on steroids? Middle-east of course.

Apparently they have 3 offers, all from Dubai, where the car was shown in January and a series of videos were shot on closed roads as the Juke proved to be quicker than a Gallardo, an SLS AMG and a 458 Italia.

The Juke’s marketing manager, Gareth Dunsmore, said that “with such a strong reaction, and with three genuine offers on the table, we decided we had to make the concept a reality.”